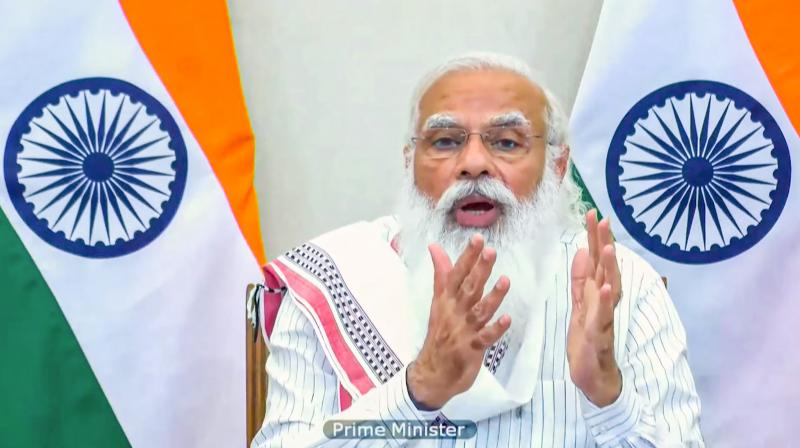 New Delhi: Crowded marketplaces and hill stations may be good for a revival of the economy, but they are also a cause of worry and an invitation for a possible Covid-19 “third wave”, Prime Minister Narendra Modi said on Tuesday as he expressed concern over people crowding at hill stations and markets without wearing masks or observing the social distancing norms. He urged all citizens to guard against complacency to prevent a third wave of the coronavirus.

India on Tuesday recorded 32,906 fresh cases of Covid-19 and 2,020 deaths. The big jump in daily fatalities was because Madhya Pradesh revised its Covid-19 death data. MP is the third state after Maharashtra and Bihar to revise its Covid death figures.

“If we remain cautious and take precautions, we will be able to prevent the third wave… there should be no compromise in this,” the PM said during an interaction with the chief ministers of the northeastern states on the Covid-19 situation.

The interaction was attended by the chief ministers of Assam, Nagaland, Tripura, Sikkim, Meghalaya, Mizoram, Manipur and Arunachal Pradesh. The CMs briefed the PM about the progress of vaccination in their states and the steps that are being taken to take vaccines to far-flung areas. They also discussed the issue of vaccine hesitancy and measures being taken to overcome it and gave an assurance of taking timely action to bring down the positivity rate as well as the number of cases in their states.

The PM expressed his worry over the growing number of cases in some districts and stressed the need to detect these signals and take strict action at the micro level. He stressed the need for “micro-containment” protocols in dealing with the situation and asked everyone to make full use of the experience and “best practices” learnt in the past one and half years in this regard.

Noting the fast-mutating nature of the virus, the PM advised strict monitoring of the mutation and keeping track of all variants. He said the experts were studying the mutations and their impact, adding: “In such a scenario, prevention and treatment are critical.”

Acknowledging the impact of the pandemic on tourism and business, the Prime Minister strongly warned against crowding at hill stations without observing proper precautions. Rejecting the argument that people want to enjoy life before the arrival of the “third wave”, he said that it needs to be understood that the “third wave” will not come on its own. He said the main question in our minds should be how to prevent a “third wave”. “Experts are repeatedly warning against carelessness and crowding as they can lead to a massive surge in cases,” he said, strongly advocating for the prevention of avoidable crowding.

On Friday, July 16, Mr Modi will interact with the chief ministers of Tamil Nadu, Andhra Pradesh, Karnataka, Odisha, Maharashtra and Kerala to discuss the Covid-19 situation in these states. These are among the states where the infection numbers have seen an increase in several districts or have not in general seen a dip, unlike in most other states.

Dr V.K. Paul, Niti Aayog’s member (health), said, meanwhile: “The third wave is already here in the world as 3.9 lakh new confirmed cases are being reported from across the globe each day.”

The Uttarakhand government on Tuesday announced its decision to cancel the Kanwar Yatra this year in view of the pandemic. In Odisha too the “Bol Bam” yatra has been cancelled. The Uttarakhand police is learnt to have sent back over 8,000 tourists from Mussoorie and Nainital to avoid overcrowding after the visuals of a sea of people surfaced.

Meanwhile, the developers of Russia’s Sputnik V coronavirus vaccine said a deal had been struck with the Serum Institute of India (SII) to produce 300 million doses annually. The SII is also trying to upscale the production of its Covishield vaccine, and 110 million doses have been produced by July. On the other hand, Dr Reddy’s Laboratories has said it will strengthen the commercial rollout of Sputnik V vaccines in India in the coming weeks.