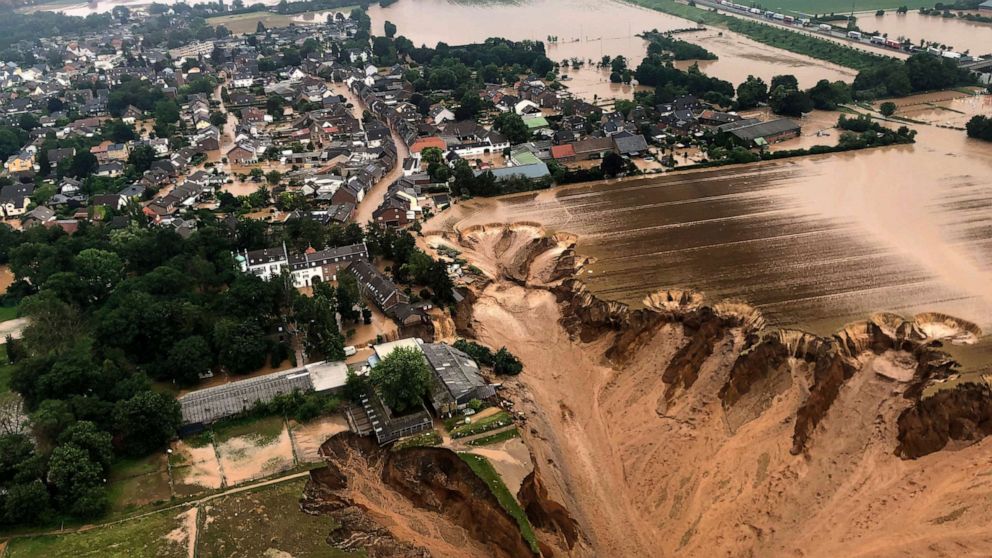 LONDON — More than 100 people have been confirmed dead while many more remain unaccounted for amid catastrophic flooding across western Europe, officials said.

Record rainfall in recent days from a slow-moving weather system has triggered flash floods in the region, particularly parts of western Germany and eastern Belgium. Swollen rivers and reservoirs have burst their banks, turning streets into raging torrents of brown floodwater that swallowed cars, homes, businesses and even entire villages.

The death toll in Germany was 103 as of Friday morning, with 60 of the fatalities reported in Rhineland-Palatinate state and 43 in neighboring North Rhine-Westphalia, the country’s most populous state, according to German news agency DPA. But authorities have warned that the figure is likely to increase.

Around 1,300 people were still listed as missing in the devastated Ahrweiler district of Rhineland-Palatinate state as of Thursday night, according to a statement from the local district administration.

An estimated 165,000 customers of Westnetz, the biggest power distribution grid company in Germany, were without electricity on Thursday, according to a statement from utility giant E.ON, which owns Westnetz.

In Belgium, the death toll rose to 15 on Friday morning, a spokesperson for the Belgian interior ministry told ABC News. Four people, including a 15-year-old, were also unaccounted for.

More than 20,000 customers were without power in Belgium’s Wallonia region on Friday morning, according to local media.

Search and rescue operations are ongoing in both Belgium and Germany.

Hundreds of people were evacuated during rescue missions in more than a dozen cities in the Wallonia region of southern Belgium on Thursday night, according to a spokesperson for the country’s interior ministry.

Meanwhile, rescuers rushed to save people trapped in the German town of Erftstadt, southwest of Cologne, on Friday, after several homes collapsed due to subsidence, according to The Associated Press. Aerial footage of the area showed what appeared to be a massive sinkhole.

In the nearby town of Bliesheim, also in North Rhine-Westphalia state, resident Vincent Thevenin said he and his girlfriend had just returned home from work on Wednesday night when a rainstorm rolled in overhead. The floodwater got up to his chest at one point, he said.

“We already saw the streets flooding, the sewers couldn’t keep up anymore, and we started to get worried,” Thevenin told ABC News on Friday. “The rain just kept coming and coming. And throughout the night, it just kept coming down and next morning, we woke up to what you see here.”

Almost every building and vehicle in town is now caked in mud and appears to have sustained some level of damage.

“You can compare this to Hurricane Katrina,” said Thevenin, who is from Cleveland, Ohio. “Everyone here has lost everything.”

Speaking alongside U.S. President Joe Biden on Thursday, German Chancellor Angela Merkel expressed shock over the scope of devastation from the flooding.

“I grieve for those who have lost their lives in this disaster,” Merkel said during a joint press conference at the White House in Washington, D.C. “I fear the full extent of this tragedy will only be seen in the coming days.”

Armin Laschet, the premier of North Rhine-Westphalia and Germany’s leading candidate to replace Merkel in the September election, blamed the severe weather on global warming.

“We will be faced with such events over and over, and that means we need to speed up climate protection measures, on European, federal and global levels, because climate change isn’t confined to one state,” Laschet told reporters on Thursday during a visit to hard-hit areas