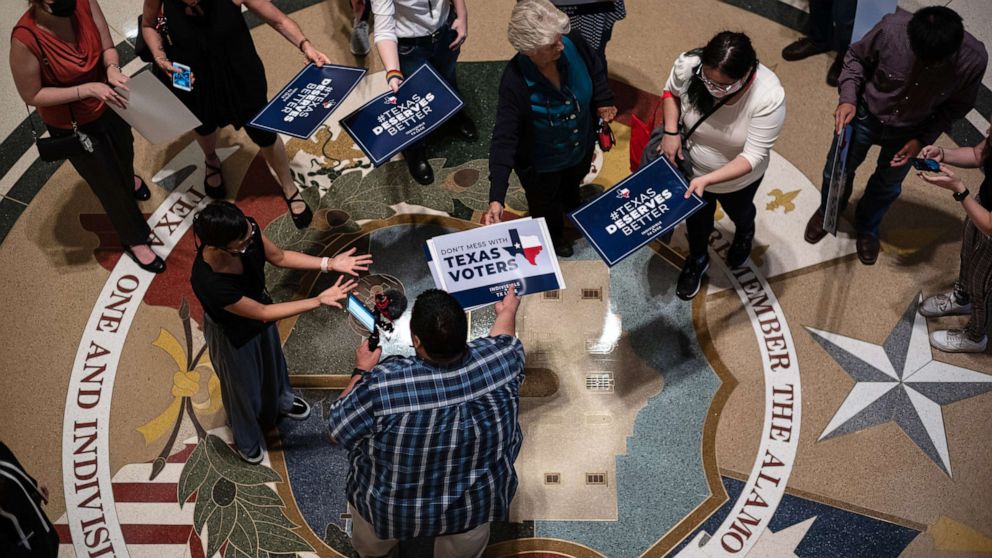 For the second time since May, Texas House Democrats will break quorum in protest against state Republicans’ push to revise the election and voting laws in the Lone Star State.

The much-speculated move was officially announced by Democrats Monday afternoon, a day before the Texas House was slated to be back in session to continue working through the items set by Gov. Greg Abbott for the ongoing, 30-day special session agenda.

“We are now taking the fight to our nation’s Capitol. We are living on borrowed time in Texas. We need Congress to act now to pass the For the People Act and the John Lewis Voting Rights Act to protect Texans — and all Americans — from the Trump Republicans’ nationwide war on democracy,” the group said in a statement.

“I applaud the effort of the Texas legislators who are standing in the way of a blatant attempt to suppress the vote,” she said.

After spending the day in Michigan, the vice president told reporters that her conversations were meant to “remind voters — to remind people that their voice is important and that they are at risk of having legislative bodies impede the right to vote, if we don’t stand up and understand what’s happening, see it for what it is and obviously, be more engaged.”

The move is being met with strong opposition from across the aisle.

“When you look at the bill as drafted — as filed as laid out this Saturday and passed out of the committee — it is a very good, strong election ethics integrity bill. I’m proud of the work we’ve done,” he said on ABC News Live Prime. “And I think if they had stayed there and taken the time to read the bill they would have known that and we could have passed this bill.”

It was also unclear what the state’s executive branch would do next. In a statement following the Democrats’ announcement, the Republican governor blasted the legislators, accusing them of engaging in “partisan political games.”

“Texas Democrats’ decision to break a quorum of the Texas Legislature and abandon the Texas State Capitol inflicts harm on the very Texans who elected them to serve. As they fly across the country on cushy private planes, they leave undone issues that can help their districts and our state,” Abbott said in a statement.

One of the issues that remains on the agenda is reinstating government funding, which Abbott vetoed in response to House Democrats last quorum break in May. The issue is already emerging as a focal point for House Republicans, with the Texas House Speaker chiding Democrats over the decision to break quorum.

“These actions put at risk state funding that will deny thousands of hard-working staff members and families a paycheck, health benefits and retirement investment so that legislators who broke quorum can flee to Washington, D.C. on private jets,” Phelan said in a statement.

According to House rules, at least two-thirds of the chamber’s 150 members must be present to conduct business. The rules also outline that if there are absent lawmakers “for whom no sufficient excuse is made,” a vote can be held just among the members in attendance for those absent lawmakers to “be sent for and arrested, wherever they may be found.”

For now, Democrats, like Texas Rep. Gene Wu, who represents southwest Houston and is among those heading to the nation’s capital, indicate the potential risk is worth it.

“This is the only tool that Republicans have left Democrats and we intend on it,” Wu said.