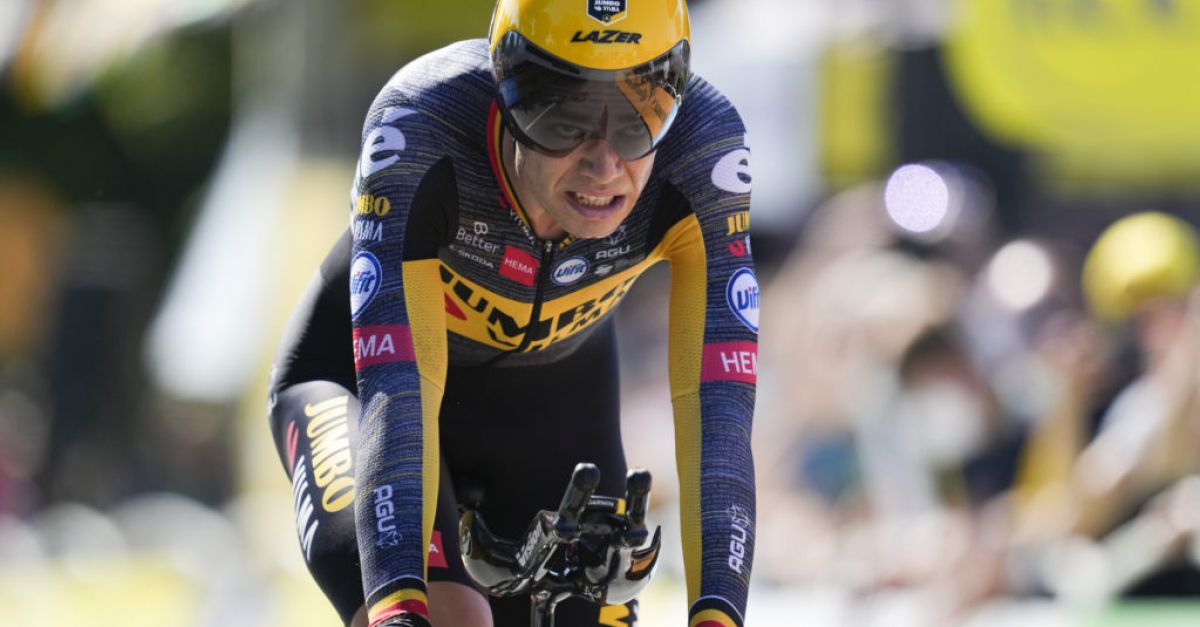 Tadej Pogacar stands to be confirmed as Tour de France champion for the second year in a row after Wout Van Aert won the stage 20 time trial in Saint-Emilion on Saturday.

Van Aert clocked a time of 35 minutes and 53 seconds over the 31 kilometres from Libourne, winning by 21 seconds from Kasper Asgreen to take his second stage of this year’s Tour after his victory over Mont Ventoux on stage 11.

Pogacar’s commanding advantage in yellow was never likely to be put in peril on the roads through Bordeaux wine country, and though Jonas Vingegaard took 25 seconds out of the Slovenian to strengthen his grip on second, Pogacar leads by five minutes and 20 second ahead of Sunday’s parade into Paris.

💛 @TamauPogi finishes his TT and will win his 2nd Tour de France tomorrow in Paris!

Vingegaard began the day with only a six-second advantage over Richard Carapaz in third but clocked the third fastest time to extend that to one minute 43 seconds.

The 24-year-old Jumbo-Visma rider, making his Tour debut and riding only his second career Grand Tour, is now in line to deliver Denmark’s first podium finish since Bjarne Riis’ victory in 1996.

Carapaz’s third for the Ineos Grenadiers will be a first podium for an Ecuadorian in the Tour.

Jumbo-Visma came into this Tour hoping to challenge Pogacar for yellow through Primoz Roglic but have recalibrated brilliantly since his week one exit – with this their best day yet as both Van Aert and Vingegaard could celebrate.

“Winning a Tour de France time trial has been one of the biggest objectives of my career and I have been really focusing on this day so I’m happy I can finish it off,” Van Aert said.

“The course suited me, it was rolling and much faster than (stage five) so it was more to my advantage. I think it was the perfect day.

“It’s been a really hard Tour de France for our team but we always fought through and in the end we’ve had three stage wins and we have Jonas in second in the general classification so it’s really an amazing result for a team with only four guys left.

“I’m really proud of how we fought.”

There was no repeat of the drama of last year’s stage 20 time trial, when Pogacar snatched yellow from Roglic on the climb to La Planche des Belles Filles, but nor was there any expectation of anything changing given Pogacar’s clear dominance over a depleted field.

Only 142 riders of the 184 who left Brest three weeks ago started the stage, many of them sporting wounds from a punishing edition of this race – this Tour has seen the highest number of riders abandon since 2012, when 45 of 198 starters failed to reach Paris.

Once Roglic went home and Geraint Thomas soldiered on after dislocating a shoulder, Pogacar was left without serious challengers, and he heads to Paris on Sunday as the owner not only of the yellow jersey but the king of the mountains’ polka dots and the best young rider’s white as well for a second year running.

✌ Focus turns to the Champs-Elysées, @MarkCavendish has finished his TT.

After the customary celebrations on the parade into Paris will come the one unresolved storyline of this Tour, with Mark Cavendish getting his final chance of this year’s Tour to break Eddy Merckx’s record of 35 Tour stage victories.

The Manxman’s return to form, and to the Tour, has followed a Hollywood script so far, so there would be no better place for the grand ending than in the shadow of the Arc de Triomphe.