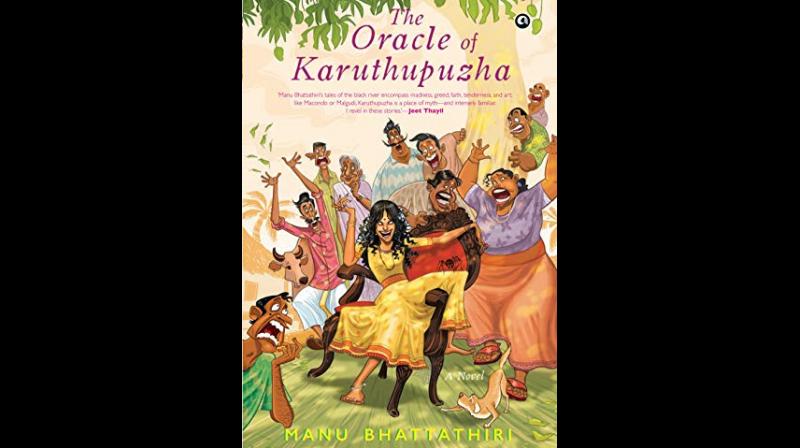 On the face of it, Manu Bhattathiri’s The Oracle of Karuthupuzha has all the elements to make it the perfect book of fiction to ‘escape’ into during a pandemic.

Karuthupuzha, a quaint Malayalam-speaking town full of idiosyncratic characters, is after all a tremendous effort at world-building that Bhattathiri has undertaken now over three books. This is his second novel — his first, The Town That Laughed followed a collection titled Savitri’s Special Room and Other Stories, both set in this same fictional town untouched by any markers of time.

Bhattathiri has undoubtedly mastered his specific small-town-India aesthetic. Critics and blurbs have already repeatedly compared his work with RK Narayan’s books set in the latter’s Malgudi. For a current audience though, Karuthupuzha, especially as in Bhattathiri’s latest novel, is probably a zestier place to visit.

Bhattathiri does after all have a cheekier pen. He calls out everything — from righteous religious leaders and elderly ladies who spread rumours for want of anything more engaging to do, to pontificating old men who are quick to change tack with their opinions and observations.

But quaint atmospherics, eccentric people, and vivid vignettes can only go so far. It isn’t until the book’s halfway mark that a direction towards a plot emerges.
The plot is buried and deferred in favour of descriptions of numerous smaller characters and pages of possibilities that didn’t come to anything. All done deliciously, no doubt, and making for independently enjoyable bits. But this treatment, if deliberate, borders on caricaturing rather than celebrating and exploring the possible depth of characters that Bhattathiri has so lovingly journeyed with through this book.

This also does disservice to Bhattathiri’s lovely, light-hearted flair of analysing human behaviour (“These elders even blessed the two lovers unasked, feeling light-headed in their own bigness.”) and his mastery in describing minutiae (“…three boxers—one of which had lost its elastic, so its opening looked like the mouth of a person who had died laughing.”). Given this, Karuthupuzha could be a fertile ground for funny yet searing social commentary, as well as an off-kilter refuge for years to come, should the author choose to tell more stories from this town.

Nanu is the one character through whose presence the story’s heart emerges; it is his introduction that reverses a waning interest; and more importantly, it is his nine-page monologue that establishes Bhattathiri as a writer willing to engage with not just the external manifestations of the human mind, but also its inner, bizarre world that we often silence with ‘reason’. And he does it effortlessly.

Sample this from Nanu: “No creator has ever come down and guaranteed that the sun will always rise. No papers have been signed, no seals stamped. Tomorrow, at the usual time, if the sun chooses not to rise, then that becomes our new reality. At first we will be surprised to the point of distraction, but soon we will adapt.”

It may be an imperfect analogy, but while The Oracle of Karuthupuzha is an escape from reality, it shines in such bits, reminding us of fiction’s actual success — to be a bridge and balm on our way back to real life.

What is ‘negging’? The worrying dating trend and its impact on Love Island

Eight unusual ice cream flavours from around the world