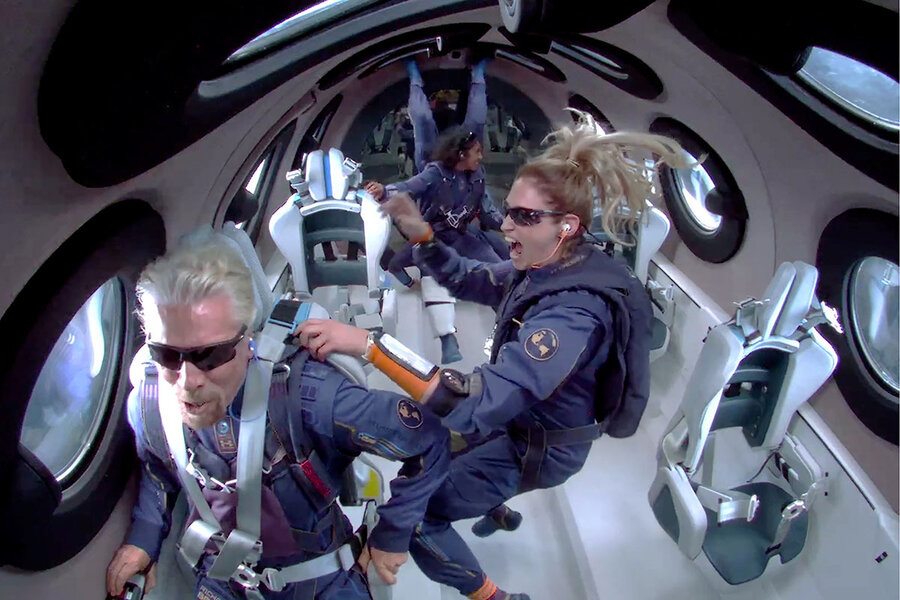 The closing line from “Back to the Future” fits the moment as human spaceflight expands with a pair of billionaires blasting beyond Earth’s atmosphere – Richard Branson on July 11 and Jeff Bezos scheduled for tomorrow. But behind the high-profile commercial launches, a question looms: Are more rules of the road needed, metaphorically, for a trackless domain that is seeing a rapid increase in activity?

The excitement this month is palpable as doors open for more people to experience space travel. Amazon founder Mr. Bezos is set to launch on the Blue Origin rocket tomorrow morning with his brother as well as the oldest and youngest people ever to enter space.

As billionaires boldly go spaceward, it signals an era of increased activity beyond Earth’s atmosphere. Along with guiding principles, does space also need more enforceable rules?

Yet with widening opportunities come ethical and practical concerns. How do you stay safe as human traffic increases along with more satellites, scientific experimentation, debris, and potential military activity?

In May, the uncontrolled reentry of a Chinese rocket caught the world’s attention about the challenges posed by space junk, including litter that remains in permanent orbit and can put spacecraft at risk. And in September 2019 a near collision between a SpaceX satellite and European Space Agency satellite in low-earth orbit showed the lack of international guidelines on how to handle collision avoidance, according to a report by the research organization Rand.

“There are very clear indications that space law, writ large, or space governance, if you want to use that term, is underdeveloped,” says retired Brig. Gen. Bruce McClintock of the U.S. Air Force, who leads Rand’s space enterprise initiative and is an author of the recent report.

From principles toward more rules?

Although principles for space have been discussed internationally for years – including an Outer Space Treaty dating back to 1967 that 110 nations have signed – existing protocols are often vague or growing outdated in an era of expanding space activity. The Rand report notes the risk of a “tragedy of the commons,” a term used when parties fail to care for a place because lines of responsibility aren’t clear.

Article VI of the 1967 Outer Space Treaty requires countries to “bear international responsibility for national activities in outer space” whether they be government-run or commercially operated.

Frans von der Dunk, a professor of space law at the University of Nebraska-Lincoln, says the treaty dates back to when only nations explored space, primarily the U.S. and Soviet Union.

“The idea of commercial space flight, which is of course what Bezos is all about, was nowhere on the horizon [and] has not been dealt with in any detail,” says Dr. von der Dunk, speaking from the Netherlands, where he operates a space law consultancy company.

And while the U.S. adopted the Artemis Accords last October, with space principles such as peaceful exploration and transparency, the 18-page document is not legally binding.

When Mr. Bezos, who stepped down as Amazon’s CEO this month, boards his vehicle on Tuesday morning in West Texas for his suborbital flight, the United States will be held responsible for the activity under international law. His company, Blue Origin, is now one of many in the domain, including Mr. Branson’s Virgin Galactic and Elon Musk’s SpaceX, which launched astronauts for NASA earlier this year and operates hundreds of satellites.

“What they are doing is definitely hazardous,” says Scott Pace, who served as executive secretary for the National Space Council, a White House organization overseeing space activity that was reestablished in 2017 during the Trump administration.

It is up to would-be space tourists to realize that. “We have a very light regulatory regime where the major focus is making sure you don’t hurt anybody else outside the launch,” says Dr. Pace, now the director of the Space Policy Institute at George Washington University. For now he sees the need for “only modest evolution” in domestic law to account for increasing space tourism.

At a congressional hearing earlier this year about rules in space, Democratic Rep. Jim Cooper of Tennessee cited space traffic management, banning debris, and the size of safety zones as areas that potentially call for new international agreement.

He bridled at the testimony of State Department experts who, in his view, were “settling for suggestions-based space” instead of “a law-abiding rules-based space.”

“Perhaps that is the best we can do, but I think we should try harder for better,” said Representative Cooper, who chairs the House Armed Services Subcommittee, which oversees the space activity of the Department of Defense and the nascent Space Force. “There must be a consensus somewhere on Earth for the sensible.”

Republican Rep. Michael McCaul of Texas says the Chinese Communist Party is defining space as another warfighting domain. “If left unchecked, the CCP will continue to use its influence in international organizations and over other countries to achieve dominance without regard to the security and sustainability of outer space,” says Mr. McCaul, in an email to the Monitor.

And while right now the tourism attention is on U.S.-based billionaires like Mr. Bezos, Dr. Pace says China has billionaires too. It is unlikely the commercial space market will remain so U.S.-dominated in the future.

He notes that the U.S. and China seem to “have a lot of common ground in things like space resources and coordinating with each other.” For those in the space business, he says it’s possible to see a cooperative arrangement.

Notably, however, while just last month Brazil became the 12th country to join the Artemis Accords, China and Russia are not signatories. Those two nations teamed up earlier this year to announce plans to jointly construct a lunar space station.

“How we operate in space does reflect our values,” says Dr. Pace, the executive secretary for the National Space Council when the Artemis Accords were adopted. And those operations have shifted.

The Artemis program, a NASA-led international effort to send the first woman and next man to the surface of the Moon in 2024, is a change of strategy from the Apollo program of the 20th century, Dr. Pace says.

“Leadership today is very different,” he says, “In the ’60s, it was all about what we can do by ourselves. Today, it’s who can we get to come with us.”