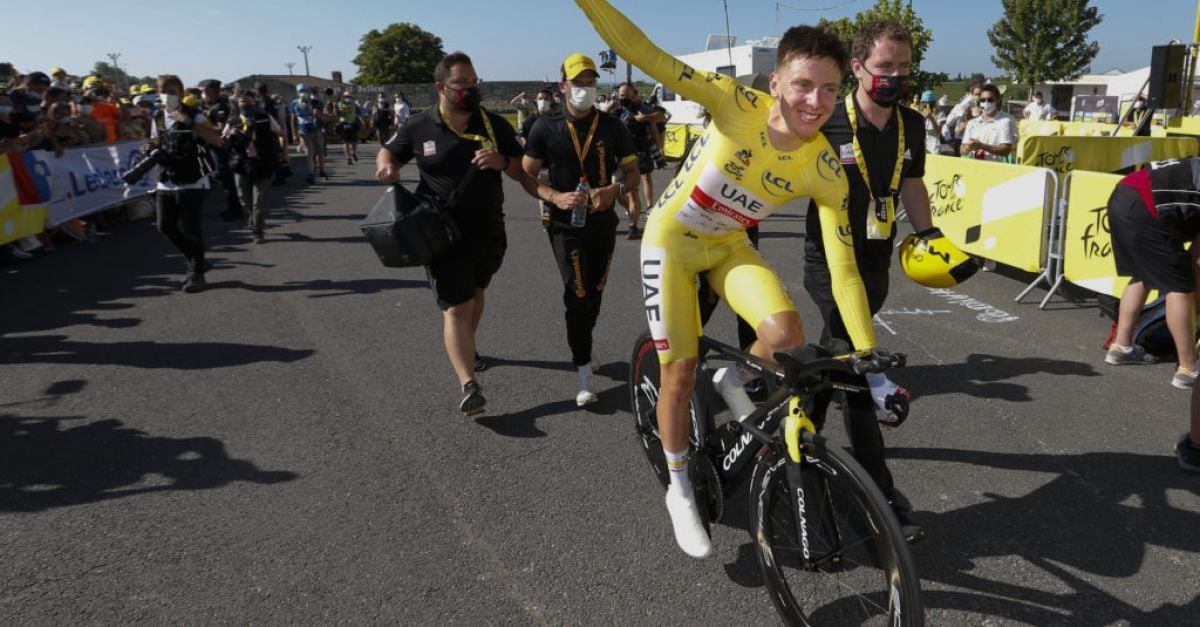 The 22-year-old Slovenian, who won the Tour on his debut last year, hammered his rivals in the Alps with a long-range attack on stage eight, reminiscent of the event in the 1980s, and stayed in control for the rest of the race.

He beat Denmark’s Jonas Vingegaard by a massive five minutes 20 seconds as Ecuador’s Richard Carapaz took third place, 7:03 off the pace as his Ineos Grenadiers team failed to spark once again after last year’s failure.

Pogacar finished Sunday’s 21st and final stage safe in the bunch as Belgian Wout van Aert prevailed in the sprint to beat compatriot Jasper Philipsen and Briton Mark Cavendish who were second and third, respectively.

Pogacar watched from the inside of the bunch, raising his arms as he crossed the line.

“I see him as the new Cannibal,” said five-time Tour champion Eddy Merckx, who earned that nickname due to his insatiable appetite for victory and won his first Tour in 1969 at the age of 23.

“He is extremely strong. I see him winning several editions of the Tour in the years to come. If nothing happens to him, he can certainly win the Tour de France more than five times.”

While Pogacar says he doesn’t like comparisons, the UAE Emirates rider threw caution to the wind when he attacked in the Col de Romme on the eighth stage, in a move similar to those of Merckx or fellow five-time Tour winner Bernard Hinault.

Pogacar won two mountain stages in the Pyrenees and an individual time trial – a testament to his all-round qualities – with his only sign of weakness coming in week two on Mont Ventoux.

The green jersey went to Cavendish after the Briton took his tally of career stage wins to a record-equalling 34, with four victories in this year’s race although he was denied the 35th by Van Aert on Sunday.

It marked a spectacular comeback for the Manxman, who was returning to the Tour for the first time since 2018 after years of poor results and mental health problems.

Cavendish was perfectly set up in the sprints by his Deceuninck-Quick Step teammates as the Belgian outfit claimed five wins in this year’s edition.

After losing the first mass sprint of the race, Cavendish was untouchable, avoiding the multiple crashes that marred this year’s Tour and sent his potential main rival, Caleb Ewan, home after the third stage.

Those crashes also ended the hopes of last year’s runner-up Primoz Roglic, who abandoned before the eighth stage, while the chances of Ineos Greanadiers’ co-leaders Geraint Thomas and Tao Geoghegan Hart were also ruined when they hit the deck early in the race.

The last days were marked by a potential doping scandal as a French prosecutor in Marseille opened an investigation into the Bahrain Victorious team after the outfit’s accommodation and vehicles were searched by police on Wednesday.

Bahrain Victorious said they were cooperating with the investigation.

They won three stages this year with Belgian Dylan Teuns’ solo raid in the mountains, while Slovenian Matej Mohoric took two victories from the breakaway. – Reuters