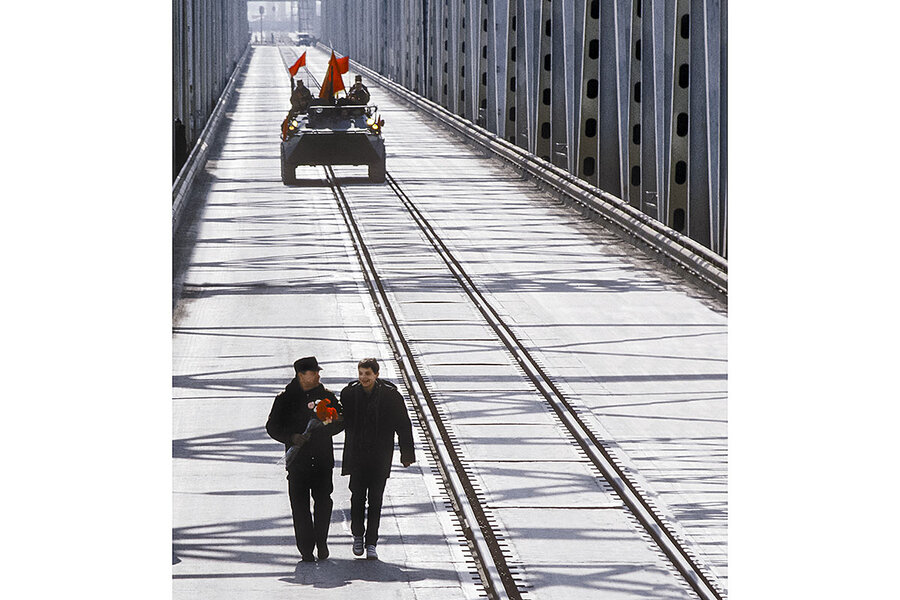 An iconic set of images from 32 years ago has been appearing anew in the Russian media of late. The images depict the commander of the Soviet Union’s “limited contingent” of forces in Afghanistan, Gen. Boris Gromov, striding across the ironically named Friendship Bridge between Uzbekistan and Afghanistan in early 1989, as the last of his forces rumbled out of the country after nine years of futile attempts to impose pro-Soviet order.

The United States’ swift pullout from Afghanistan that’s happening now is a déjà vu moment for a lot of Russians. However, this time it’s not their own troops pulling out in defeat, but those of the adversarial alliance NATO, which after almost 20 years, can’t claim any better military success than the Soviets achieved.

Not surprisingly, there’s a bit of schadenfreude on display in Russian media commentary. But overshadowing that are feelings of uncertainty, even dread. The Soviet withdrawal from Afghanistan is a painful memory that weighs heavily upon all current decision-making, mainly because the chaos that followed ushered in at least a decade of catastrophe, beginning with the collapse of the USSR itself – at least partly brought on by the stresses of the Afghan war.

Afghanistan was the Soviet Union’s Vietnam War, and its effects on the Russian psyche still linger. So the U.S. withdrawal from Afghanistan brings more than just strategic concerns to the Kremlin.

It also led to a five-year civil war in Russian-allied Tajikistan, with anti-government fighters taking refuge in tumultuous next-door Afghanistan, and incursions by Afghan-based Islamist militants into next-door Uzbekistan. A badly weakened Russia itself faced Islamist rebellions in its mainly Muslim North Caucasus region, which spread deadly terrorist acts into Russia’s heartland for many years.

“Russia’s experience in Afghanistan in the ’80s and its aftermath were traumatic,” says Vladimir Sotnikov, an expert with the official Institute of Oriental Studies in Moscow. “That trauma still remains, ingrained in the emotions of Russian officials and average people alike.

“Now, as we watch what looks like a hasty and chaotic American departure from Afghanistan, it raises a lot of fears and apprehensions,” he adds. “It also strictly limits what Russia will be able to do as the situation unfolds. Because of the past experience, there is no possibility whatsoever that Moscow will introduce even the smallest military force into Afghanistan.”

The speed of the U.S. withdrawal and the rapid Taliban advances that have followed have heightened this sense in Moscow that history may be about to repeat itself.

“The uncertainty of the development of the military-political situation in this country and around it has increased,” Russian Foreign Minister Sergey Lavrov said last week. “Unfortunately, in recent days we have witnessed a rapid degradation of the situation in Afghanistan. … It is obvious that in the current conditions there are real risks of an overflow of instability to neighboring states.”

More than 1,000 Afghan government troops recently sought refuge in Russian-allied Tajikistan, as Taliban forces rapidly occupy border crossings to that republic and the other two adjacent post-Soviet states, Uzbekistan and Turkmenistan. All three countries have ordered military mobilization, with Tajikistan calling up 20,000 reservists and moving the Russian 201st army division, which has been based in the republic for decades, to take up border positions. Moscow has pledged full support for its regional allies in the Collective Security Treaty Organization, which include Tajikistan, Kazakhstan, and Kyrgyzstan (but not Uzbekistan and Turkmenistan).

“The threat to Tajikistan is real, not just the danger of attack, but the refugees coming into the country that might include all kinds of people, such as spies, Taliban emissaries, and who knows what else?” says Viktor Baranets, a former military spokesman who’s now a columnist with the daily Komsomolskaya Pravda. “Russia is worried that this infection might spread to other republics, leading to bloodshed, perhaps even civil war, and calls for Russian intervention. … Russia is facing a lot of its own internal problems, so Putin has told Tajikistan to strengthen its own army, double frontier guards, try to protect itself.”

But many Russian security experts argue that circumstances are very different from 30 years ago. Russia and its central Asian allies are much more stable, and the Taliban have changed a lot under the impact of 20 years of hard fighting against NATO. In early July, a Taliban delegation visited Moscow and reportedly gave Russia assurances that they would not seek to expand their conflict with the central government in Kabul beyond the country’s borders.

“The Taliban representatives were saying all the right words, that they will not have any expansionist goals even if they win in Afghanistan, and that they are willing to work with Russia and China to improve regional security,” says Andrey Kortunov, head of the Russian International Affairs Council, which is affiliated with the foreign ministry. “I am not sure that Moscow is buying this, but we have to hope that the Taliban has learned a lot and become more mature and pragmatic. What are our options?”

Even the legendary General Gromov, interviewed by Komsomolskaya Pravda this month, expressed doubts that a potentially victorious Taliban would pose a serious threat to the region.

“The Taliban are not such fools or adventurers to throw themselves on someone else’s machine guns,” he said. “They aren’t actually all that strong, and they have a hard job ahead to gain a foothold on power in Afghanistan. They don’t need to make enemies by attacking other countries.”

Still room for the U.S.?

One open question is whether Russia will acquiesce to the establishment of U.S. military bases in neighboring central Asian countries – after forcing them to close two bases in Kyrgyzstan and Uzbekistan a decade ago – so that American forces might maintain direct support for the Afghan government during the troubled times ahead.

It’s often forgotten that Russia strongly supported NATO’s occupation of Afghanistan 20 years ago, allowed the U.S. to use Russian airspace for its resupply chain, and frequently urged NATO not to leave Afghanistan until the job of stabilizing the country was finished. It was only amid the more general souring of relations between Moscow and Washington in recent years that Russia grew irritated with the ongoing U.S. presence, and controversial rumors of Kremlin opposition grew.

There seems little likelihood that Moscow will agree to new U.S. bases in a region where, together with China, it has been at some pains to cleanse out foreign military influences. But Russian news reports suggest that, during last month’s Geneva summit, President Vladimir Putin may have offered President Joe Biden the use of existing Russian bases in Tajikistan and Kyrgyzstan, at least to operate drones for monitoring the situation in Afghanistan.

“It is the feeling in Moscow that the U.S. is not able to, or even interested in, maintaining a presence in the region to guarantee any particular future direction in Afghanistan,” says Fyodor Lukyanov, editor of Russia in Global Affairs, a leading Moscow-based foreign policy journal. “The Americans are leaving, and it seems to us that they pretty much intend to forget about Afghanistan. The U.S. is signaling to everyone else in the region that it’s up to them from now on.”

Another critical issue for Moscow is the explosion of drug production that took place during NATO’s stewardship in Afghanistan.

“We hope that the Taliban, which never really favored the production and export of opium, will take some steps against it” if they come into a position of power, says Mr. Kortunov.

“Indeed, if there are some efforts at drug reduction, and Afghanistan ceases to be a base for terrorist operations against its neighbors, I think that Moscow could live quite comfortably with a future Taliban government in Kabul – although, like everyone else, we would prefer something more inclusive,” he says.