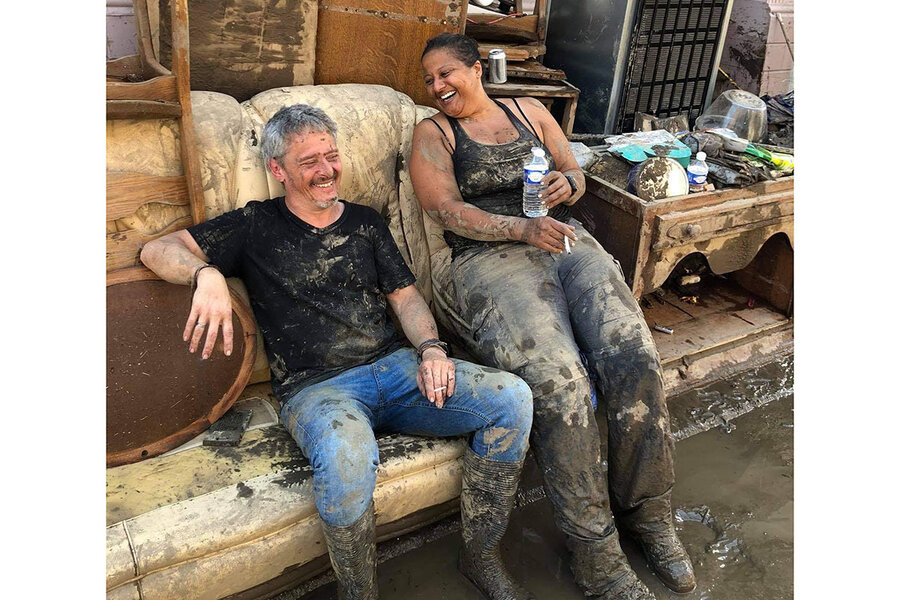 When Rita Werner was growing up in northwestern Germany, her mother always spoke of the floor tiles in the hallway. “She would say, ‘If they started getting wet and didn’t dry, then the groundwater is starting to rise and the storm is coming,’” says Ms. Werner.

Six years ago, the child social worker returned to her childhood home in Kommern, a town 30 miles from Cologne. Those floor tiles are now her responsibility. Ahead of last week’s news of a large storm brewing, Ms. Werner began toting books and valuables out of the basement and placing them on the top stair. Soon enough, the tiles started getting wet.

“Then the snails started climbing the walls” to escape water, she says.

While few were prepared for the flooding that devastated Germany, Belgium, and other neighboring countries last week, the aftermath has seen Europeans of all stripes helping to rescue and recover.

The flood that devastated regions in Germany and other parts of Europe was beyond anyone’s experience – or imagination. Ms. Werner, in the center of one of the hardest-hit areas in Germany, brought a pump down to the basement to remove water. But within a half-hour, “a huge brown soup flooded the street. That’s when the street turned into a river,” she says, pouring nearly 6 feet of water into her basement and demolishing the town bridge.

Flooding killed nearly 200 people in Germany and Belgium – with rescuers still looking for more casualties – and also devastated parts of the Netherlands, Switzerland, and Luxembourg. As people grieve and clean up, some wonder whether Europe is adequately equipped to cope in the face of extreme climate events. But the dominant feeling for many is heartfelt gratitude for the community spirit that emerged to usher survivors through a once-in-a-lifetime flood devastation.

“We are totally overwhelmed by the willingness to help that we have seen in the past couple of days,” says Patrick Pöhler, spokesperson for the Malteser, an international Roman Catholic relief organization that has fielded millions of euros in donations in the past few days. “We have been getting nonstop offers to donate and help in any way possible. People want to donate things, or manpower, or even money. We are so proud of our community for that.”

“I just get goose bumps when I think of how everyone is helping us – the togetherness is just amazing,” says Ms. Werner. “My neighbors both took the day off of work tomorrow … and will come help me clean out the mud from my basement. Through Twitter … just now [a stranger] from Offenbach sent me a message. He’s bringing me dehumidifiers tomorrow and machines to soak up the mud.”

“It’s the trust and togetherness”

Frank Schneising says residents of Ahr Valley sometimes view motorcycles negatively because of a few loud motorcyclists. This week, he and his United Biker colleagues were a welcome addition to the rescue effort because they went straight to where help was needed. “If you want to ride in this area in the future, then you need to come now and help out,” he messaged his fellow motorcyclists.

And they came. Mr. Schneising mobilized groups of 30 bikers each, who began rotating in shifts to help the community in Heimersheim near Stuttgart. The group drove in as far as it could, gathered wheelbarrows and shovels, and then began walking. “The streets don’t exist anymore; there’s no way to get through with a car,” says Mr. Schneising of hard-hit flood areas. “On the first day, the debris was piled so high – wood, old pieces of furniture, all over the place. Cars were piled on top of each other.”

First they checked houses for people, then began helping to clear debris and do whatever needed doing. The effort brought together strangers from all over Germany, working silently in tandem.

“People just came streaming into the town. Whenever there was something to do, there were people ready to do whatever without us even asking,” says Mr. Schneising. “No one said a word. We were standing in mud up to our chests at one point, and people were emotionally exhausted, but the unbelievable things we were seeing had such an effect on people.”

The pandemic gave Mary Sherrer, a Bavarian Red Cross volunteer, a head start on organizing volunteers via Facebook. “In the first lockdown there were no masks [available] so I started a Facebook group because I couldn’t sew,” says Ms. Sherrer, who works as a business administrator. “Within a few hours, 4,500 people from Würzburg joined. That’s stayed intact until today. It’s the trust and togetherness that makes this group so special.”

The group has offered people an online platform to seek help, and it’s also mobilized groups to travel to hard-hit areas in the western state of North Rhine-Westphalia.

Meanwhile, in Euskirchen, where the flood devastation is most intense, donations are pouring in. Corinna Lawlor, a Euskirchen employee working as a temporary spokesperson during the flood, says that “anything you can possibly imagine, it’s been donated. We have had semitrucks drive up here, filled with things to donate. But we don’t know where to store it anymore.”

“When you need them, they are there”

Similar scenes played out in Belgium, which was holding a national day of mourning on Tuesday for the 31 people killed in extreme weather. The initial outpouring of solidarity proved so intense that the Belgian Red Cross had to ask people to stop bringing in spare clothes and household goods so that volunteers wouldn’t be bogged down by sorting and could go help where needed.

In Liège, Belgium’s third-largest city, a woman won hearts over the weekend by organizing her neighbors to distribute nearly 1,000 pancakes because she couldn’t physically help to clear the debris. So did members of the North African community who brought out sweet treats for those engaged in the cleanup. The governor set up a special cell to help structure voluntary efforts and donations.

“Seeing all the destruction and all the work that people – who have nothing left – need to do, I could not just sit on the couch,” says Ysabelle Adolphe, whose house on higher ground was spared the devastation of neighborhoods by the river. She helped clean four houses in the span of three days, striking up new friendships with fellow helpers along the way. “In Belgium, everybody is like this; when you need them, they are there.”

Antoine Iseux, spokesman of the Belgian Crisis Center, hailed the “exceptional” mobilization of Belgians but was also grateful for the European Union, which activated its aid mechanism. France, Italy, and Austria made their presence felt by sending specialized teams and equipment to help rescue operations as streets flooded, cars floated, and people scrambled to higher ground.

“We hadn’t seen such flooding in Belgium in more than a hundred years,” he said. “The population was shocked by this rise in water and the damage that it could do. But what I take away is the gestures of solidarity. Our work [now] is to clear the debris, unblock the roads, and ensure the stability of buildings.”

It could take weeks, he noted, for the situation to return to normal.

Lessons to be learned?

With better weather this week came relief, but also shock at the extent of the devastation. The high death toll in Germany, a wealthy nation unaccustomed to natural disasters, raised tough questions about the European Union’s capacity to predict and confront increasingly extreme climate events – and adequately communicate the risks to its population. The timing of the disaster also struck a powerful chord; the problems began shortly after the bloc revamped its climate strategy.

Several German politicians were quick to blame “climate change” – a welcome but overdue recognition of the problem for activists. European Commission President Ursula von der Leyen said the intensity and length of the flood events offered a “clear indication of climate change and that this is something that really, really shows the urgency to act.” Critics considered their declarations an effort to dodge responsibility and adequately reflect on the lessons of Germany’s “Hurricane Katrina” moment.

The European Flood Awareness System issued an early warning of extreme flooding risk at the beginning of last week. But at the national level, SMS evacuation warnings and coordination efforts in some cases came too late. “The death toll could well have been significantly lower had all the affected areas used the intelligence provided by the early warnings to preventively evacuate all the high-risk areas,” says Khaled Diab, a spokesman for the umbrella organization European Environmental Bureau.

“One reason that this didn’t happen was that flooding on such a massive scale is largely uncharted territory for this part of the world,” he explains. “Another major factor was the labyrinthine nature of the disparate national and regional authorities involved. One hopes that lessons will be drawn from this, the most important being that the environment does not recognize nor respect political boundaries and borders.”

Dieter Gerten, professor of global change climatology and hydrology at Germany’s Potsdam Institute for Climate Impact Research, shared that view. Western Germany, along with the affected areas of Belgium and the Netherlands, he notes, were exposed to unprecedented levels of rainfall, often in vast areas with no history of flooding.

“While such extreme events (as well as heat waves and droughts) can be generally expected in the course of ongoing global warming, the magnitude of this one appears to have surprised many,” he says. “Solidarity among people in the region and the country was very high. Yet now we need to prepare institutions and civil society even better for possible further – and potentially larger – climatic extreme events in the future.”

Taking what one can

Back in Liège, Ilham Ait Omar wonders if her home, next to the Vesdre River, will ever be inhabitable again. The water, she says, started gushing into her home at 3:40 p.m. on Wednesday. She immediately rushed out with her son and daughter and helped evacuate a couple of neighbors. Those they couldn’t help had to wait for firefighters to come a full day later, which is when an SMS message arrived urging evacuation.

“What can the authorities do in the face of such situations?” asks Ms. Ait Omar. “I don’t want to blame them. Everyone did what they could. We couldn’t cope with our own policemen or firemen. It was beyond a crisis.”

As a mother, she worries about the toll that the experience will take on her children, so she returns home first thing in the morning and leaves late at night hoping to finish the cleanup. Although the nights are tough because the reality of all that has been lost sinks in, the overwhelming support she has received from her community – including Ms. Adolphe, who is her daughter’s rugby coach – and complete strangers helps carry her forward and brings joy to her days.

“I’ve had a tremendous amount of help. People have come from other parts of Belgium, even France,” she says. “We see people who are in even greater need than us so we don’t dwell on our problems, even if they are important.”