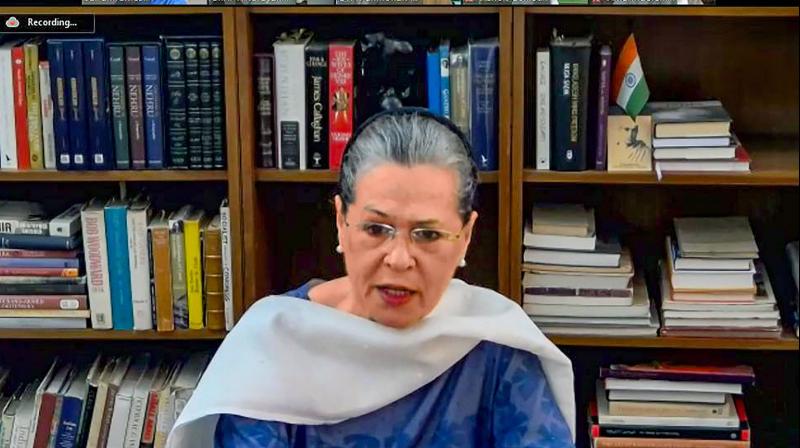 New Delhi: Ahead of the Monsoon Session of Parliament, Congress Parliamentary Party chairperson Sonia Gandhi reconstituted the party's parliamentary hierarchy in both houses, "to facilitate and ensure the effective functioning".

In a directive, the Congress interim chief informed that party leader Adhir Ranjan Chowdhury will be the leader of the party in Lok Sabha and Gaurav Gogoi will be his deputy. Congress also informed that K Suresh will be chief whip and Ravneet Singh Bittu and Manickam Tagore will be whips of the party in the lower house. Congress leaders Manish Tewari and Dr Shashi Tharoor will also be part of the group.

For Rajya Sabha, Mallikarjun Kharge will be the leader on the floor with Anand Sharma his deputy. Party appointed Jairam Ramesh as the Chief Whip in Upper House, along with Ambika Soni, P Chidambaram, Digvijaya Singh and KC Venugopal as the members of the group.

"As chairperson of the CPP, I have decided to reconstitute the following groups to facilitate and ensure the effective functioning of our party in both Houses of Parliament. These groups will meet daily during the session and can meet during the inter-session periods as well where Parliament issues are concerned," the directive stated.

"Joint meetings of these groups can be convened as and when needed. Mallikarjun Kharge, Leader Rajya Sabha shall be the convener of the joint meetings," she added.

The monsoon session of Parliament is scheduled to start on Monday. Ahead of that Opposition leaders are scheduled to meet on Sunday to chalk out a strategy to target the Central government over several issues including farmers agitation, privatisation and Supreme Court's comments on the validity of Sedition laws.