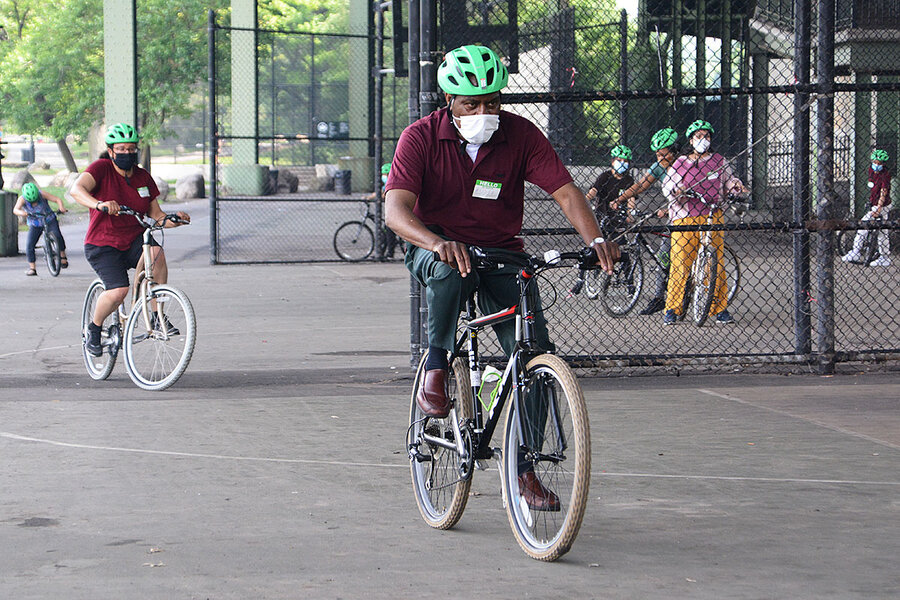 Sitting on a bench in Riverside Park, off 158th street in Harlem, the group of women anxiously check their phones and watches, waiting for 10 a.m.

They exchange knowing smiles and nods, because these women share a secret: They don’t know how to ride a bicycle.

“Growing up in Cameroon, every kid doesn’t have a bike,” says Pamela Kouakam, as she pulls a bright blue bike helmet over her long braids. “And if you never do biking as a kid, you’re terrified to try.”

Students in adult bike-riding classes say they’ve overcome fear and embarrassment – gaining a new way to get to work and to exercise, as well as make new friends.

Despite her fear, Ms. Kouakam, who lost her job as an accountant during the pandemic, decided it was time to learn.

“My 8-year-old daughter always says, ‘Mommy let’s go ride our bikes together,’ and I just felt so left out,” she says. “I want to do this with my daughter.”

Ms. Kouakam is one of a dozen women enrolled in Bike New York’s free, two-hour Bike Skills 101: Learn to Ride class for adults. The program started more than a decade ago, says Bike New York’s Education Director Richard Conroy, after adults started asking if they could enroll in classes for children. Now, with weekly classes across the city, Learn to Ride for adults is the organization’s largest program.

Since 2011, Bike New York says it has run more than 850 adult classes with more than 15,000 students. More than two-thirds of the students are women, Mr. Conroy estimates, and many are immigrants.

Reasons for wanting to learn differ. Some students say they’d like to commute to work on a bike because it’s cheaper and better for the environment. Some are looking for a new way to exercise. Many, like Ms. Kouakam, say they want to learn so they can ride bikes with family and friends.

Almost everyone in the class says they simply want to learn how to do something they’ve never done before.

“I feel embarrassed when I see people riding a bike and I can’t,” says Audye Voltaire, the class’s only male student who moved to New York from Haiti five years ago. “I’m scared because I know I may fall down, but it’s worth it. I want to have the fun of riding a bike.”

In recent years, biking has become increasingly popular in the Big Apple. A 2019 city government report found almost half a million cycling trips were made each day in the city in 2017, roughly five times the number in 1980. The number of New Yorkers commuting to work by bike increased 55% between 2012 and 2017, almost double the rate of other major U.S. cities.

Shortly after Mr. Conroy arrives by bike, the students grab bikes and helmets from Bike New York’s storage container and stand in a circle. Some hold their bikes hesitantly; one woman puts her helmet on backward.

“How many of you are scared of falling?” Mr. Conroy asks the class.

“And how many of you are embarrassed about being an adult who doesn’t know how to ride a bike?” he asks.

All hands shoot up.

Mr. Conroy begins by explaining the correct way to put on a helmet and pointing out the various parts of a bike. He then lowers all of the bike seats and takes off all of the pedals. The students begin their lesson by straddling the bike and pushing forward with both feet, moving counterclockwise around a basketball court.

As the students gain confidence, Mr. Conroy gives them back their pedals, raises their seats, and shows them how to push off and brake. One woman sways back and forth and looks as if she is about to fall before recovering and successfully riding forward several feet. The class erupts in cheers.

By the end of the class, almost everyone is biking full loops around the court on their own.

“At first I was like, ‘No way I will learn how to ride a bike in one day,’” says Iris Polanco, who says her parents didn’t allow her to ride a bike when she moved to the United States from the Dominican Republic as a young child, fearing for her safety. “Now I’m going to sign up for the next class.”

Follow-up classes focus on things like how to work gear shifts and how to ride safely on city streets in traffic.

“The camaraderie of this is amazing,” says Ms. Polanco, an arm around Ms. Kouakam’s waist. The two women met at an earlier bike class and have made plans to meet up. Maybe even for a bike ride.