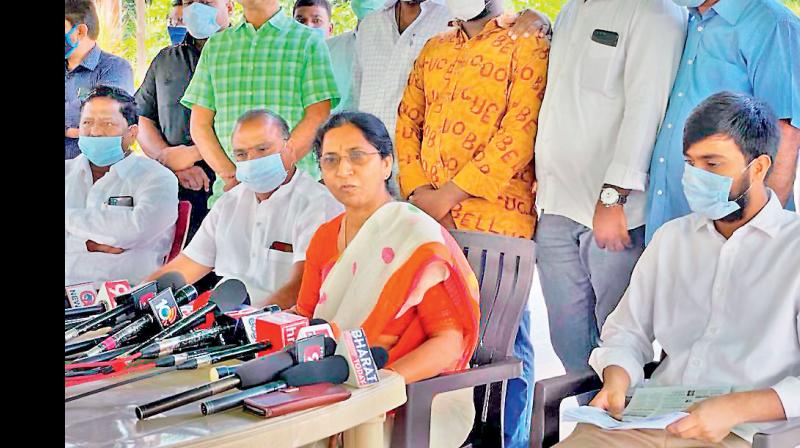 KARIMNAGAR: Etala Jamuna, wife of Etala Rajendar, on Sunday announced that she is also in the Huzurabad by-election fray.

She gave the indication while participating in election campaigns in various divisions of Huzurabad. This is even as TRS and Congress parties are still searching for their respective suitable candidates.

It is learnt that being fully acquainted with the moves and political strategies of Chief Minister K. Chandrashekar Rao, Rajendar is readying counter-strategies to take on the TRS party. One of them is fielding Jamuna as a BJP candidate in the by-election. It may be noted that right from the day he resigned from the Legislative Assembly, Rajendar and Jamuna have been touring various villages separately and both are actively participating in the election campaign.

Speaking to media persons in Huzurabad, Jamuna said that although it is undecided as to who would be in the race, she reminded that she was the person who backed Rajendar and encouraged him to participate in the separate Telangana movement.

“In every election that he contested, I led the election campaign from the front and played a key role in his victory,” she pointed out.

Jamuna clarified that irrespective of whether it was she or her husband who will contest eventually it will be a BJP victory.

Meanwhile, in a later development, on coming to know that her remarks had gone viral, Jamuna confirmed that it was Rajendar who will be in the fray.