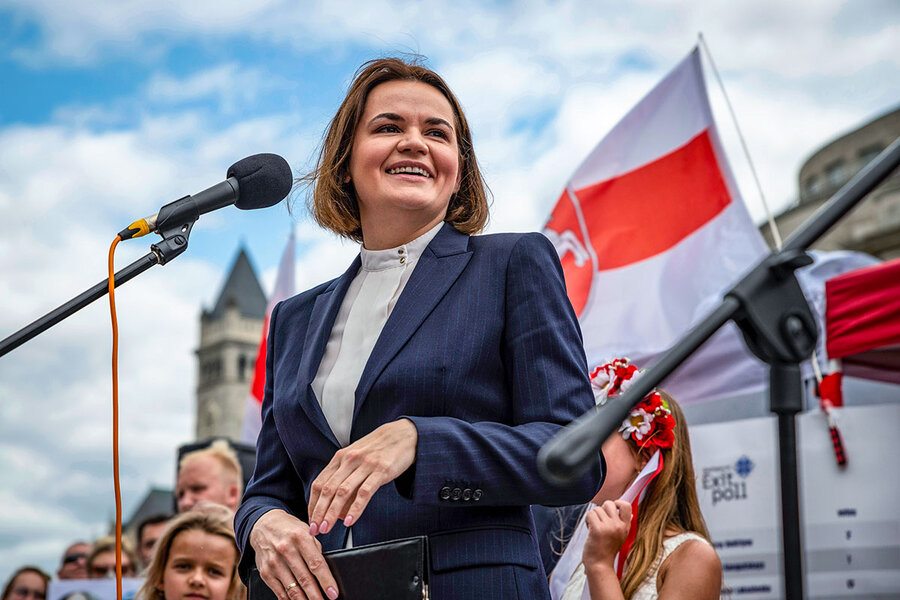 Until last year, Sviatlana Tsikhanouskaya was a stay-at-home mom with two young children, one with a disability. But that all changed when her husband, a leading opposition presidential candidate, was thrown into prison.

Within weeks, she became the face of Belarus’ pro-democracy movement, picking up his fight to take down what’s been called “Europe’s last dictatorship.”

It may appear to be a quixotic effort, leading some to dub her the “Joan of Arc” of Belarus. But Ms. Tsikhanouskaya, 38 years old and living with her children in exile in Lithuania, remains undaunted. After all, the former English teacher has accomplished more than she probably dreamed in May 2020, when her husband, Sergei Tsikhanousky – a video blogger and vocal critic of Belarusian strongman Alexander Lukashenko – was arrested, along with other opposition candidates.

What happens when your spouse’s imprisonment thrusts you into the political spotlight – with expectations you will carry on the fight? In an interview, this young mother shares how she found the strength to challenge a dictator and knock on the doors of the powerful in Washington.

Who is this young woman, who has spent this past week in Washington meeting with top Biden administration officials, members of Congress, European diplomats, and members of the Belarusian diaspora? And how did she muster the resilience to carry the mantle of resistance for a country of 9.5 million people?

In a Monitor interview Wednesday at the Willard Hotel, near the White House, Ms. Tsikhanouskaya spoke of how she learned to stop calling herself a “weak woman,” her time in Ireland as a “Chernobyl child,” her views on democracy, and her plans for the future.

For one, she says, her plan was never to serve more than a short time as president – and still isn’t, if somehow the Lukashenko regime were to collapse. She describes herself as a transitional figure, who, had she been declared winner last August, would have freed the nation’s political prisoners and immediately held new elections.

Perhaps that explains her answer to this question: Who are your role models for women in leadership?

“I would like to name strong women, like Margaret Thatcher,” Ms. Tsikhanouskaya says. “But I think that my role model is Princess Diana. She was firm, but her biggest value was people.”

“It was so important for her to communicate with ordinary people, to show kindness. My heart is crying about every person who is behind bars. It’s very difficult to work, you know, keeping this feeling inside. But I can’t do otherwise.”

Ms. Tsikhanouskaya’s compassion came through Sunday at a pro-democracy rally of Belarusian Americans on Freedom Plaza in Washington. She posed for photos with children, including a little girl in a wheelchair.

Yet she also exhibits a steely determination, which has taken her to the capitals of Europe, and now to Washington, to push for tougher economic sanctions on the Belarusian regime. She met this week with Secretary of State Antony Blinken and National Security Adviser Jake Sullivan, and participated in the launch of the bipartisan Congressional Friends of Belarus Caucus. But she was not granted a meeting with President Joe Biden.

When asked about that, she looks disappointed, but is reserved. “I have to answer diplomatically,” she says. “He is a busy person.”

After your week in Washington, you’re heading to New York and California. Who is caring for your children (an 11-year-old boy, who was born with hearing loss, and a 5-year-old girl) while you are traveling?

I have a friend who came to take care of them [in Lithuania] while I’m absent. My parents are in Belarus.

Is it true that you were told to choose between your children and prison?

It happened twice, first during the election campaign. I had a phone call, and the person told me that if you don’t stop doing this, you will be imprisoned, your children will be put in an orphanage. That moment was very stressful, and I hesitated.

But I couldn’t betray the people who believed in me and who believed in my husband and who believed in changes in our country, and I decided to send my children to Lithuania and continue my campaign. But after the election, the next day I went to the Election Commission to give the document [stating that] that we do not agree with the fraudulent elections, and there, high-ranked people, military people, gave me a choice: “You’re going to Lithuania to your children or you will be in prison for years and your children will be raised without you.” At that moment, my inner mother played, and I chose to join my children.

What in your life has prepared you for this sudden, public role?

I always considered myself a so-called weak woman, because I had a husband who took care of the whole family. I had to rehabilitate my child [help him deal with his near-deafness, including surgery], and my husband was doing everything, earning money to care for us. All those years, I looked at my husband as a strong person. He always was very purposeful.

He was my teacher at that moment. Maybe women are initially very strong, but not usually put in circumstances when we can show our strength. And when I found myself facing those difficulties, this inner strength appeared.

You met with former Lithuanian President Dalia Grybauskaitė, the first woman to hold that job. What was her advice?

She told me that you shouldn’t show your weakness. Even if everything is crying inside of you, stay firm.

Of course I accepted her advice. I have had a very short political career, but I have had the best teachers ever. Presidents, prime ministers, I’m studying them during my visits, including German Chancellor Angela Merkel.

What about your childhood? You spent some summers in rural Ireland in a program to help children from areas affected by the 1986 Chernobyl nuclear accident.

I grew up in a family that wasn’t interested in politics, because we were sure that nothing can be changed. We didn’t have an opportunity to communicate with other people, but I did visit Ireland a few times as a “Chernobyl child.” The dad influenced me a lot, and I had a chance to see that there are countries that live much better, where people are happy, where people are so free, and they have the right to say what they want.

Our parents lived in the Soviet Union under that regime. Many in the older generation have never been abroad. But the new generation has had a chance to travel. The internet influenced a lot – we could see how other people live, and step by step, this desire to change our life for the better grew.

How is your husband doing?

Today I communicated with [his lawyer]. She came out of the trial and said that he’s so strong, that he’s defending his rights, that he will never betray his values. She’s banned from talking about the trial itself.

For the last 10 months, I suppose he is in solitary confinement. Oh my God, it’s very difficult.

Women were central to last year’s campaign, first with your candidacy and the two other female candidates who united behind you, then in the protests led by “women in white” after the disputed result. Was that significant?

It was very symbolic. And after the election, maybe women were inspired by our trio. When Lukashenko’s cronies detained so many men, and they were brutally beaten, our women felt this strength, and felt that now it’s our turn to go out to the streets. They became an inspiration for the rest of the country.

How do you keep in touch with the people of Belarus from exile?

God bless the internet. We have, every day, Zoom conferences with doctors, workers, students, people of culture, sportsmen, pensioners. We are first of all inspiring each other. We get information from inside, what people are doing there. People on the ground ask for our help, or tell us what to do, what they want.

Are you concerned for your safety, considering Russia’s poisoning of dissidents and especially after Belarus hijacked a Ryanair jet in May carrying young activist journalist Raman Pratasevich?

The Lithuanian government provides me security. Of course I worry about my team, and all those activists who are in exile. If I thought only about my security, I wouldn’t do anything. But even if something happens to me, this movement will not stop and the regime understands this. They thought they could kidnap Raman Pratasevich and people would say he betrayed us, but we understand that he’s a hostage.

How do you define “democracy”?

Why don’t you want to be president, after gaining all this experience?

Lukashenko and his regime are destroying the economy, and the new president will have to be a good manager with the right skills, with the education to understand all those processes. We have in Belarus many outstanding people who can do this.

I have studied a lot, and I have good contacts all over the world now, and I could be useful for the country. Absolutely, I’m ready to be in politics, maybe in the human rights area. It’s not necessary to be president to be useful for your country.

Russia worries: Will US exit from Afghanistan bring back bad old days?