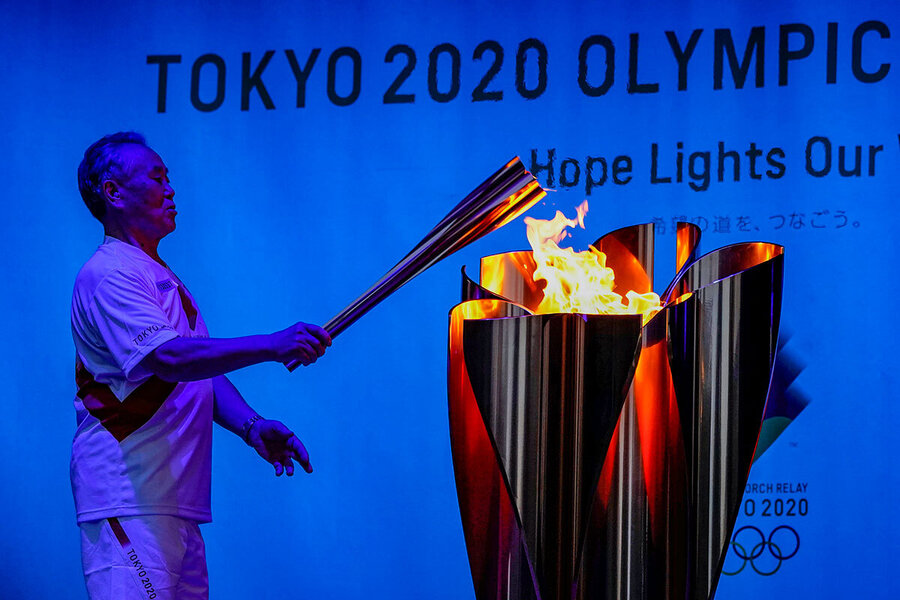 After a four-month relay across Japan, the Olympic torch is finally burning in Tokyo. But it hasn’t arrived as planned.

Efforts to ​combat the coronavirus pandemic have detoured the relay off public roads and replaced it with a series of discreet flame-lighting rituals. ​Nearly half of ​some​ 4​7 ​relay​ legs across the country​ were disrupted.​

For this symbol of endurance, and the Games it heralds, the journey resembles the destination.

Against a pandemic backdrop, the Summer Olympics in Tokyo are accompanied by no shortage of challenges. Yet the narrative of Tokyo isn’t predetermined – and the promise of internationalism and athleticism remain.

More than a year after its postponement, the delayed 2020 Olympics beg​an Friday with a closed-door spectacle​. Tokyo ​is​ again in a state of emergency​, and spectators​ have been banned.

All this highlights the central paradox of the Tokyo Games. The world has spent the last year and a half fighting COVID-19, reinforcing a sense of global unity – and the value of global celebrations. Yet​ public health protocols mean the Tokyo Games will be the most restricted on record. At once, these Games may feel like the most and least international of the modern era.

What was meant as a symbol of recovery – first from the Fukushima disaster in 2011, and later the pandemic – has instead become a reminder of how much recovery lies ahead. But as has always been the case​, the Olympics are a competition of narratives as much as they are a competition of athletes. Each Summer Games tells a story, and the story of the Tokyo Games may change by its end. ​This unprecedented Olympics ​may become a symbol of resilience for the international community.

“There’s a lot of voices out there that think the Olympics should not be going on,” says Patrick Cottrell, professor of political science and an expert on the International Olympic Committee (IOC) at Linfield University in McMinnville, Oregon. “But on the other hand … the degree of internationalism [at the Olympics] is the world’s kind of truly universal event.”

One for the books

Past Olympics have only been canceled in wartime. Since 1948, each Summer Games has taken place on its quadrennial schedule – despite boycotts, scandals, and terrorist attacks.

In normal years the Games are akin to a global house party, mixing cultures from around the world through a common love of sport, says David Rowe, professor emeritus at Western Sydney University’s Institute for Culture and Society. That’s symbolized not only by the athletes but also by the attentive crowds, filled with fans, friends, and families from all nationalities.

This year that sense of internationalism must either adapt or risk fading.

Athletes must socially distance and depart Japan within 48 hours of elimination or their competition’s end. Hugging, high-fiving, handshakes, and sharing meals together are discouraged. The sometimes bacchanalian Olympic Village will function like a quarantine zone. To limit contact, winning athletes will put on their own medals.

To many like Professor Rowe, who signed a petition to cancel the Games, these restrictions prevent the very interactions that make the Olympics worthwhile.

“In its own terms the international dialogue, coming together, festival of humanity that the Olympics should be just cannot happen under these conditions,” he says.

Polling data consistently show a majority of the Japanese public prefers canceling the Games, though support is rising. Without billions of dollars at stake and pressure from the IOC, which can sue cities that don’t follow through on an Olympic contract, the Olympics very well might have been abandoned. Instead, they have begun.

For all of the public misgivings, the people of the host country are gamely and graciously helping hordes of visiting athletes and those of us descending as reporters as we navigate – sometimes easily, sometimes not so easily – around the official venues.

The lead-up to every Olympics is an anxious period. Organizers fret, as athletes, media, and other volunteers descend upon the host city. With so much at stake, all molehills feel like mountains.

In a moment where so many people are craving an oasis from the pandemic, says Professor Cottrell, the Olympics present a unique opportunity – beyond even that of this summer’s euphoric and similarly postponed Euro Cup.

More than almost any other Olympics in the modern era, he says, these Games have a fluid narrative. The story of the Tokyo Games has changed before and will almost certainly change again.

Geopolitics and public health risks, after all, will be less top of mind when Simone Biles attempts a Yurchenko double pike vault, Katie Ledecky carves through a churning pool, or Kevin Durant composes poetry with a basketball.

By now, it’s clear the Games will not showcase a post-pandemic world. But despite looking different than expected, they still resemble the time in which they occur – like every other Olympics. A world largely still in lockdown will compete at a locked-down Olympics.

“The presentation of it this time around will be of an eerie atmosphere, what I’ve been calling … the cocooned Olympics,” says Alan Tomlinson, a professor of sport and leisure studies at the University of Brighton.

But not all the challenges facing the Tokyo Games can be blamed on the pandemic. Fragile public trust in the integrity of Olympic officials and fraying economics for host cities have long affected the Games.

“We’re at this moment where the Olympics is in question probably as never before,” says Professor Rowe.

Amid declining interest in hosting the Games, says Professor Tomlinson, the bizarre Tokyo Games will test the value of the Olympic platform, and its ability to adapt to the world around it. Predicting that the Games will set viewership records, he expects people around the world to watch for a story.

“I don’t think it’ll lose a global audience,” he says.