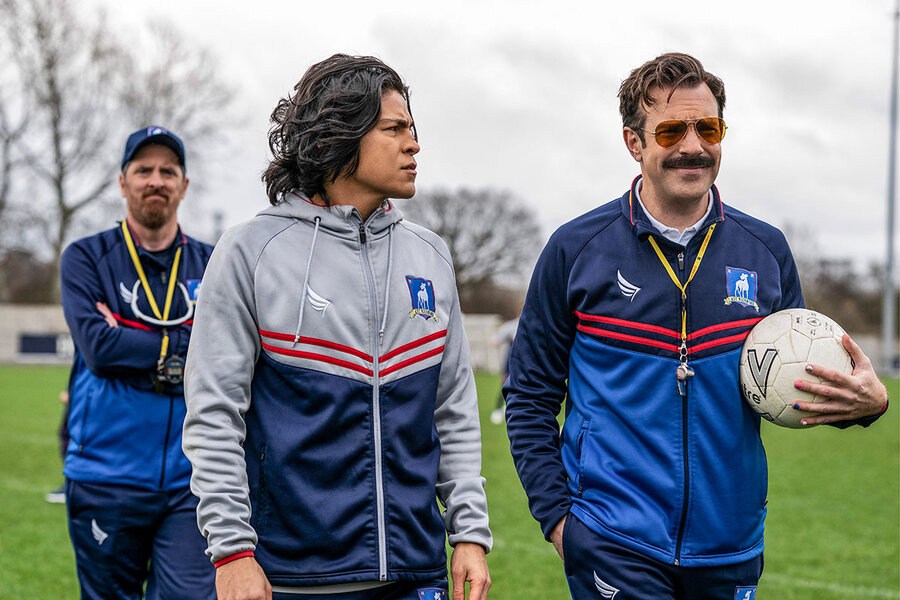 Some culture watchers observe that what makes “Ted Lasso” different from many fish-out-of-water stories is that the new setting doesn’t change the protagonist. Rather, he changes it. His ethos, embodied by the show’s tagline “kindness makes a comeback,” expresses a hopeful vision of how grace can heal divisions. Fans and TV critics say the show succeeds at portraying buoyant actions and themes without making them seem out of touch.

“It has a tone that is very rare on American television, or British television, for that matter, in that it is positive and hopeful without seeming saccharine or unrealistic,” says Ed Lee, an assistant professor at Emerson College who teaches screenwriting and comedic arts, in an email. “Many shows would take a character like that through the story machinations of a cynical world in order to either prove that people are cynical, or prove that the world is too cynical for a man like Ted Lasso.”

Thanks to his folksy geniality and handlebar mustache, Lasso (Jason Sudeikis) initially comes across like Ned Flanders from “The Simpsons” – but less cloying. The new coaching position challenges his sensibilities. For instance, when Lasso spots a racy pin-up poster in an athlete’s locker, he’s quick to cover it up. (It’s an adult show with situational humor that is occasionally, as the British would say, “bawdy.”) On the field, his egotistic athletes commit fouls and spew foul language. Off it, they bully the meek locker room attendant. The club’s dysfunction goes all the way up to the top. Unbeknownst to Lasso, the soccer club’s new owner is secretly trying to sabotage him.

But the antagonists underestimate the coach’s savviness and proactive approach to his situation.

When Lasso’s not spouting homespun sayings reminiscent of “Deep Thoughts With Jack Handey” from “Saturday Night Live” (where Mr. Sudeikis was a cast member), he’s quoting Walt Whitman: “Be curious, not judgmental.” Instead of being resigned to the destructive behavior of those around him, the coach digs beneath the surface to try to understand why they’re acting that way.

“This is a show where people start out as mustache-twirling villains, but ultimately get redeemed, or at least get excused to some extent,” says Philip Scepanski, author of the recently published “Tragedy Plus Time: National Trauma and Television Comedy.” “It is a useful message in a world where the country feels very divided and there’s no common ground between these two sides.”

One of Lasso’s biggest challenges is to bridge the factions within the soccer squad. He encourages his athletes to become less selfish. That includes a more inclusive welcome of teammate Sam Obisanya (Toheeb Jimoh), a homesick Nigerian. The coach doesn’t define success by wins and losses. He’s more interested in encouraging his players to be the best version of themselves on and off the field. Lasso seems like a graduate of the “Friday Night Lights” school of coaching.

“We all want somebody who sees the best of us when we can’t,” says Matthew Gilbert, television critic for The Boston Globe, who observes that audiences appreciate that Ted Lasso isn’t yet another superhero story or antihero story. “He’s not just a soccer coach or a football coach. … He’s a life coach.”

Mr. Sudeikis has compared his character to Michael Landon in “Highway to Heaven” or Della Reese in “Touched by an Angel” because of the way Lasso leads by example. Late in the first season, he reveals a remarkable capacity for forgiveness. That’s not to say Lasso is perfect – he’s struggling with family troubles back home.

“In 2020, many of us missed our best selves or, more broadly, we missed people around us responding to terrible situations as their best selves would,” says bestselling novelist Allison Winn Scotch, a fan of the series, in an email. “When faced with loss (sometimes literal, sometimes metaphoric), the characters responded in a way that we would hope that our best selves would.”

The show’s message of taking moments to appreciate the good things in life deeply resonated with one of Ms. Winn Scotch’s friends, Amanda Rykoff, during the “dark time” of lockdown. It influenced the philosophy behind Ms. Rykoff’s recently launched baking business in Los Angeles.

“I could not only rely on Ted Lasso and that entire cast of characters to bring joy into my living room, but I could then bring joy to my customers and my friends through my baked goods,” says Ms. Rykoff, who sometimes replicates the shortbread biscuits that Lasso is famously fond of. “It is really about love and joy and humanity and forgiveness and being true to yourself. It’s such a special show that I just gave myself the chills just thinking about it.”

“Ted Lasso” is rated TV-MA (mature audiences) for ages 15 and up.