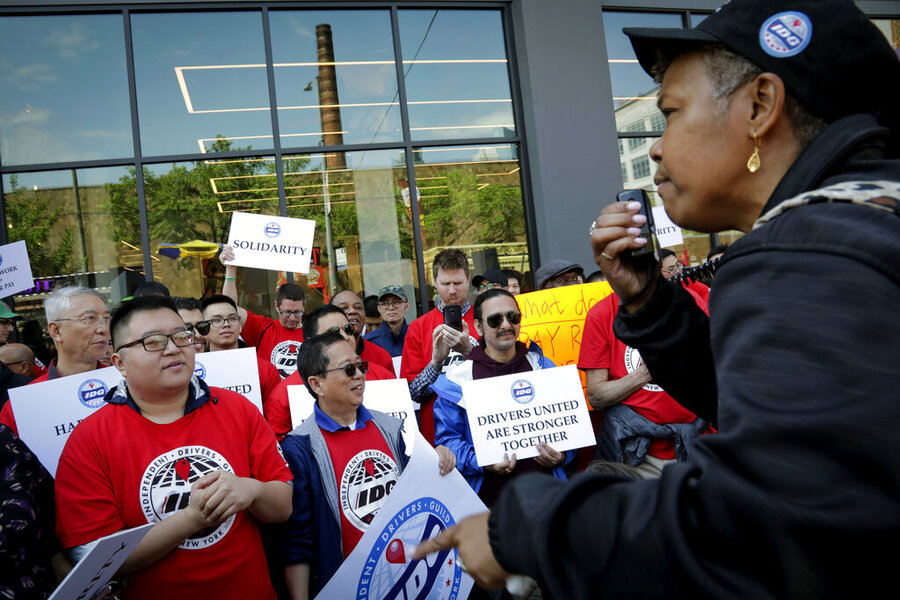 Drivers for Uber and Lyft have staged strikes in cities across the United States, urging Congress to grant gig workers the right to band together and push for better wages and working conditions.

Wednesday’s protests – from California to Maryland – reveal an increasingly fractious dispute over how gig workers should be regarded by law and what rights they deserve at work.

The question is under debate in Congress as lawmakers wrangle over whether the self-employed can bargain collectively as part of a wider Protect the Right to Organize Act (PRO Act).

“We want a seat at the table,” said driver Alvaro Bolainez, part of a 50-strong protest at Los Angeles airport.

Mr. Bolainez urged his fellow drivers to turn off their apps and lay down their keys, saying his pay was consistently and unilaterally cut by the rich ride-sharing companies he serves.

A spokesperson for Lyft said in an emailed statement that the company is “fighting to expand benefits and protections for drivers in a way that allows them to keep their independence. This is the type of forward-looking approach our drivers want.”

Uber referred questions to the Protect App-Based Drivers and Services Coalition, a pro-industry group, which said most driver earnings were on the rise in California.

It also sent remarks from drivers who oppose the strike.

“I treat it like it’s a business and I drive smart,” said Jim Pyatt, a part-time driver in California. “I never make less than $35 an hour and I love the flexibility.”

But at the L.A. rally, drivers told a very different story – recalling days when earnings lagged the minimum wage, of idling roadside for hours or paying out of pocket for vehicle repairs.

Labor organizers want to roll back a 2020 California ballot measure that cemented gig workers as independent contractors after their drive firms mounted a $200-million campaign against a state law aimed at forcing them to treat workers as employees.

A Reuters calculation found the 2020 measure had saved Uber and Lyft $392 million each in costs such as payroll taxes and worker compensation.

“It created a second-class status for all app-based workers in California,” said Nicole Moore, a rally organizer who urged the Senate to pass the PRO act when it votes on a multi-trillion-dollar spending package under negotiation.

The law would, among other measures, reclassify many independent contractors as employees for the purpose of collective bargaining, though not for wage laws and benefits.

Veena Dubal, an employment law professor and critic of gig company practice, said with debate fomenting over worker rights, the West Coast was a microcosm of a far bigger problem.

“Although the action is centered in California, it’s really workers over the country participating because they know California is the epicenter of the business model, but the companies are trying to export it elsewhere,” she said.

In recent months, gig firms have courted unions and state officials in an effort to cement their workers’ status as independent contractors in all U.S. states so as to cut costs.