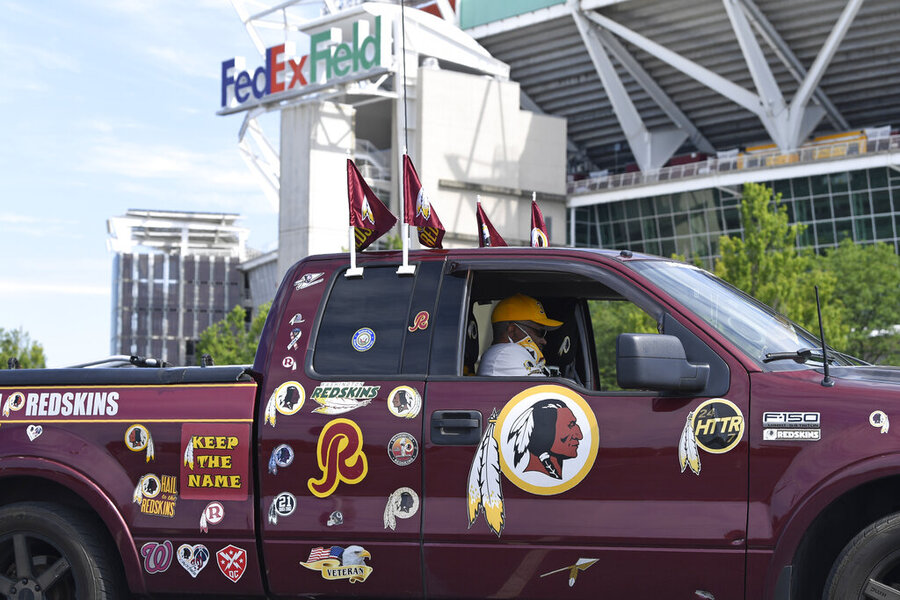 Washington will not have any kind of Native American imagery as part of its next name, and the subject is still evolving across sports in the year since the storied NFL franchise dropped arguably the most polarizing moniker left in the pros.

Tuesday marks the one-year anniversary since Washington dropped the name Redskins and the accompanying Indian head logo after 87 years amid pressure from sponsors and decades of criticism that both are offensive to Native Americans. The Washington Football Team will be around for one more season, with a new name set to be revealed in early 2022.

With the Atlanta Braves, the NFL’s Kansas City Chiefs, the NHL’s Chicago Blackhawks, and the NCAA’s Florida State Seminoles holding onto theirs for now, and bears watching as the possibilities get narrowed down, Washington’s process is the furthest along.

“The Washington Football Team’s announcement that they will not be using Native American imagery is a major step towards reconciliation, justice, and equality, but there’s still more work to be done,” said Crystal Echo Hawk, founder and executive director of Native American-led nonprofit IllumiNative. “This is a step in the right direction, we ask that the NFL, MLB, and NHL urge the Kansas City Chiefs, Atlanta Braves, and Chicago Blackhawks to follow Washington Football Team president Jason Wright’s lead in order to stand on the right side of history.”

Mr. Wright, who was named Washington’s team president in August, ruled out Warriors in a lengthy post on the team’s website Monday, saying feedback from Native American communities showed “deep-seated discomfort” about that name.

“Failing to acknowledge our past use of Native imagery in the consideration of the new name wouldn’t be mindful of the individuals and communities that were hurt by the previous name,” Mr. Wright said. “We will choose an identity that unequivocally departs from any use of or approximate linkage to Native American imagery.”

Mr. Wright said Washington is “down to a short list” of names. After several months of chatter about “R” options such as Redwolves, Redtails/Red Tails, or Redhawks, it’s possible “Red” is taken out of the equation entirely.

That would distance Washington from the old name more than changes at the college level in the 1990s: St. John’s going from Redmen to Red Storm and Miami of Ohio dropping Redskins to become the RedHawks.

Mr. Wright said team officials are “confident that our new brand identity will honor our legacy and lead us into our future as a franchise.”

As the latest reckoning over racial injustice, iconography, and racism continues in the United States, Washington is far from the only franchise considering a change, while others defend the status quo.

Known as the Indians since 1915, Cleveland’s Major League Baseball team will be called Guardians. The choice of Cleveland’s Guardians will undoubtedly be criticized by many of the club’s die-hard fans.

The organization spent most of the past year whittling down a list of potential names that was at nearly 1,200 just over a month ago. But the process quickly accelerated and the club landed on Guardians.

In 2018, the Indians stopped wearing the contentious Chief Wahoo logo on their jerseys and caps. However, the team continues to sell merchandise bearing the smiling, red-faced caricature that was protested for decades by Native American groups.

Protests have followed the Chiefs on two Super Bowl trips, and last fall they barred headdresses and war paint for fans at Arrowhead Stadium. They’re still facing calls to abandon a tradition of fans breaking into a “war chant” while making a chopping hand motion designed to mimic the Native American tomahawk – which is not unique to Kansas City.

A coalition of Native American groups put up billboards in the Kansas City area to protest the tomahawk chop and Chiefs’ name.

North of the border, Edmonton of the Canadian Football League reversed course last summer by dropping the name Eskimos in the aftermath of Washington’s decision, temporarily becoming the EE Football Team. On June 1, Elks was announced as Edmonton’s new name.

Cleveland and Atlanta appear to be at opposite ends of the spectrum.

Cleveland announced in December it was dropping Indians and, like Washington, was vetting a final list of possibilities. The ballclub announced the name change Friday with a video on Twitter narrated by actor Tom Hanks, ending months of internal discussions triggered by a national reckoning by institutions and teams to permanently drop logos and names considered racist.

The Braves have resisted calls for a name change. The team has not wavered from a firm statement in a letter to season-ticket holders in 2020 that said: “We will always be the Atlanta Braves.”

Even the “tomahawk chop” has returned along with fans this season after a Cardinals pitcher said during the 2019 playoffs that it was disrespectful, and the team stopped encouraging the chant. The death of Hall of Famer Hank Aaron in January led some fans to propose a switch to Atlanta Hammers to honor “Hammerin’ Hank.”

The Chicago Blackhawks have shown no signs of considering a name change any time soon, with the club contending it honors Black Hawk, a Native American leader from Illinois’ Sac & Fox Nation. CEO Danny Wirtz said in December that the Blackhawks “continue to deepen our commitment to upholding our namesake and our brand.”

Like the Chiefs, the Blackhawks banned headdresses at home games as part of their pledge to honor the Native American community, with which the team has tried to strengthen ties over the past year.

After Miami of Ohio, St. John’s, Syracuse, North Dakota, and others made changes, a handful of U.S. colleges and universities maintained Native American nicknames for sports teams and received waivers from the NCAA because of support from local tribes.

Those include the Florida State Seminoles, Utah Utes, and Central Michigan Chippewas.

Illinois retired the Chief Illiniwek mascot in 2007 but has kept the Fighting Illini name.

The National Congress of American Indians reports 29 schools in the U.S. have moved away from a Native American name or imagery so far in 2021. It’s not clear how many more changes happened in the immediate aftermath of Washington’s decision from July 13-Dec. 31, 2020.

“True respect for Native people and other people of color requires our country to rid itself of the symbols of racism and intolerance that have far too long been embedded in popular culture and which have marginalized and dehumanized us,” NCAI president Fawn Sharp said. “NCAI will not rest until all offensive Native-themed mascots and associated imagery are removed from popular culture.”