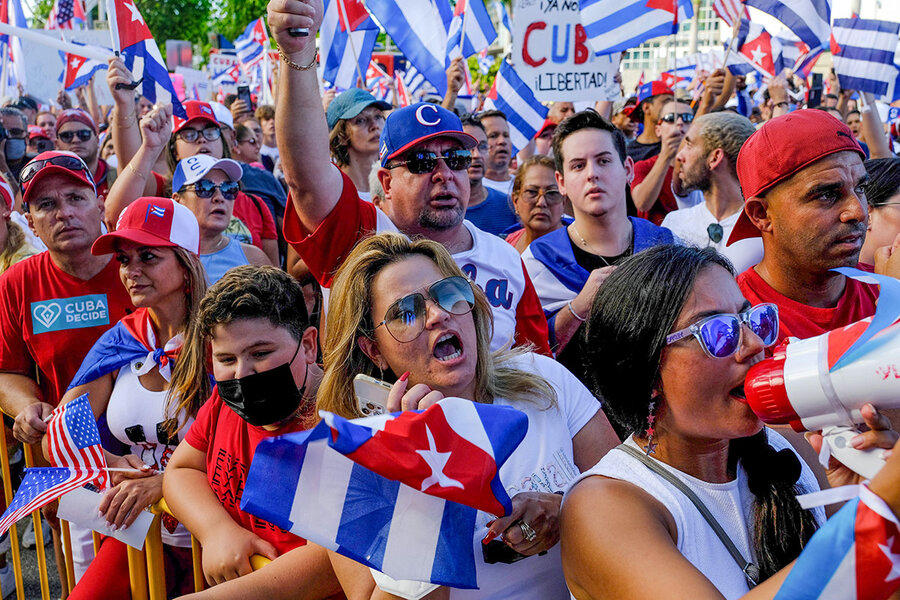 Dissatisfied Cubans marching in the streets was the direct result of the “U.S. federal government’s inhumane treatment of Cubans” through the 60-year-old economic embargo, the Black Lives Matter Global Network Foundation said. The freedom at stake is in fact “Cubans’ right to choose their own government” and to maintain Cuba’s “commitment to sovereignty and self-determination.”

The barrage of commentary may have done little to clarify what is actually transpiring in Cuba. But it underscores how this island nation of 11 million people continues to foment deep passions among Americans across the political spectrum more than six decades after a young bearded Fidel Castro ushered in his communist revolution.

“The United States and Cuba have a long and intertwined history during which Cuba and the Cuban people in their different representations have played the role of convenient proxies for the ideals and fears of both the right and the left in this country,” says Michael Bustamante, an assistant professor of Latin American history at Florida International University in Miami.

“What we are seeing in response to the spontaneous uprising in Cuba is both ends of the political spectrum here making very distinct but similar kinds of projections onto Cuba,” Dr. Bustamante says.

“On the left, it’s still the ideal of Cuba as the role model of a more equal society with a certain racial equality the U.S. hasn’t achieved,” he adds. “On the right, people project their worst fears of what they believe any form of socialism in the U.S. would mean.”

When President Barack Obama normalized relations with Havana in 2015, many regional experts predicted that Cuba’s hold on the American imagination would dissipate. More open relations and unavoidable economic change in Cuba would leave it resembling other small Latin American countries more than standing out from them.

But that was before the past tumultuous year in the U.S. A summer of nationwide protests over racial equality was layered on top of the pandemic and government measures to address it. Together, they fed intense national debates on issues like big government versus individual rights and on hot-button topics like institutional racism, socialism, and freedom.

When the Cuban protests came along, Dr. Bustamante says, many Americans were ready to see in them the convictions that had solidified over the previous year.

Among those on the right who see everything from mask mandates to child tax credits as creeping socialism, “They took one look and said, ‘They want to turn us into the mirror image of that!’” he says.

One thing the Cuba uprising has accomplished in the U.S. is a hardening of the Biden administration’s approach to Cuba. Before the demonstrations, the White House was moving toward a reversal of the punitive measures the Trump administration took and toward a return to the opening of relations President Obama had initiated.

No more. On Thursday President Joe Biden announced new sanctions on Cuban officials implicated in the repression of protesters. Moreover, Mr. Biden said the administration is working on providing internet services in Cuba that will circumvent official censorship efforts. It is also considering a new remittance policy aimed at allowing for private money transfers that do not at the same time enrich the government.

Young Cubans heeded social media calls to fill the streets in protest against everything from a shrinking economy and threadbare services to limited individual rights. For some Americans, the marches were really about one thing: freedom.

Yet some experts caution against reducing the events transpiring in Cuba to a quest for freedom. While that allows all political sides in the U.S. to see their version of freedom in the protests, it overlooks the complexities of the protests and the inconvenient realities they also present.

“Unfortunately, Cuba is being used as a political pawn in this very intense debate between the right and the left over their differing conceptions of freedom,” says Jorge Felipe-Gonzalez, an assistant professor of history and expert in Afro-Latin American relations at the University of Texas at San Antonio.

“What I hear mostly from the left in what they mean by freedom – and this you can see in the Black Lives Matter statement – is the idea of a more collectivist freedom, that because of the embargo Cuba cannot be free and sovereign if it is not free from imperialist interference,” he says.

“On the right [it appears to be] more about individual freedoms – freedoms of expression, of political parties, freedom of the press.”

For both sides, he says, conceptions of the role of the state form a key dividing line.

“One side thinks about freedom with an emphasis on equality of outcomes – and in order to achieve more equality of outcomes the state has to be more interfering in people’s lives,” he says. “And the other side is thinking of it more as the freedom of individuals as independent from the state.”

For Dr. Felipe-Gonzalez, who emigrated from Cuba to the U.S. in 2013, both the right and left in the U.S. are avoiding the aspects of the protests in Cuba that don’t fit neatly into their narratives of the events.

And he speaks from experience. Dr. Felipe-Gonzalez recently penned an opinion piece in The Atlantic in which he chided BLM for “missing the point of the protests” with its rhetorical support of Cuba’s communist government. He was attacked as a right-wing extremist supporting a U.S. invasion of Cuba – all news to him.

What he was pointing out, he says, is that BLM’s focus on a revolutionary Cuba that no longer exists has blinded it to realities that the racial justice movement should be interested in. Black Cubans have formed a disproportionate share of the protesters (and of those being detained). Discrimination has kept Black Cubans out of many jobs created by Cuba’s economic reforms, for example in tourism. And institutional racism has grown in Cuba in recent years.

At the same time, he says, the right suffers from the same blindness to realities it would rather ignore.

“The right declares the protests to be about freedom from government control, and to a certain extent that is true,” he says. “But it is also true that the Cubans in the streets are animated by a failure of the Cuban state to continue delivering the promises of free and equal education and free quality health care.”

As Dr. Bustamante says, “Some, including many Cuban Americans, don’t want to hear this, but there are many Cubans who believe in social rights. So at least partly what Cubans are responding to is a state that is losing its capacity to provide to its citizens,” he says.

“That doesn’t suggest strong support for the libertarian agenda many envision for Cuba,” he adds, “but it does suggest that a big question like what freedom means and how Cubans hash it out is going to be very much up for grabs.”