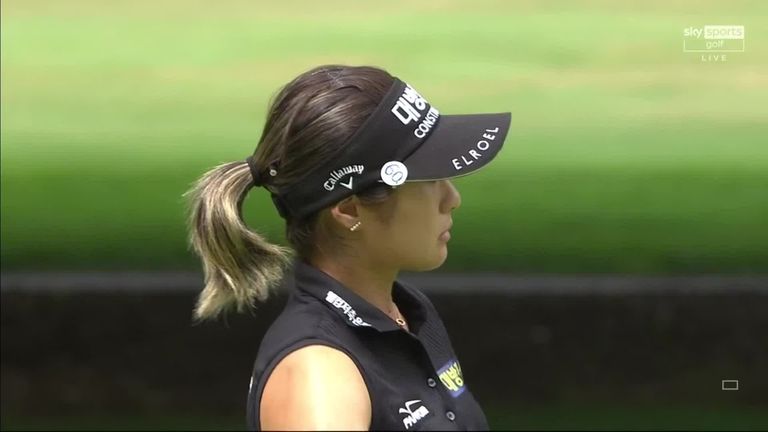 Jeongeun Lee6 moved a big step closer to claiming a second major title after extending her lead to five shots at the Amundi Evian Championship.

Lee6, who equalled the lowest round in major history with a bogey-free 61 on Friday, mixed an eagle and four birdies with three bogeys on her way to a third-round 68 at Evian Resort Golf Club.

The Korean heads into the final day on 18 under and with a commanding advantage over Yealimi Noh, who birdied her final three holes to card a four-under 67, with former world No 1 Lydia Ko six off the pace in third spot after a blemish-free 68.

“I’m satisfied with my result today because I did miss some shots a little bit, but I did up and down well,” Lee6 said. [At the 2019 US Women’s Open] I didn’t lead [going into] the final round, but this tournament I’m leading so it’s a little bit different. I’m going to be a little bit nervous.”

Lee6 got up and down from thick rough to save par at the first but dropped a shot at the third, only to roll in a 20-foot birdie at the fifth and pick up a shot at the par-five ninth to reach the turn under par.

The overnight leader bounced back from a bogey at the 10th to make a hole-out eagle with a wedge at the par-four next, with Lee6 adding a two-putt birdie at the 15th and cancelling out a bogey at the 17th by taking advantage of the par-five last.

Minjee Lee birdied all of her last four holes to post a joint-low round of the day 65 and jump into tied-fourth alongside Ayaka Furue and Pajaree Anannarukarn, with Ariya Jutanugarn falling eight off the pace after a two-over 73.

England’s Charley Hull jumped inside the top-10 after a third-round 66, putting her alongside In Gee Chun and Hyo Joo Kim on eight under, while Georgia Hall is now in a share of 21st thanks to a six-under 65.

“I feel like I’m in a good place at the minute,” Hull said. “I kind of just kept focused. I knew there was plenty of birdie chances out there. Made quite a few birdies this week each round, so just need to eliminate the bogeys and the double bogeys.

Who will win the Amundi Evian Championship? Watch the final round live on Sunday from 10.30am on Sky Sports Golf and – for free – on the Sky Sports Golf YouTube channel.