A home-builder who cannot make with his own hands what he cannot buy is a bad one. You think something like that, creating another homemade product. But there is a little catch! The end result depends not only on the straightness of the hands, but also on the materials and tools used. And so it happened in the process of creating two homemade compressors. 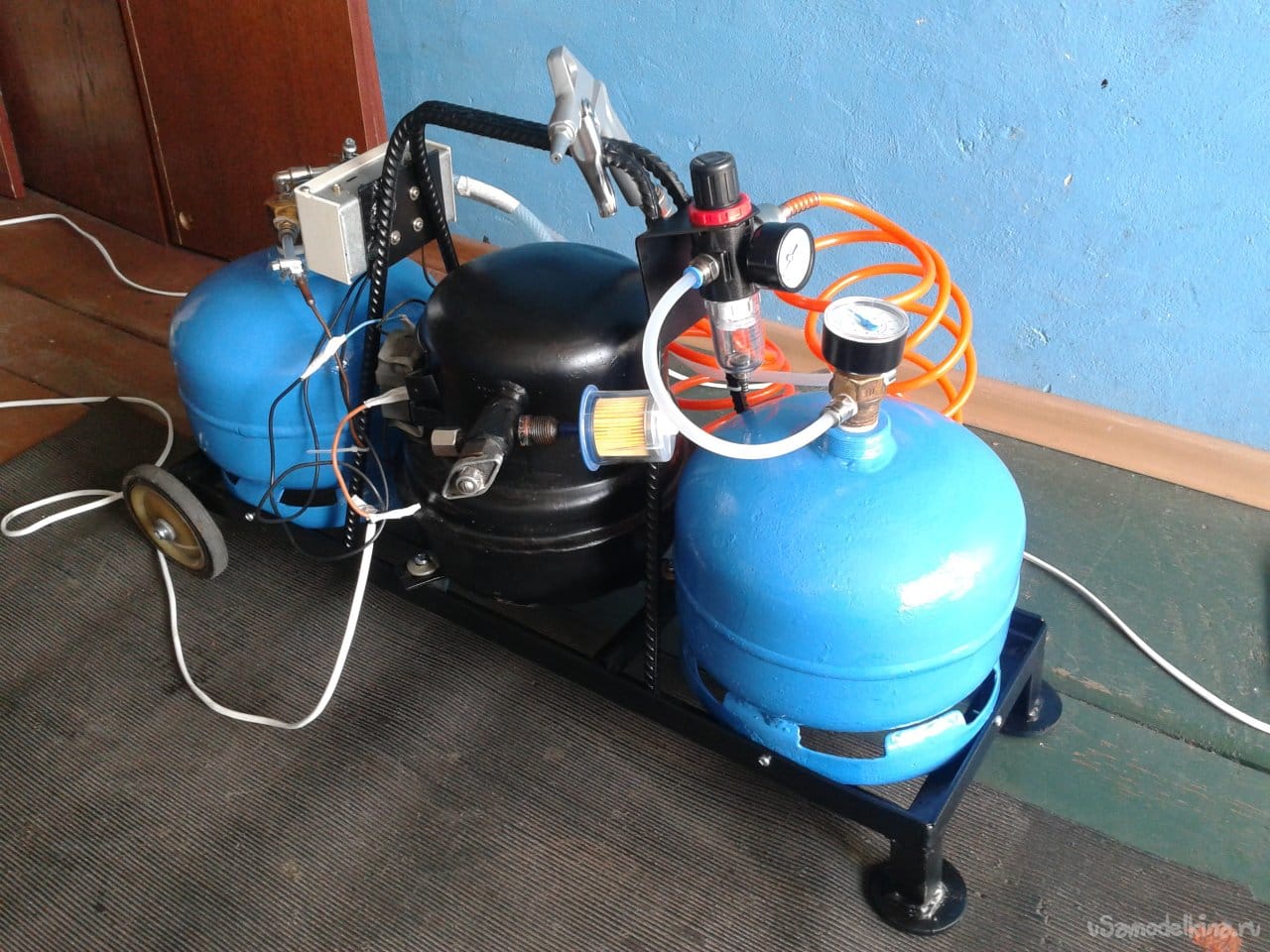 A compressor is an essential and useful thing in the household. And in a garage without a compressor is generally tight. Especially if you periodically do something with your own hands: blow off dirt and sand, oil and grease, paint something, or just blow compressed air into the interior and engine compartment from debris and dust.
When the first beetles crawled along the car body, and the color of the paint in the spray could not be matched exactly, I thought about how to solve this issue. I didn't want to spend a lot of money on fixing minor flaws. To buy paint on the selection is not a problem, but how to apply it? Went through the market, even the smallest pistols were not cheap at all. So I bought an airbrush for the first small paint job. 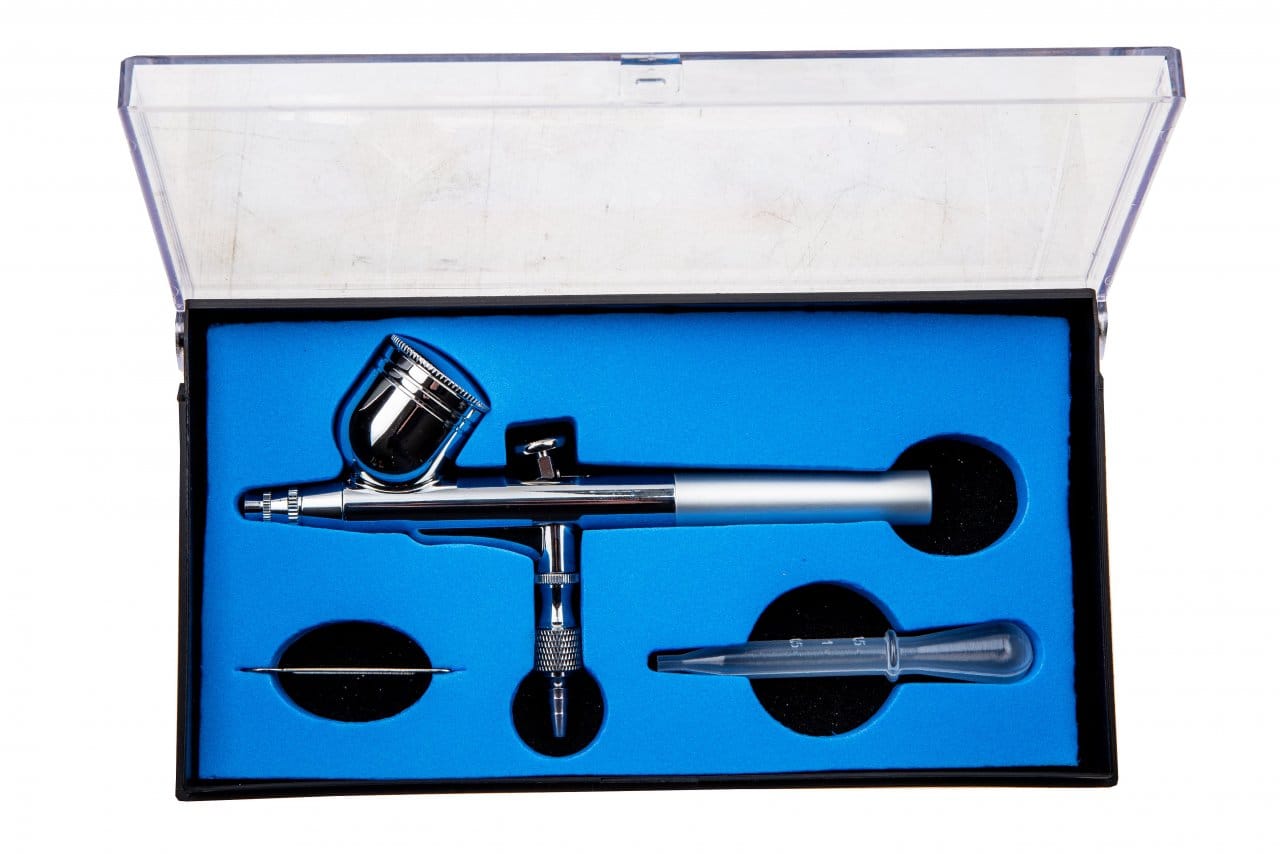 It turned out to be about one and a half to two times cheaper than the cheapest paint spray gun. The airbrush does not need a very high pressure of 1-3 Bar and a small volume of air to operate, but it is still hard without a compressor. Of course, you can do it simply: pump up the wheel and use compressed air from the wheel, but you still need a pressure regulator, otherwise it’s not painting, but flour.
I built a relatively simple structure from a car compressor “Tornado”, a car spare wheel as a receiver and a pressure regulator donated by a friend. There was no pressure switch in this homemade product, I hoped that the compressor's performance was not high, plus air from the wheel would be consumed during painting, but it was still a bit dumb, given that a small automobile piston compressor is capable of pumping pressure up to 10 Bar. For my spare tire, the maximum working pressure was 2.5 Bar. Once I got carried away with painting and pumped up the wheel a lot. The wheel did not jerk, but later I was more careful.
All these ordeals led to the fact that I seriously thought about assembling a homemade compressor. Studying the issue on the Internet led me to create the first model.
For air injection it was proposed to use a compressor from an old refrigerator. The low productivity was successfully compensated by the quiet operation. But where to get an inexpensive working compressor from a refrigerator? A couple of weeks of interviewing friends, acquaintances, colleagues, and I got two quite working compressors.
For the receiver, it was mainly proposed to use a cylinder from a fire extinguisher. Of course it's good to offer it, but where can you really get it? I got the idea to use used gas cylinders with a volume of 5 liters. 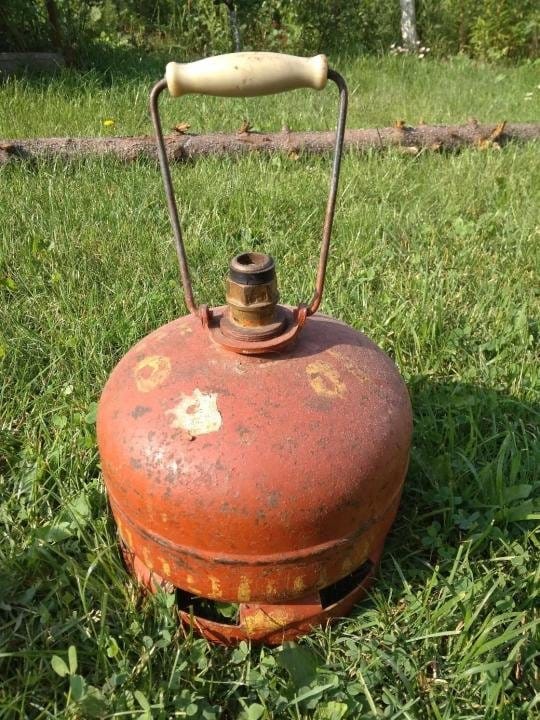 The price for them was small, I found them on the ad, went and bought two of them. 10 liters should have been enough for small jobs. I drained the remaining gas from the cylinders, unscrewed the valves. For a long time I rinsed the cylinders with a solution of magrantsovka and detergent to eliminate the odor of the odorant.
I bought a pressure regulator with a moisture separator in a hardware store. 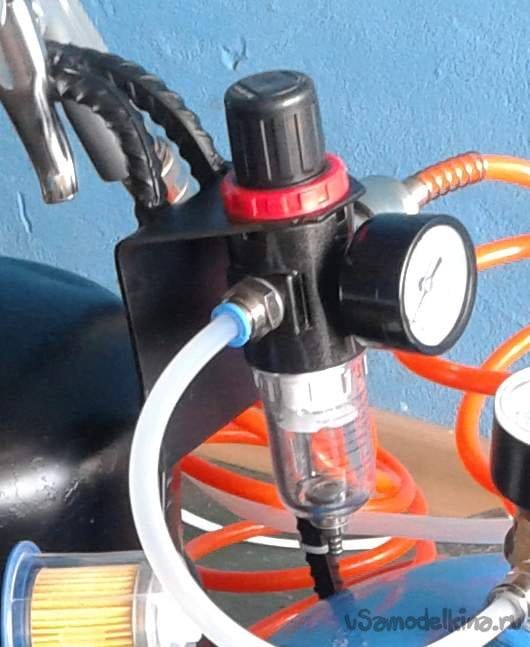 This turned out to be the most expensive part of the homemade product. You could of course use the gift, but it was too big for this homemade product. I used a pressure switch from a faulty air conditioner as a pressure switch.
Of the two compressors, I chose the one that had a large capacity. Plus, when working, he almost did not spit oil. I placed two receivers on the sides of the compressor for weight distribution. Everything is bolted to a single welded frame. After assembly, it turned out that the compressor has a decent weight and it is not so convenient to carry it by the handle. For ease of movement, installed wheels. It is much easier to ride.
Let's deal with the connection of pneumatics. Having seen how it was done on industrial equipment, I used 8mm pneumatic tubes and quick-detachable fittings. To install them, you need to drill holes in the valve and cut a half-inch thread. Having estimated the pneumatic circuit, I decided to make three holes with a half-inch thread on each valve. On the one hand, it turned out to be easier to cut the threads, on the other hand, it made it possible to do without tees, and on the third, a slight modification turned the first cylinder into a collector of water and oil condensate. The bottom line is to install a tube into the top fitting, which goes down almost to the very bottom of the cylinder.
After installing the valves with fittings, let's start connecting the pneumatic tubes. The outlet from the compressor is connected to the top fitting of the first cylinder. A pressure switch is connected to one side fitting, a second cylinder is connected to the second. 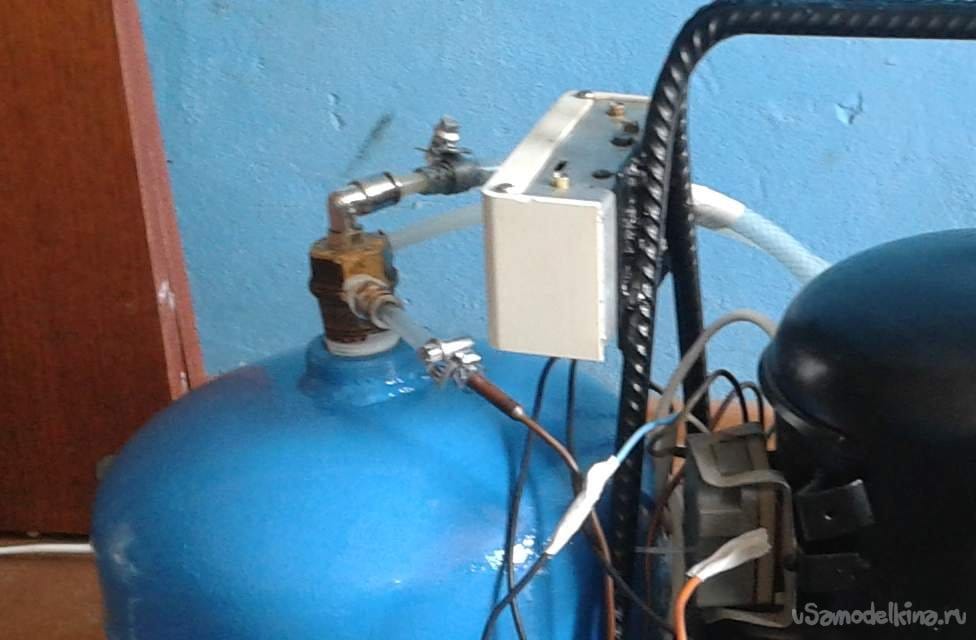 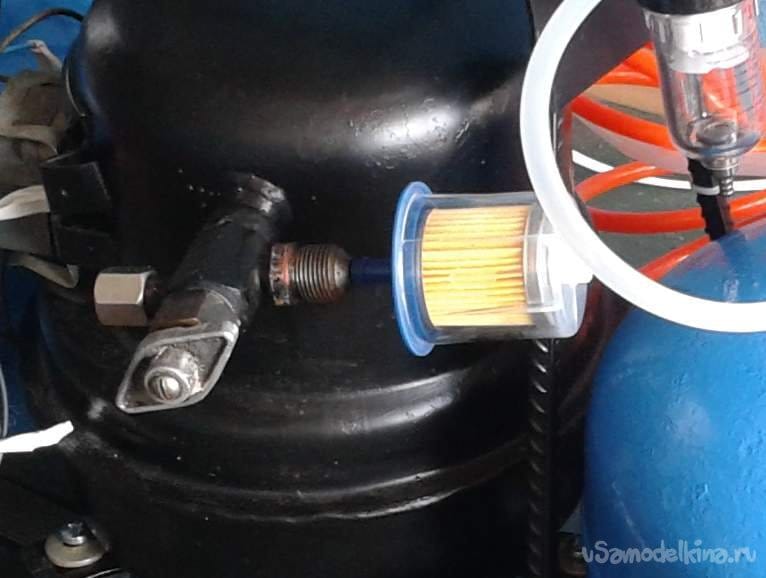 First tests: everything works fine. The air was pumped up to 7 Bar for 5-7 minutes. For my purposes this was quite enough.
It took a couple of days after the assembly. Problems started with the compressor. At first, it pumped well on a cold one, then with warming up it stopped pumping pressure more than 4-5 Bar, and after some time the pressure stopped rising above 2-3 Bar. Something happened to the valves …
When the gates were painted with the godfather, I had to connect the second small one in parallel with the first compressor. It spits heavily with oil, its performance is much lower, but it pumps up pressure up to 8 Bar without any problems.
I did not want to repair or alter the first compressor (I didn’t want to look again, it is not known in what state the compressors were), but thought about creating a new stationary and more powerful. 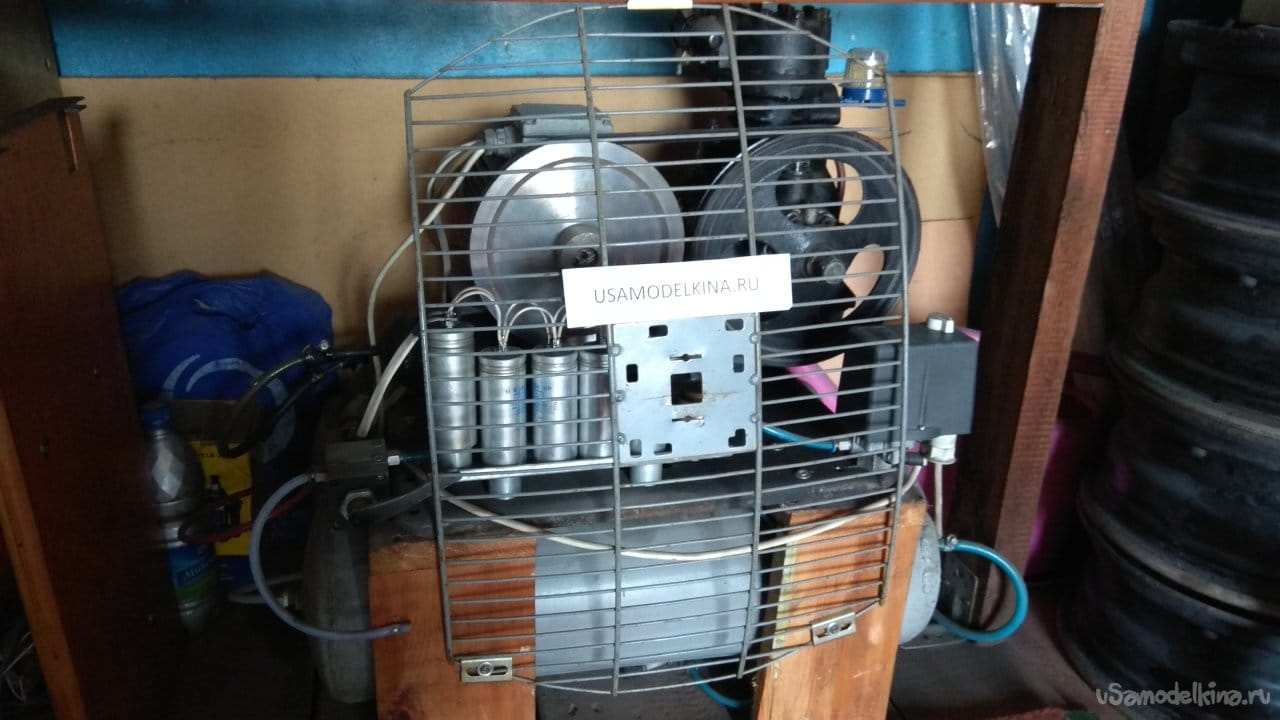 Three receivers of 22 liters each and a two-piston compressor with an oil separator were purchased at a reasonable price. The owner of the compressor was going to make it himself, but as a result, after the compressor bulkhead with the replacement of the rings and the assembly of the oil separator filter, he thought well and bought himself a new budget compressor. In the load, I was presented with almost all the parts from the second similar compressor for spare parts. The price for everything came out to be about half the cost of a new single-piston budget compressor with a 20-liter receiver.
All that remained was to find an engine, a pulley for it and put everything together. I didn't think there would be a problem with the engine, but it turned out to be difficult to find at a reasonable price. A colleague helped, gave me an old engine from a concrete mixer. The motor had a slightly bent shaft, low rpm and three-phase power supply. It turned out to be problematic to tighten two more phases into the garage, especially since this is not my garage, but my godfather. I will use a phase-shifting capacitor. I counted something around 50 uF. I bought inexpensively a whole bunch of decommissioned equipment, connected them in parallel, there were no other cheap options at that time. 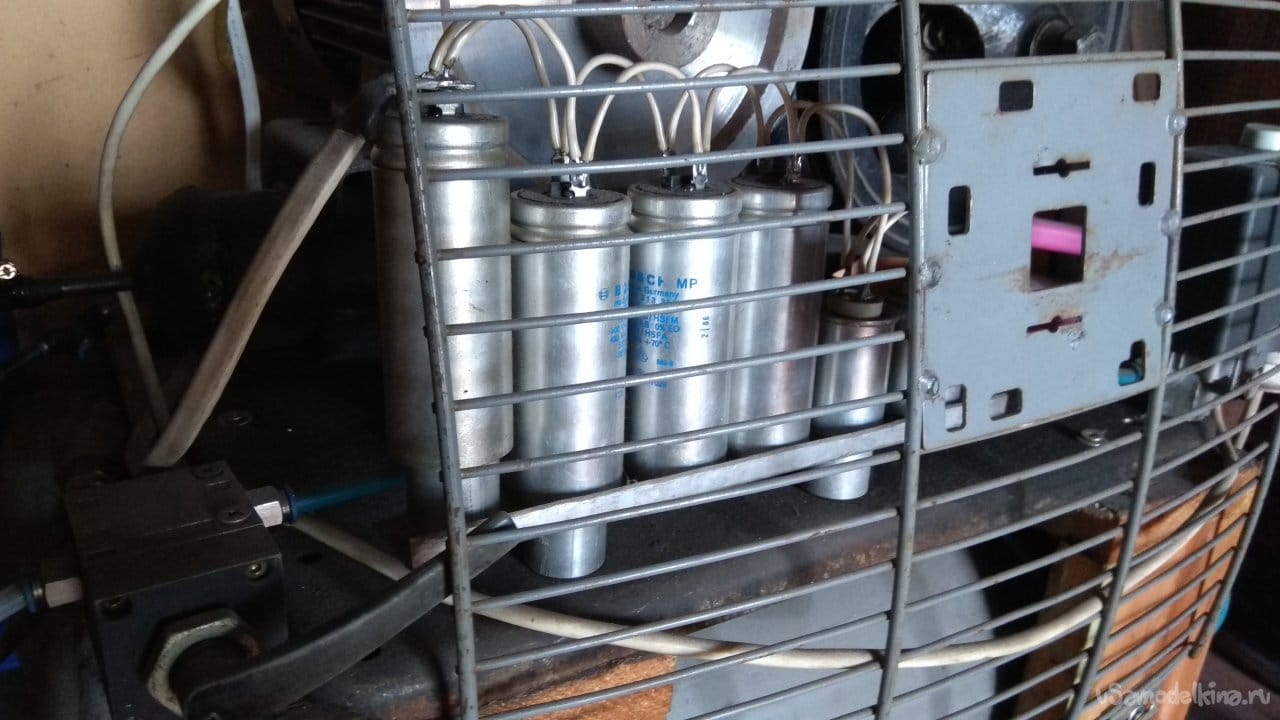 Qom helped with the pulley.
make the diameter as large as possible, but still the compressor does not develop even half the power, but it works relatively quietly.
I cleaned the receivers from rust and old paint for several days. Painted. The first compressor and the new paint gun came in handy. 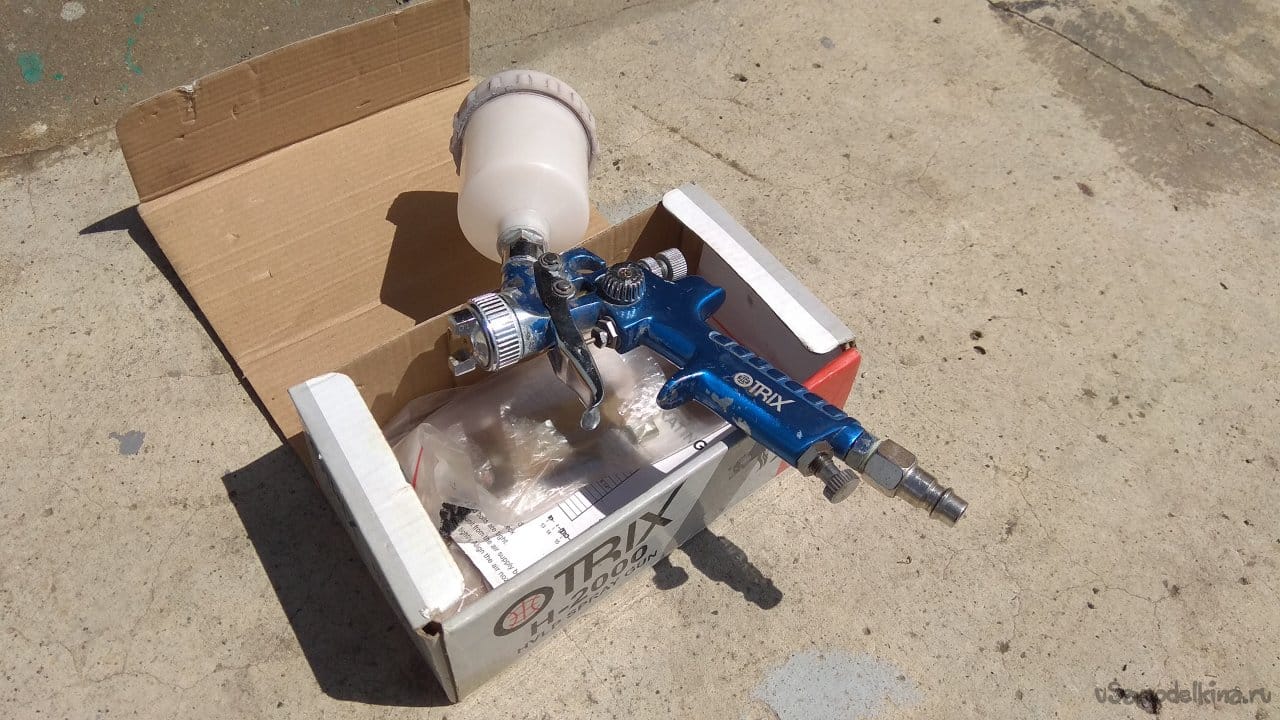 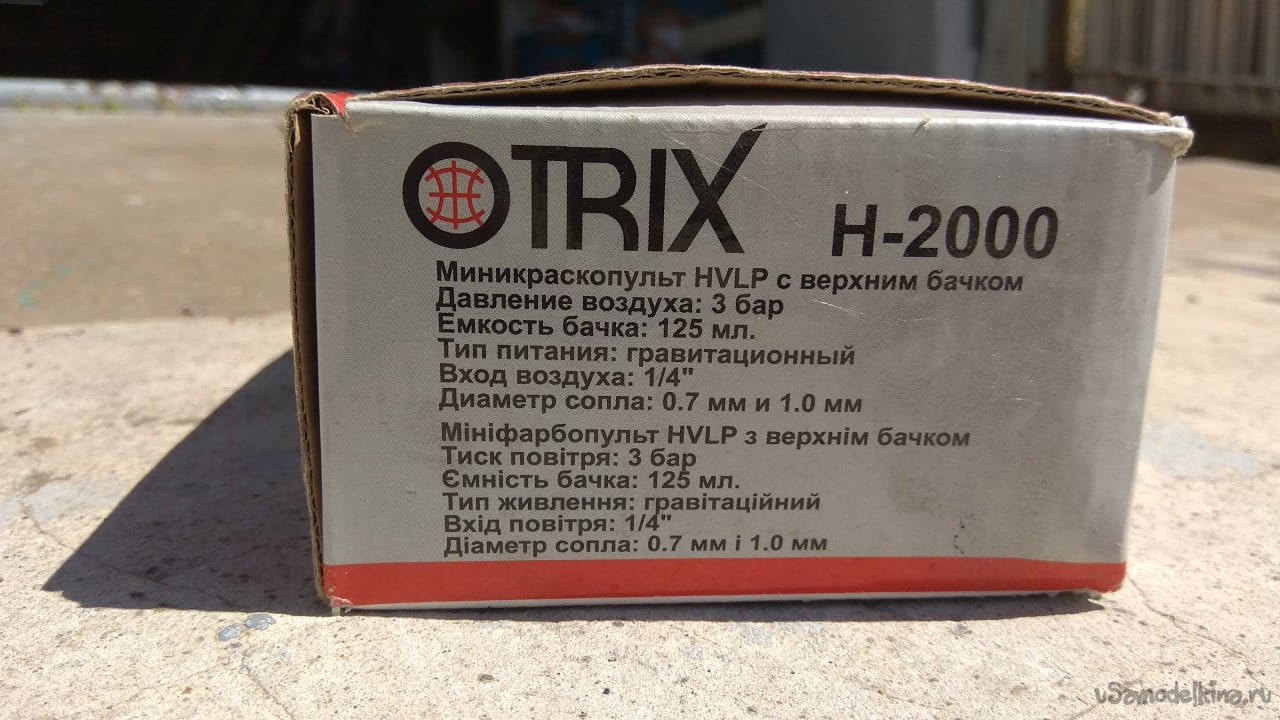 I bought a couple of inexpensive large and beautiful pressure gauges.
I decided to separate the receivers, two for the compressor, one at the exit from the garage. 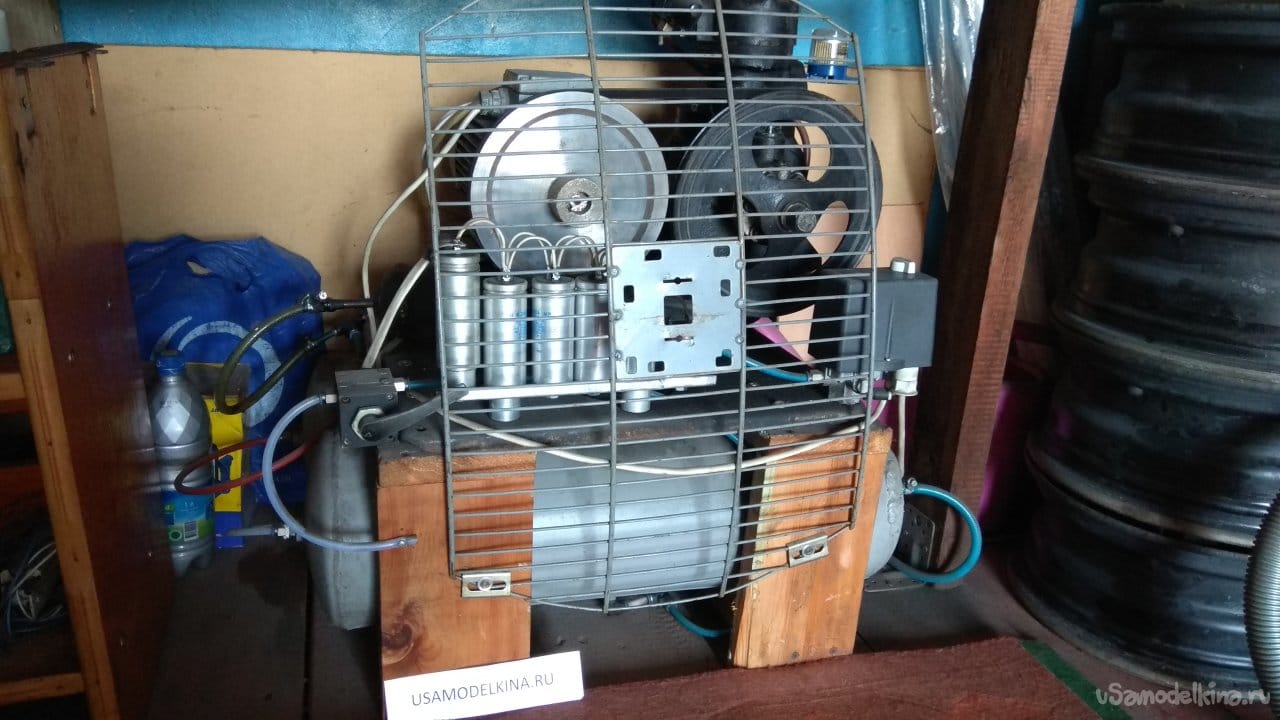 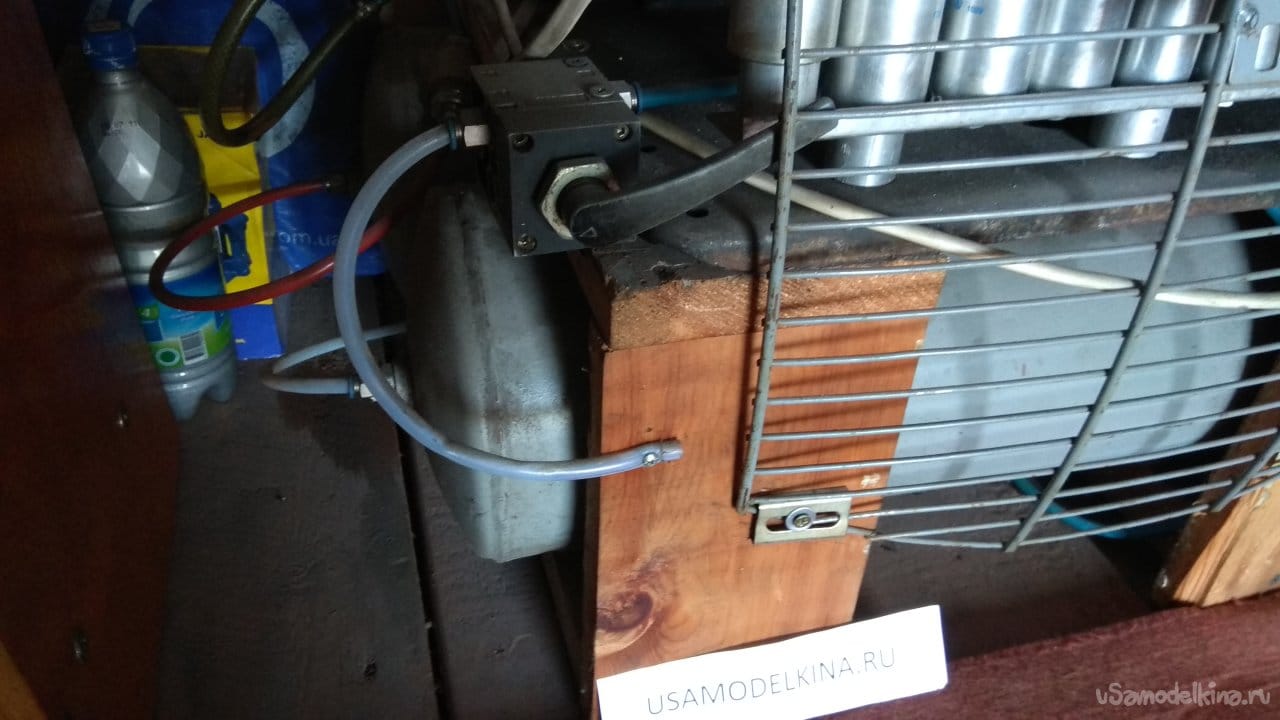 A safety valve was installed at the bottom of the third receiver, through which condensate can also be drained, although in fact there is no condensate, it accumulates only in the first receiver and oil separator. < br> During a trial run, the first design flaw was revealed: the engine power is not always enough to start on a full receiver. In the first version, I installed a drain cock in front of the check valve, which constantly bleed air.

But at high flow rates, the pressure in the oil separator did not have time to bleed off. I had to fence the structure with a drain solenoid valve. 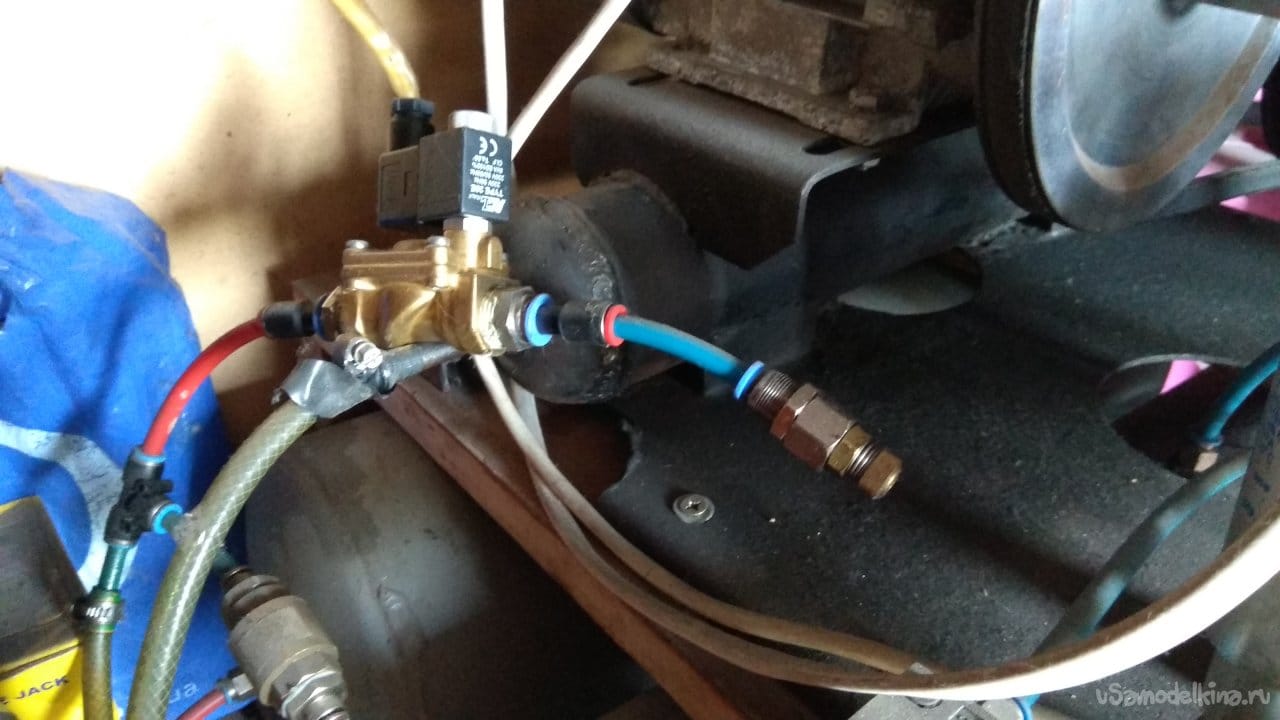 When the engine is turned on, the solenoid valve closes; after the engine is turned off, the air from the oil separator is completely vented. This allows the compressor to start easily. The check valve served for a couple of years and failed. Put the usual water.
I was afraid that frost and oil would not last long, but the valve has been working properly for 8 years.
To regulate the pressure, a pressure regulator with a moisture separator is connected to one of the receiver outputs. On top of the receiver itself, a quick release is installed. 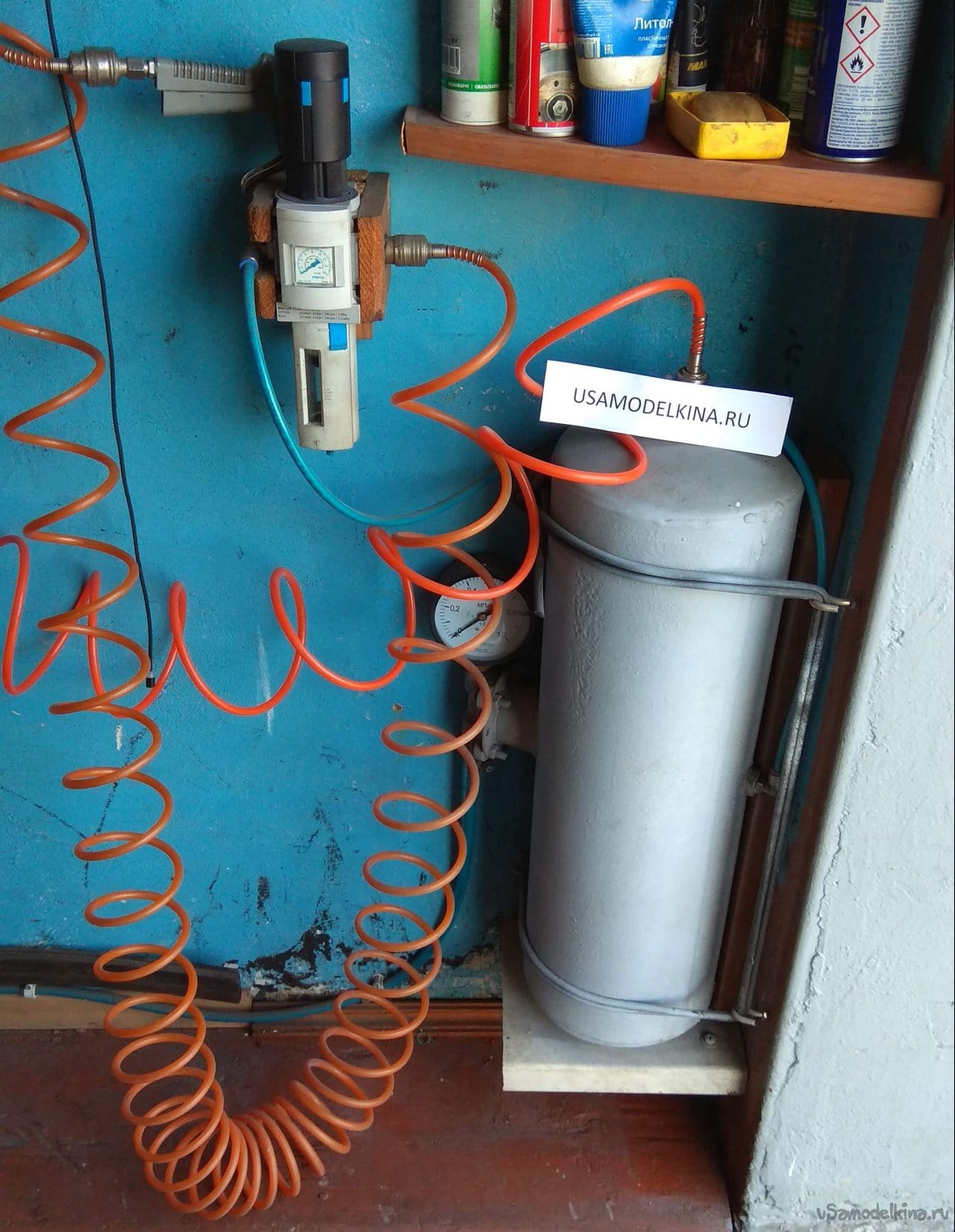 Switches the compressor on and off with the pressure switch. Thank you friend for the gift.
The bottom line: the compressor works well enough. There is a small drawback – not high enough performance to be able to connect to the compressor, for example, a wrench or sandblast. And there was such a bright thought.