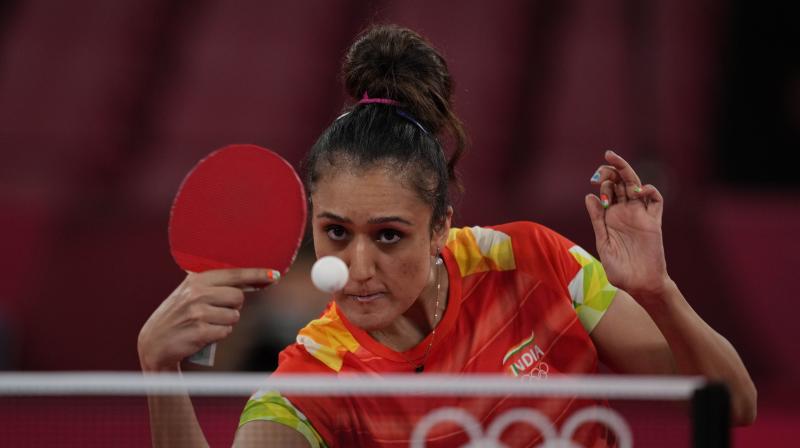 Tokyo: India's slim hopes for a table tennis medal in mixed doubles vanished in no time but Manika Batra and Sutirtha Mukherjee made promising starts to their women's singles campaign at the Tokyo Olympics here on Saturday.

The start to India's table tennis campaign was disappointing with Sharath Kamal and Manika losing 0-4 to the third seeds Lin Yun-Ju and Cheng I-Ching of Chinese Taipei in the mixed doubles round of 16.

However, world number 62 Manika returned to beat 94th-ranked Tin-Tin Ho of Britain 4-0 in her singles opener while 98th-ranked Sutirtha made a strong impression on her Olympics debut with a come from behind 4-3 win against 78th-ranked Linda Bergstrom of Sweden.

Mukherjee plays Portugal's Fu Yu in the second round while Manika takes on Ukraine's Margaryta Pesotska, who is ranked 32

The match saw plenty of long rallies with Linda, who is a defensive player, relying on backhand pushes away from the table. The Indian, who also plays with a pimpled rubber like the more accomplished Manika, had to be patient to win points against the Swede.

Former player and India great Kamlesh Mehta felt what made the win Sutirtha's win more remarkable was that she had almost no practice against a defensive player.

"It was a very good win because in India we don't have a lot of choppers (defenders) to play with," reckoned Mehta.

Earlier in the mixed doubles, Sharath and Manika had to make all chances count against a superior opponent from Chinese Taipei but they couldn't do so after leading 5-1 and 5-3 in the first two games.

The power of 19-year-old Lin from both the flanks was too much to handle for the 12th seeded pairing of Sharath and Manika, who came into the Olympics having won the qualifying competition.

"We should have won the first game from 5-1 and build pressure on them. You need to do that against a high quality team. Lin is one of the best players and he showed," Sharath told PTI.

"They made us commit errors. We didn't serve long yet he managed to produce winners on return. Shows his class. We had felt good about our game going into the match.

"The practice match against Romanian pair yesterday I felt really good about our game. The draw could have been better too but all focus on the singles now," he added.

The Indians had no answer to Lin's bullet-like tops-spin drives from both forehand and backhand.

Manika did trouble Lin and Cheng whenever she could use her long pimpled rubber but the Chinese Taipei duo had come well prepared and did not let the top women's paddler to play her game.

The Indians had to make the 5-1 lead count in the first game to have any chance in the match but Lin and Cheng won eight points in a row to gain control.

Sharath and Manika had practised together for just three days in the national camp before boarding the flight to Tokyo.

With their performance in the qualifying event, the Asian Games bronze medallists had raised hopes of a historic medal at the Olympics.