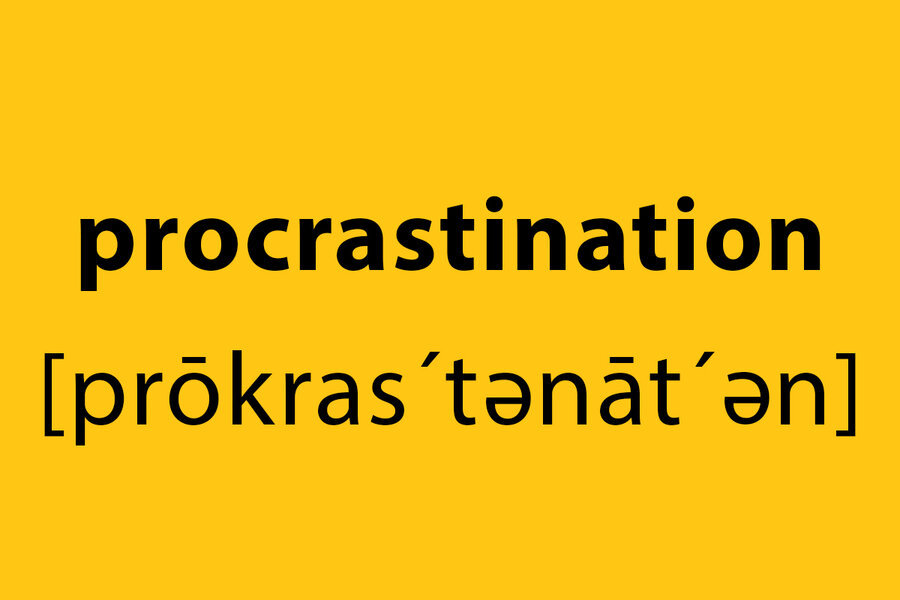 I had an etymological insight when I was playing solitaire on my phone, after getting sucked into pet videos on Instagram and seeing what friends were up to on Facebook. I realized that the Latin word for “tomorrow”– cras – is in the middle of procrastination. That’s what procrastination is – putting something off until tomorrow.

Writers from Cicero onward have warned that putting things off is imprudent. The poet Edward Young declared in 1742 that “procrastination is the thief of time.” Ben Franklin, who also devised an ambitious 13-week plan to achieve “moral perfection,” supposedly advised against it: “Never put off until tomorrow what you can do today.” I have been told by German friends and relatives, “Morgen, morgen, nur nicht heute, sagen alle faulen Leute” (“All the lazy people say, ‘Tomorrow, tomorrow, just not today’”).

Procrastination is often associated with laziness, but it falls somewhere between idleness and the frantic busyness that is often seen as a virtue in American society. Procrastinators are doing something – just not what they had planned or are supposed to be doing. Putting something off can even result in what psychologists call “productive procrastination.” In your efforts to avoid one difficult task, you end up accomplishing another, as when Sir Isaac Newton procrastinated during his alchemy research and discovered calculus.

The word, if not the habit, of procrastination came into English in 1548, but our language is full of words that disparage a state of not working. Being idle was stigmatized in Old English, and today the word has a variety of negative senses: “having no employment,” “not turned to … appropriate use,” “lazy.” Sloth, “disinclination to … labor,” was traditionally one of the seven deadly sins.

The ancient Romans, though they valued busyness and constant activity as much as any modern productivity guru, also had a (mostly) positive word for a time spent not working: otium. This was a period for philosophical discussion, music, art, gardening – things that enrich one’s life but don’t further one’s career. Otium is like procrastination in that it involves doing something that is not work, but differs in that it acknowledges that these things are also worth doing.

English, though, turned otium into otiose, “producing no useful result” or “lacking use or effect”: “Her dramatic monologue was otiose and left the spectators unmoved.”

Does English have a word that captures the positive connotations of otium? Leisure isn’t quite right – it is “free time,” but doesn’t carry the same sense that this time is important.

I’ll think more about this … tomorrow.