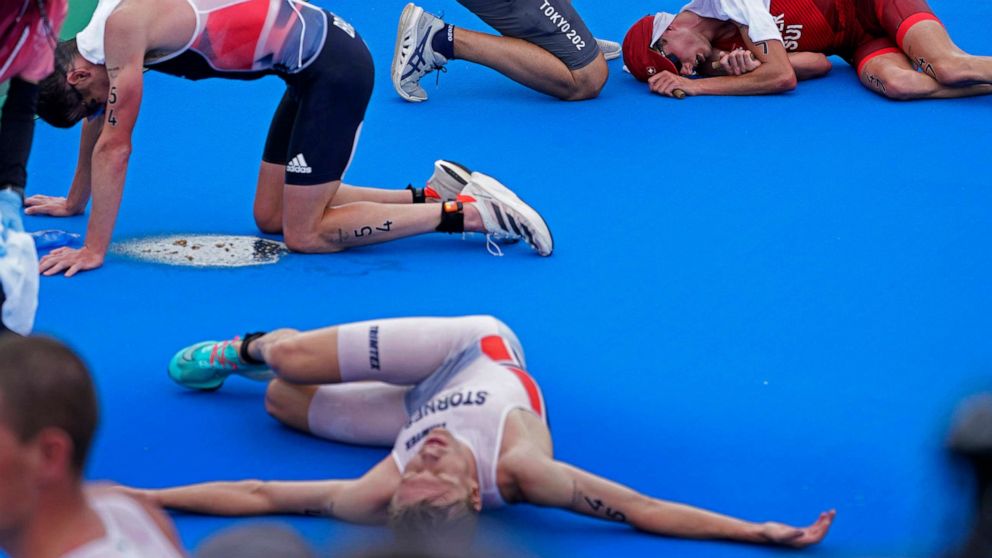 Temperatures in Tokyo over the weekend hit a high of 93 degrees Fahrenheit and athletes have seen no reprieve from the brutal summer humidity in Japan’s capital city. Heading into this week, the Japan Meteorological Agency forecasts a relatively mild Tuesday (with a high of 84 degrees Fahrenheit) with temperatures again topping 90 degrees for the rest of the week.

Athletes reportedly struggled with the scorching temperatures and extreme heat warning signs were posted at some Olympic venues. Several men’s triathlon participants were seen collapsing following the event, including Switzerland’s Max Studer. Russian athlete Svetlana Gomboeva, an archer, was also treated for heat exhaustion after collapsing during competition on Friday.

“It’s very hot but also humid. The hardcourts absorb the heat, it stays trapped in there,” Djokovic said after his first match, according to Reuters. “It was challenging, definitely.”

Djokovic was among the tennis players calling for matches to be moved to the late afternoon to avoid the blazing mid-day heat.

Some skateboarders, meanwhile, complained that the heat at Ariake Urban Sports Park venue was already unbearable at 9 a.m. local time and a distraction from their performances as the sport makes its Olympics debut.

Team USA’s Rugby squads stated last week that they had incorporated extreme heat concerns into their training, practicing in their full rugby uniform kits instead of lighter training apparel to prepare for what it would be like on match days.

“It doesn’t matter how fit you are,” Jon Hood, the head of strength and conditioning for the men’s rugby team, said in a statement. “Heat and humidity change the way we have to train and recover regardless of how physically apt the players are to deal with extreme exertion. It’s a different animal altogether and requires both discipline and mental toughness to stay in the game.”

The oppressive heat is not the only weather concern facing athletes and organizers, as the region also braces for an incoming tropical storm expected to make landfall on Tuesday.

In a statement posted on its website Monday, Tokyo 2020 organizers said the tropical storm is “expected to have limited impact on the Games,” but that any official announcements related to changes in competition schedule would be made on the website and the Tokyo 2020 app.

Tropical Storm Nepartak is forecast to move through the greater Tokyo area in the coming days. As of Monday, the storm was moving at some 18 mph and had maximum wind speeds of approximately 44 mph and maximum wind gust speeds of some 67 mph, according to the Japanese weather agency.

The tropical storm is not forecast to strengthen into a typhoon, according to the World Meteorological Organization, though news outlets and local officials have been labeling it as such.

“The Tokyo 2020 organizing committee is reviewing with the IOC, International Sports Federations and other relevant organizations the measures we should take to protect against [the] Typhoon, which based on the latest weather forecast is likely to make landfall somewhere in the Kanto and or Tohoku regions of eastern Japan Tuesday,” Masa Takaya, a Tokyo 2020 spokesperson, said at a press conference on Sunday.

Rowing and archery events that were scheduled for Tuesday have been rescheduled, but no other changes to events have been made at this time.

Some sports, however, are embracing the weather. The tropical storm is expected to churn large waves for athletes competing in surf competitions, which is making its Olympic debut in Tokyo.