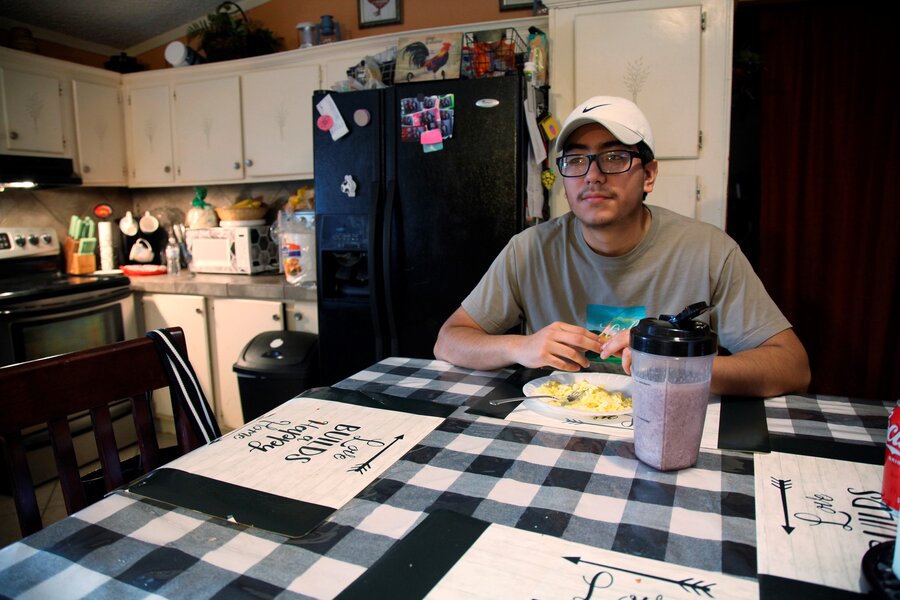 When the text message popped up on his phone, Samuel Alfaro didn’t want to believe it.

It said his appointment with United States immigration services about his application to join the Deferred Action for Childhood Arrivals (DACA) program, the one he had been waiting on for months, was canceled because of a court order halting the Obama-era deportation protections for those brought to the U.S. as children.

“I thought it was a scam,” the 19-year-old from Houston said of the message he received Sunday night, hours before his appointment.

Mr. Alfaro went to the U.S. Citizenship and Immigration Services website and “kept checking it, refreshing it every few hours.” Later, he got an email, confirming it was true.

Mr. Alfaro isn’t the only one. Tens of thousands of young immigrants in the country without legal status are in the same position following a July 16 ruling from a federal judge in Texas that declared DACA illegal while leaving the program intact for existing recipients.

The ruling bars the government from approving any new applications, like that of Mr. Alfaro, whose parents brought him to the U.S. from Mexico when he was 2, along with his older brother. Immigrants and advocates have said they will appeal.

In a statement, Citizenship and Immigration Services said it “will comply with the court order, continue to implement the components of DACA that remain in place.”

It’s the latest twist for the program, which has been struck down and revived in a constant stream of court challenges since then-President Barack Obama created it by executive order in 2012.

Former President Donald Trump announced early on that he was ending the program, but a U.S. Supreme Court decision last year determined that he had not done it properly, bringing it back to life and allowing for new applications like the one from Mr. Alfaro, who filed at the beginning of the year.

The latest ruling calling DACA illegal involved a lawsuit that had been filed by Texas and eight other states. They said Mr. Obama didn’t have the authority to create the program and that it was an action under the power of Congress.

U.S. District Judge Andrew Hanen in Houston agreed, saying in his ruling that “Congress’s clear articulation of laws for removal, lawful presence, and work authorization illustrates a manifest intent to reserve for itself the authority to determine the framework of the nation’s immigration system.”

Immigration attorneys say the court decision has renewed fears about the future of the program and once again puts young immigrants in a precarious position.

Attorney Max Meyers with the Mississippi Center for Justice was gearing up to submit DACA paperwork on behalf of 40 young immigrants last week, most of them first-time applicants. But he had to scrap those plans.

“It really just throws everybody back into uncertainty,” he said. “Rather than people treat people as humans with foundational needs to go to school and be able to get a job, a judge decided that politics is more important in striking this down.”

Advocates were informed that as of last week, Citizenship and Immigration Services had 90,000 new DACA applications pending, according to Astrid Silva, executive director of Dream Big Nevada.

She said the agency received 50,000 applications in the first three months of the year but made decisions on fewer than 1,000.

After the application period opened in December following the Supreme Court decision, Ms. Silva said advocates were patient with the delays, understanding the agency might face a backlog from the coronavirus pandemic or other issues. But as time went on, they started to wonder what might be wrong.

“We started seeing these issues from the get-go,” Ms. Silva said. “We understood COVID and the mail and UPS, and we had an insurrection and it’s Christmas. We were, quite honestly, very patient. I think many of us felt like this was a blessing and we can wait a little bit.”

“For us, the frustration has really been since January,” she said.

Now, the applications have ground to a halt. Ms. Silva said advocates are still encouraging eligible people to apply in the hope their applications will eventually be processed and because having something pending with immigration authorities is better than nothing.

She’s been fielding calls from mothers worried about what this means for their children.

“The applications will literally just be held in a box somewhere,” Ms. Silva said.

Esperanza Avila sent her application about a month ago and presumes it’s among those on hold. While she is counting on the program to help her get a steady job at Home Depot or as a restaurant server while she pursues her nursing degree in Los Angeles, Ms. Avila said she isn’t losing hope.

“We’ve been through this already. They brought down DACA, they brought it back up. It’s just like ups and downs,” she said. “I do think eventually we’ll be OK.”

DACA supporters say Congress needs to approve legislation that would offer permanent protection to young immigrants. The House has passed a measure that would create a pathway to citizenship, but it’s gone nowhere in the Senate. There’s also hope something could be included in budget legislation Democrats want to pass, but it’s unclear if that will happen.

Mr. Alfaro would love to see it. He’s seen the sense of freedom DACA has given his older brother, who initially applied shortly after Mr. Obama proposed it. By the time Mr. Alfaro was eligible, the Trump administration was in charge, and DACA out of reach.

When Mr. Alfaro, the 19-year-old from Houston, submitted his application and hundreds of dollars in fees this year, he thought it was the beginning of a life where he didn’t have to constantly look over his shoulder because he lacks documentation.

“You can get a driver’s license and not be scared to be pulled over,” he said.

Mr. Alfaro looked forward to being able to build a credit score, get a decent-paying job and maybe move out on his own.

He doesn’t know what to do now, other than wait. He’s trying to find optimism to hold on to, like the comments he’s seeing people post online.

“They say that it’ll for sure come back, it’s just a matter of time,” Mr. Alfaro said hopefully.

But, he adds quietly, “the wait, again, it’s stressful.”