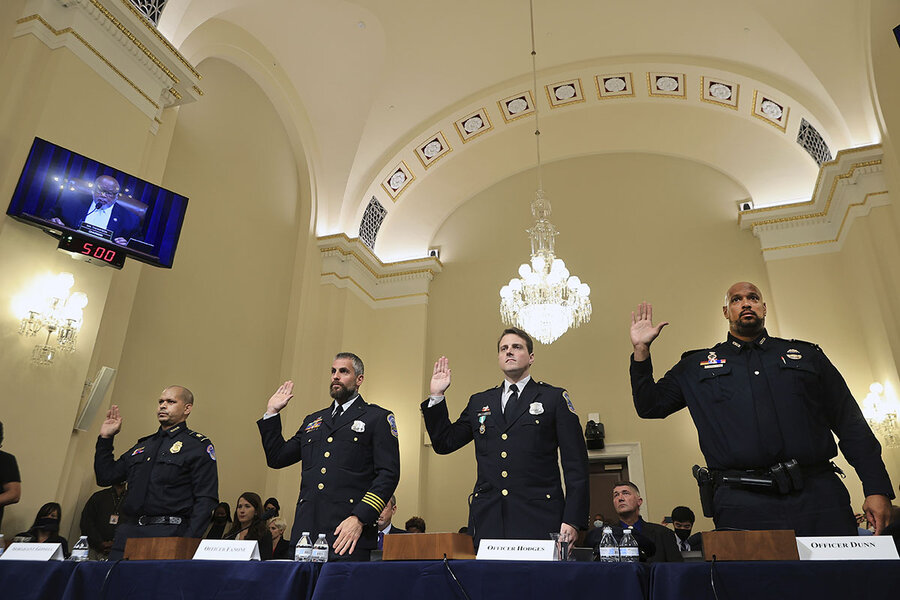 When Capitol Police Officer Daniel Hodges got jammed in a doorway trying to push back a crowd of rioters on Jan. 6 – a moment of agony that later went viral on YouTube – little did he know that two members of Congress were hiding in a small office just 40 paces behind him.

Today, Rep. Stephanie Murphy got to thank him in person.

“You were our last line of defense,” said the Florida Democrat who was escorted to safety while Officer Hodges, helpless as he was, physically prevented protesters from advancing further into the tunnel. “So just a really heartfelt thank-you.”

Can the U.S. rediscover a commitment to the truth? That’s what four police officers – who were beaten, repeatedly shocked, and crushed as they defended the Capitol Jan. 6 – pleaded for in poignant testimony today.

In a relatively intimate hearing room bedecked by chandeliers, Ms. Murphy and the eight other members of a new Jan. 6 congressional committee listened from behind an ornate wooden dais to testimony from four police officers who defended the Capitol that day. After raising their right hands and solemnly swearing to tell the whole truth, they recounted how they and their fellow officers had put their lives on the line as they faced fellow Americans calling them traitors and bludgeoning them with everything from hockey sticks and rebar to flagpoles and even their own riot shields. Though vastly outnumbered, the police were able to push out rioters who had breached a lower entrance to the Capitol and hold their ground, preventing hundreds if not thousands more from entering the building where Congress had been meeting to certify the results of the 2020 election.

“You guys may individually feel a little broken … but you guys won,” said Rep. Adam Kinzinger, a lieutenant colonel in the Air National Guard and one of two Republicans appointed by House Speaker Nancy Pelosi after GOP leadership boycotted the committee. “You know, democracies are not defined by our bad days. We’re defined by how we come back from our bad days.”

Against a backdrop of partisan fighting over how best to get to the bottom of what happened on Jan. 6, the hearing put a spotlight on the police officers’ courage and determination, leaving at least several lawmakers in tears. Other members of Congress in the audience, some of whom were visibly trembling during the hearing, came up afterward to embrace them.

“You held the line,” said Rep. Jamie Raskin of Maryland, one of nine members of the Democrat-run committee. “Now we’ve got to hold the line.”

At one point, the committee played video footage from an officer who was dragged into the crowd while trying to defend the lower entrance.

Officer Michael Fanone, a plainclothes police officer focused on drug traffickers and violent criminals for the Washington, D.C., Metropolitan Police Department, donned his uniform for the first time in a decade on Jan. 6 when he heard the scared tone of Capitol Police officers on the radio. When he arrived, he could tell the frontline officers were beat.

“Who needs a break?” he asked the officers who had been fighting to hold off the crowd for hours. No one volunteered.

But it wasn’t until he reached the lower West Terrace tunnel entrance that he realized the full gravity of the situation.

He described to the committee seeing “terrorists” dressed in Kevlar vests and helmets, some with gas masks – something he realized he should have brought. Many were dressed in clothing with slogans like “Make America Great Again” or “Donald Trump 2020.”

He and others were able to push them back behind the initial threshold, but then he suddenly found himself pulled off the police line and into the crowd. He testified that he heard people yelling, “Kill him with his own gun,” and saw a rioter repeatedly lunging for it. They beat him and stunned him with a taser at the base of his skull several times – until he appealed to their humanity, yelling out that he had kids.

“Fortunately, a few did step in and intervene on my behalf,” he said, noting they assisted him back toward the tunnel entrance as he briefly lost consciousness.

Elsewhere, Sgt. Aquilino Gonell of the Capitol Police, who had spent 545 days in Iraq as an Army soldier, testified he was more afraid on Jan. 6 than he ever had been on his deployment, where he faced frequent insurgent fire, roadside bombs, and the perpetual risk of ambushes. Rioters were calling him a traitor, and shouting that he should be executed, he testified.

It wasn’t until nearly 4:30 p.m., after giving CPR to one of the rioters to try to save her life, that he finally had a chance to let his own family know he was alive. He didn’t get home until 4 a.m., and didn’t manage to sleep much before heading back to the Capitol several hours later – against his wife’s pleas.

As an immigrant from the Dominican Republic who has sworn an oath to uphold the Constitution several times in his career, he underscored that his motive was to protect everyone in the Capitol, regardless of political affiliation.

“When dispatch sends a call, we don’t ask, ‘Hey, by the way, before I treat you, before I take care of you, are you a Republican, Democrat, or independent?” he said. “We just respond.”

But in pointed criticism of former President Donald Trump, GOP leadership, and their supporters, the police officers also expressed their disappointment that their fellow citizens and lawmakers were downplaying the events of Jan. 6.

“I feel that I went to hell and back to protect them and the people in this room, but too many are now telling me that hell doesn’t exist, or that hell wasn’t actually that bad,” said Officer Fanone, who was told he suffered a heart attack during the melee. “The indifference shown to my colleagues was disgraceful!” he shouted, slamming his hand down on the table, startling many in the room.

“Telling the truth shouldn’t be hard,” added the fourth police officer, Harry Dunn, who was called the N-word over and over by the protesters – a memory that he says still hurts.

“Fighting on Jan. 6 – that was hard,” he said, adding that it’s been hard to show up every day since, especially since the protective fence around the Capitol came down recently. He asked lawmakers to show the same kind of courage. “Us four officers, we would do Jan. 6 all over again. We wouldn’t stay home because we knew it was going to happen. … So what I’m asking of you is to get to the bottom of what happened.”