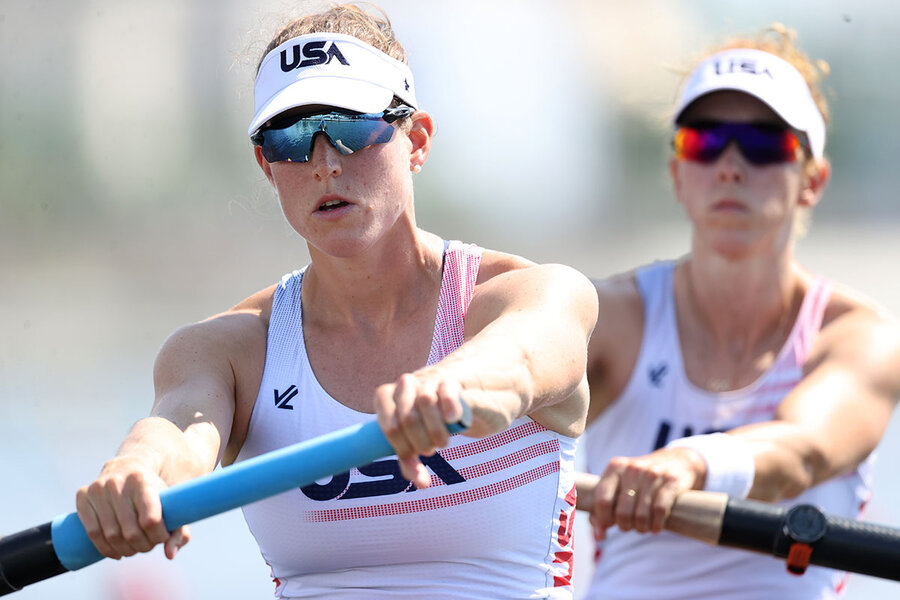 Olympic rower Megan Kalmoe has turned her mother, Mary Martin, into a globetrotter. For more than 15 years, Ms. Martin has followed her daughter across the United States, on nearly 20 international trips and to three Olympic Games. At every major regatta, she’s been there.

That streak ended this year.

As a precaution during the pandemic, the 2020 Tokyo Games are not allowing family members to attend in person. Among a host of other lockdown measures, including a blanket ban on spectators, that one rule may not seem especially burdensome. But community and support are fundamental Olympic values, and families are central to their expression.

Adaptability may be the name of the game for Tokyo Olympics – and not only for the athletes. Parents are finding new ways to support their Olympians.

Trite as it may sound, athletes don’t make it to the Olympics alone. Their first Olympic village is their hometown. Parents are their original trainers, coaches, and chauffeurs. Often, they remain each athlete’s most vocal cheerleaders.

So this year, facing thousands of miles of distance, parents like Ms. Martin are finding workarounds. She’s been texting her daughter for weeks, always trying to sense what will help most in the moment. When the chance comes, they get on the phone.

“Sometimes we talk and I get an earful,” she says. “That’s my job as a parent. Sometimes I can offer advice, and sometimes I just listen.”

Olympians’ ability to persevere is well documented and well praised, particularly during Games struggling to persevere themselves. Yet this year the same challenges forcing athletes to adapt are forcing attentive parents to do the same. They may not be in Tokyo, but through emojis, texts, calls, letters, and long spells of listening, their support is still reaching the Games.

“We’re doing the best we can,” says Caryl Kohler, mother of Kara Kohler, another Olympic rower.

Before Kara Kohler began rowing in college, she wanted one day to qualify for the Games as a swimmer. Ahead of childhood swim meets, she used to watch famous Olympic races and wear a swim cap with the five rings. For her mother, that meant waking up for twilight training sessions, shuttling her daughter to different meets, and then, later, learning her daughter’s entirely new sport.

Ms. Martin’s daughter was also a multisport athlete in high school, but they lived in a small Wisconsin town, and it was hard to see beyond local competition. “Being a parent of an Olympian was not ever really on my radar,” she says.

When it happened, though, she was all in.

Traveling to Beijing for her daughter’s first Olympics was a tutorial on how different it is to watch the Games in person. Transportation can be confusing and food, scarce. The events are spread out, the tickets are limited, and the anxiety is pronounced.

When the race begins and the rest of the audience roars, Ms. Martin instead goes quiet. She scans the large television screen or listens to the announcers, while waiting to catch a glimpse of the one boat that matters most to her.

But an easy cure for nerves is support.

On Independence Day, Ms. Martin and her family, dressed in American flag gear, sent a video chanting “USA!” Ms. Kohler and her family filmed a cheering video of their own and have sent letters of encouragement – and a signed banner to be delivered by the U.S. Olympic Committee.

It’s not the same as being there in person, they acknowledge, but part of parenting an Olympian is trusting her to adapt without them.

For Sharon Hansen, that’s been a lifelong lesson.

Her daughter Dani was born with a condition that limits mobility in her left arm, but Dani Hansen hasn’t viewed it as a disability. “She always just found a way to do things,” says Ms. Hansen.

A multisport athlete in high school, Dani Hansen found rowing in college – and then found out she was really good at it. In 2014, family and friends from her small town of Patterson, California, raised money for a plane ticket to Boston, where the U.S. Paralympic rowing team was holding tryouts. She made the team and later competed at the 2016 Paralympics in Rio de Janeiro, winning silver.

Ahead of this year’s games, hundreds of people from Patterson said they’re writing her letters. Her mother has already sent two, in addition to text messages, emojis shared like inside jokes, and a call whenever possible.

Her daughter always tells her what she needs.

At the time this article was published, Megan Kalmoe and Tracy Eisser had finished second in the coxless pair repechage, and Kara Kohler had placed second in her single sculls quarterfinal. Both boats will be moving on to the semifinals.