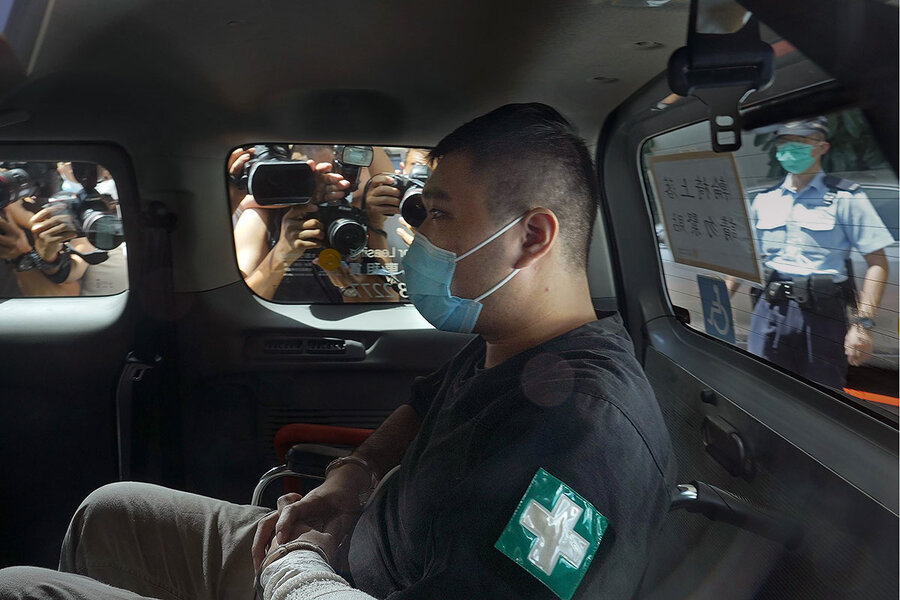 For the last four weeks, a court here has deconstructed the last minutes of a motorcyclist’s defiant downtown ride on July 1, 2020, as thousands of people protested in the streets. His ride ended when he crashed into a police cordon and injured three officers.

For most of the trial, witnesses speculated as to the meaning of the black flag that fluttered from Tong Ying-kit’s motorcycle that read, “Liberate Hong Kong, Revolution of our Time,” a slogan popular during the 2019 protests.

Had Mr. Tong crashed the day before, he might have faced punishment for reckless driving or endangering police. His ride, though, happened on the first day of a new national security law in Hong Kong. Prosecutors subsequently charged him with terrorism and inciting secession. On Tuesday, he was convicted by a court on both counts and now faces a maximum sentence of life in prison.

Hong Kong residents tried and failed to resist the imposition by Beijing of a draconian security law in 2020. The trial of a protester has demonstrated the extent of the law’s stifling of democratic rights.

Mr. Tong’s trial and conviction is just one way this former British colony has changed in the one year since China’s central government in Beijing imposed the national security law. The law’s reach has stunned many residents and human rights activists. Over the last year, Hong Kong officials have arrested more than 100 people and charged more than 60 pro-democracy activists and news executives. The government has expelled lawmakers and frozen the assets of the city’s most prominent independent news company, forcing it to close last month.

The conviction of Mr. Tong indicates how far Hong Kong’s rights of free speech have been curtailed under the security law. While city officials insist that residents are free, activists and organizations face enormous pressure to keep silent.

During the trial, prosecutors told a panel of three judges in the High Court that Mr. Tong broke the law by encouraging people to break from the central government. “He conducted a parade in an area with his political agenda and was inciting others to commit secession,” Anthony Chow, acting deputy director of public prosecutions, said in his closing comments.

The defense presented two witnesses who testified that the slogan on Mr. Tong’s flag, a popular chant by anti-government protesters in 2019, meant different things to different people. As a result, the crowd could have cheered Mr. Tong for reasons that the defendant didn’t necessarily agree with.

“There were a lot of disgruntled people who were demonstrating against the government, the police,” Clive Grossman, Mr. Tong’s attorney, told the court. “They see someone who is obviously ‘with them’ riding on a motorcycle… They think, ‘He’s on our side.’ But ‘our side’ could be a hundred different things.”

In their ruling, the three judges found that the “Liberate Hong Kong” slogan was a “political agenda,” that the defendant knew it was secessionist, and that by displaying the words, he intended to incite others to “separate Hong Kong from China.” What’s more, Mr. Tong’s refusal to stop for police, and the subsequent crash, caused “grave harm to society … with a view to intimidating the public in order to pursue [a] political agenda.”

Even before the trial, the new security law had made clear that decades of demands and organizing to create a democratic Hong Kong after its handover from British rule in 1997 had ended in failure.

With leading critics in jail or exile, the government has restructured the electoral system, making it nearly impossible for Hong Kong’s opposition to win more than a token number of seats. Candidates who seek office will be screened for political loyalties by a pro-Beijing committee of political elites. More than 200 district councilors elected during the 2019 protests recently resigned amid rumors that they could be disqualified – and forced to repay their salaries and office expenses.

Many political parties are barely hanging on, as members quit for fear of being labeled security threats. Future elections will resemble a show “to demonstrate to the others that Hong Kong is still a city where we still have elections,” says Debby Chan, one of the councilors who resigned.

Every pro-democracy activist worries about arrest, she adds. “We are always prepared for the worst.”

Chief Executive Carrie Lam and members of her administration have repeatedly said that the law was needed to bring order and stability to Hong Kong after a year of mass protests and sometimes violent clashes with police. The protests were triggered by a proposed bill that would have allowed for the extradition of criminal suspects to other jurisdictions, including China, that weren’t covered by Hong Kong’s existing treaties. Residents feared China would have demanded the extradition of dissidents and critics to be put on trial there.

During dayslong sieges, protesters hurled homemade explosives and bricks at police who fired tear gas and rubber bullets. Civil servants rallied against the government. Now they have been required to pledge their fealty to Beijing.

The security law worked to improve the city’s “electoral system, halting chaos and restoring order in Hong Kong and implementing ‘patriots administering Hong Kong,’” said John Lee, the secretary for administration on the law’s first anniversary. “While national security is protected, our citizens continue to enjoy freedoms under the law, including freedom of speech, of the press, of assembly, of demonstration, and more.”

A media tycoon is jailed

Scholars say the security law has become a tool for the government to suppress the political opposition, muffle free speech online and in print, and inject fear and apathy into society.

“The government will go to great lengths to turn any crime or mere behavior involving opposition into an [national security law] charge,” says Michael Davis, a legal scholar and former Hong Kong law professor. “It seems from observation that this reflects a zeal to please Beijing.”

Hong Kong’s freewheeling media has been among the targets of this zeal. Last December, the government charged pro-democracy media tycoon Jimmy Lai with collusion with foreign powers to undermine national security. His Apple Daily newspaper, which supported the pro-democracy protests, was forced to close in June after banks were warned not to extend credit to him. Mr. Lai is now serving a 14-month prison sentence after a separate conviction for illegal assembly.

“In one year, the national security law has put Hong Kong on a rapid path to becoming a police state and created a human rights emergency for the people living there,” says Yamini Mishra, Asia-Pacific regional director at Amnesty International.