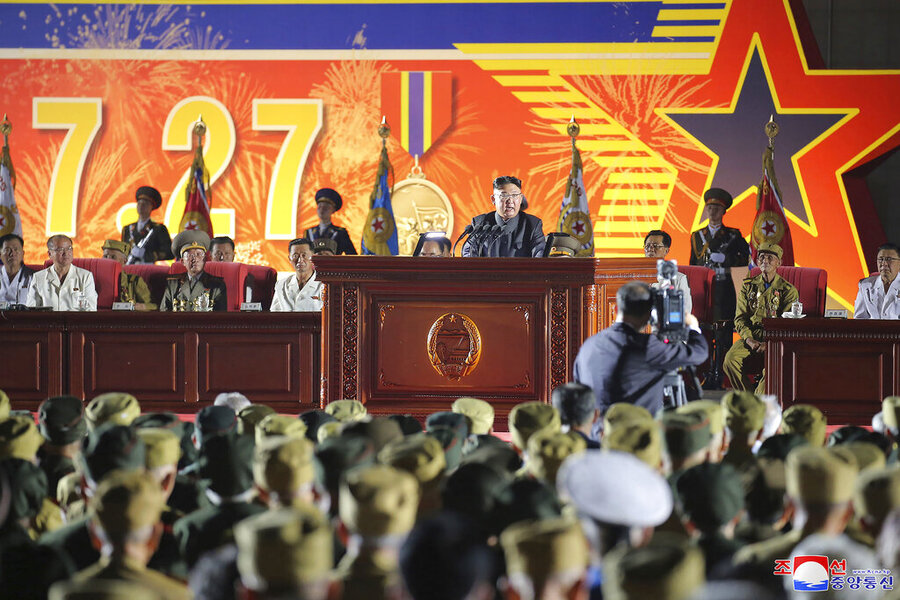 North and South Korea have exchanged messages in communication channels dormant for more than a year and agreed to improve ties – positive steps that still leave any resumption of stalled negotiations to rid the North of its nuclear weapons a long way off.

Liaison officials from the Koreas had several phone conversations Tuesday including one on a military hotline and agreed to resume speaking regularly, Seoul officials said. The rivals use the channels to lay out their positions on issues and even propose broader dialogue, and the links are also critical to preventing any accidental clashes along their disputed sea boundary.

While the renewed communication could help ease tensions across the world’s most heavily fortified border, it’s only a small first step. Pyongyang is unlikely to revive vigorous cooperation programs with Seoul or get back to the nuclear talks led by the United States anytime soon. Some experts say North Korea is instead aiming to improve ties with South Korea in the hopes it will persuade the U.S. to make concessions when nuclear diplomacy with Washington eventually does resume.

Those efforts have been stalled for more than two years amid wrangling over punishing U.S.-led sanctions on the North. During the diplomatic impasse, North Korean leader Kim Jong Un has threatened to enlarge his nuclear arsenal if the U.S. doesn’t abandon its hostile policy, an apparent reference to the sanctions.

On Tuesday, the two Koreas announced their leaders – Mr. Kim and South Korean President Moon Jae-in – have traded personal letters several times since April and decided in those exchanges to resume communication in the channels.

Mr. Moon’s office said the two leaders agreed to “restore mutual confidence and develop their relationships again as soon as possible.” The North’s state media, for its part, said Mr. Kim and Mr. Moon agreed to “make a big stride in recovering the mutual trust and promoting reconciliation by restoring the cutoff inter-Korean communication liaison lines.”

U.N. Secretary-General Antonio Guterres welcomed the announcement of the reopening of communication channels and “fully supports the continued efforts of the parties towards the improvement of their relationship, sustainable peace and complete and verifiable denuclearization of the Korean Peninsula,” U.N. deputy spokesman Farhan Haq said.

Tuesday’s resumption of communication comes on the 68th anniversary of the signing of the armistice that ended the 1950-53 Korean War, which pitted South Korea and U.S.-led U.N. forces against North Korea and China. That armistice has yet to be replaced with a peace treaty, leaving the Korean Peninsula in a technical state of war, with about 28,500 U.S. troops still stationed in South Korea.

In a speech marking the anniversary that North Korea calls V-Day, Mr. Kim vowed to overcome pandemic-related hardships and brace for any changes in the outside political environment. His speech published by state media on Wednesday made no mention of his nuclear program and didn’t contain any harsh rhetoric against Washington and Seoul.

During times of tensions with Seoul and Washington, North Korea occasionally cuts off communication in the channels – by not replying to South Korean phone calls or faxes.

The most recent cutoff came in June of last year after North Korea accused the South of failing to stop activists from floating anti-Pyongyang leaflets across their border. An angry North Korea later blew up an empty, South Korean-built liaison office just north of the countries’ border.

Many experts said the provocative action signaled the North was frustrated that Seoul failed to revive lucrative joint-Korean projects that gave the North badly needed foreign currency and to persuade the U.S. to ease the sanctions.

Those sanctions, together with storms last summer and border shutdowns during the coronavirus pandemic, are battering the isolated North’s economy, creating what Mr. Kim has called its “worst-ever” crisis. Still, outside monitoring groups haven’t seen signs of mass starvation or social chaos in the country of 26 million people.

Nam Sung-wook, a professor at Korea University, said the resumed communication likely won’t lead to a dramatic improvement in ties in the near term – but could pave the way for something down the road.

“North Korea knows it has to sit down for talks with the Biden administration one day. It thinks South Korea still has an effective value … to make Biden move” in a direction that it favors, said Mr. Nam. “North Korea can also build up an [international image] that it’s willing to continue dialogue” with the outside world.

Since taking office in January, the administration of U.S. President Joe Biden has called on North Korea to return to a negotiating table. But last month senior North Korean officials, including Mr. Kim’s powerful sister, dismissed prospects for an early resumption of the talks.

Some experts think North Korea may be compelled to reach out to the U.S. or South Korea if its economic difficulties worsen. By taking steps to improve relations with Seoul now, the North may be preparing for that moment.

Park Won Gon, a professor of North Korea studies at Seoul’s Ewha Womans University, cautioned against reading too much into what the communication channels’ restoration means about the North’s economic difficulties. He cited reports that North Korea is still refusing to receive aid even from China, its major ally, due to worries that aid deliveries could spread the virus.

He said North Korea may be hoping that warming ties will help South Korean liberals who support better ties with the North win next March’s presidential elections.