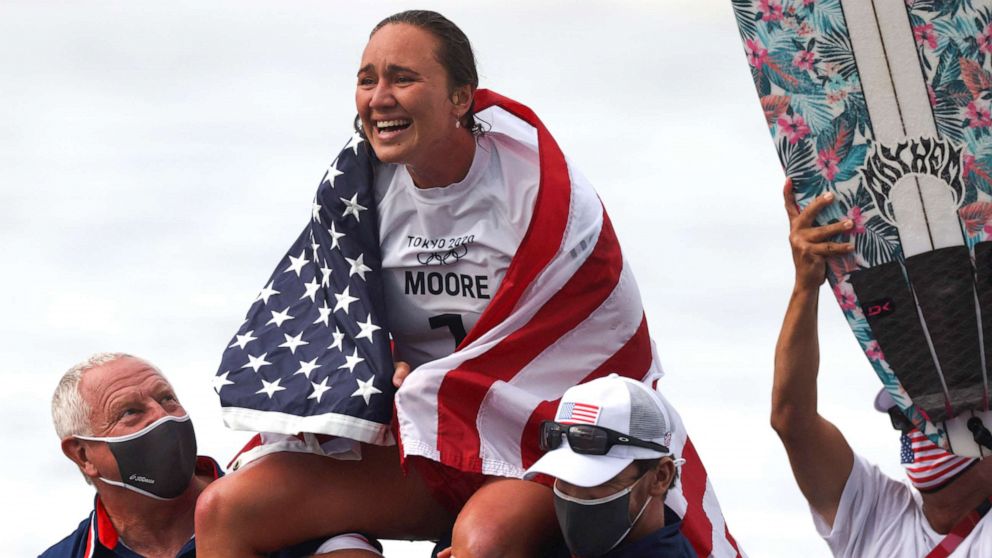 American Carissa Moore grabbed a typhoon by the tail and rode into the history books on Tuesday, becoming the first woman ever to win a gold medal in surfing at the Olympics.

The 28-year-old Hawaiian, the world’s No. 1 ranked woman surfer, burst into tears as she emerged from the water at Japan’s Shidashita Beach following her victorious performance on waves stoked up by Typhoon Nepartak swirling in the Pacific Ocean. She was lifted on the shoulders of Team USA coaches as she wrapped herself in an American flag.

Moore’s win came after she bested South Africa’s Bianca Buitendag in the head-to-head finale of the inaugural surfing event at the Tokyo Games.

A four-time World Surfing League champion, Moore posted a combined score of 14.93 to Buitendag’s 8.46. Buitendag settled for the silver medal and with Moore well ahead of her, left the water early to allow the Olympic champion the spotlight as she surfed to shore to the applause of her teammates and coaches.

Moore was the only member of Team USA to advance to the medal round after winning her heats in the quarterfinals and semifinals.

Her teammate Caroline Marks, 19, of Melbourne Beach, Florida, the sixth-ranked woman’s surfer in the world, was nudged out of the medal round by Japan’s Amuro Tsuzuki, 20, who went on to claim a bronze medal.

On the men’s side, American Kolohe Andino, 27, of San Clemente, California, who holds seven USA Surfing Champion titles, was knocked out of the competition in the quarterfinals by Kanoa Igarashi, 23, of Japan, who went on to win a silver medal.

Owen Wright, 31, of Australia, claimed the bronze medal with an upset win over Gabriel Medina, 27, of Brazil, the No. 1 ranked male surfer in the world.