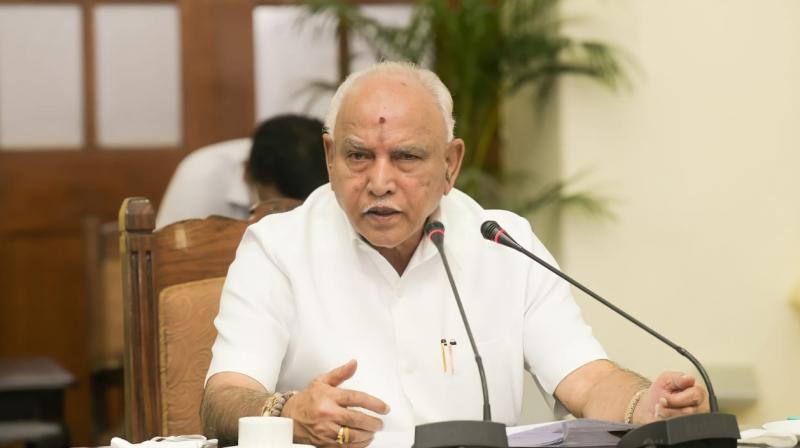 Panaji: Amid speculation about a change of guard in Karnataka, BJP president J P Nadda on Sunday ruled out any leadership crisis in the southern state and said Chief Minister B S Yediyurappa has done good work.

He termed as baseless the Pegasus snooping allegations, and hit out at the opposition parties over it, saying that there was no issue left with them.

Talking to reporters here at the end of his two-day Goa visit, Nadda also said that the BJP would fight the Assembly elections in Goa due early next year under the leadership of Chief Minister Pramod Sawant, but added that a formal decision about it would be taken by the party's parliamentary board.

On Karnataka, he said, "Yediyurappa has done good work. Karnataka is doing well. Yediyurappa is taking care of the things in his own way."

When asked if there is a leadership crisis in the southern state, Nadda said, "That is what you feel. We don't feel so."

Nadda's remarks assume significance as they came hours after the Karnataka CM said he will take an appropriate decision, once he receives directions from the BJP high command this evening, regarding his continuation in the post.

"By evening once it comes, you will also get to know about it, once it comes I will take an appropriate decision," Yediyurappa had said in Belagavi in response to a question whether the directions from the party high command in Delhi were expected today.

Replying to a question over the Pegasus snooping row, Nadda said, It is baselessIt is issueless. The opposition parties led by the Congress do not have any issue which they want to raise for people. That is why they raise this kind of issue."

Last Sunday, an international media consortium had reported that over 300 verified Indian mobile phone numbers, including of two ministers, over 40 journalists, three opposition leaders besides scores of businesspersons and activists in India, could have been targeted for hacking through the Pegasus spyware of the Israeli firm NSO. However, the government has been denying all Opposition allegations in the matter.

Speaking about frequent disruptions in Parliament, Nadda said, "We are ready for all types of discussion, but Congress along with other opposition parties has become disappointed and issueless, and hence resorts to such disruptionsThey do not know what to do. They want to stop Parliament over issueless things.

Responding to another question, Nadda termed the Congress as a rudderless boat.

Nadda, while talking about the upcoming Goa elections, said that he was very happy over the performance of the Pramod Sawant-led government and the ruling BJP in the state.

"Goa has done an all-round development under the leadership of Pramod Sawant," he said.

On asked whether the party will project a fresh chief ministerial face in the next year's election, Nadda said, "We are proceeding under his (Sawant's) leadership. There is no possibility of looking at any other thing…But there is a system in the party that such announcements are done by the Parliamentary Board."

Talking about the MLAs, who had switched over to the BJP from the Congress two years back, Nadda said that all the legislators have assimilated themselves "totally and fully" into the party fold.

From 2017, the BJP has grown and become a formidable force in the state, he asserted.