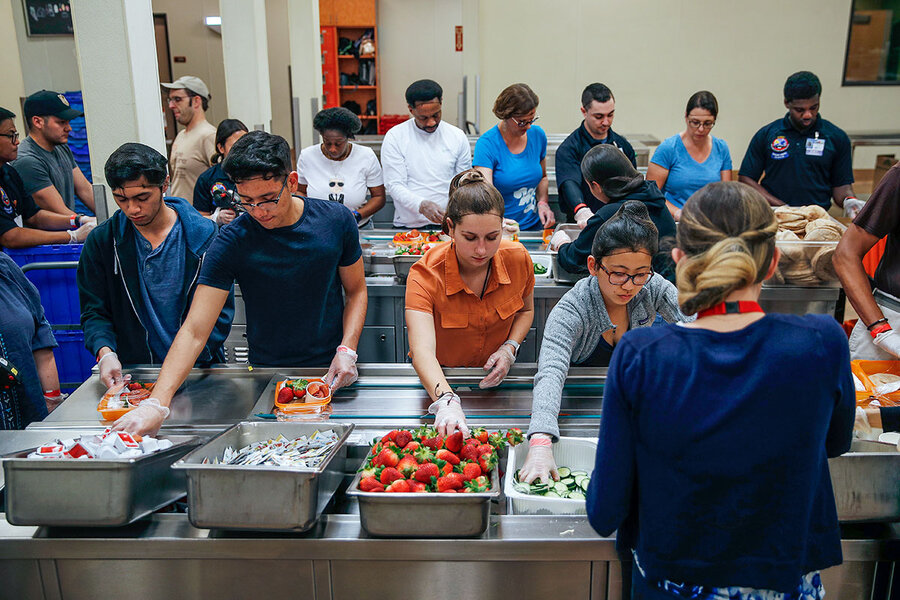 And perhaps most important of all: reduce food waste and loss.

“This year provides a pivotal opportunity for us to get the whole food system discussed more broadly, and food loss and waste raised up the global agenda,” says Liz Goodwin, director of food loss and waste at the World Resources Institute as well as chair of the London Waste and Recycling Board.

Noting that food loss and waste is “not just a developed-world problem,” she says inefficient farm storage systems and supply chains make food loss a critical issue for the developing world’s small farmers.

At the same time, poor food storage systems in developing-world households mean that food waste is far from limited to wealthy-nation kitchens and glittery five-star restaurants.

And then there are the oceans. Currently more than one-third of the world’s fisheries and aquaculture production is wasted every year.

Such statistics and a growing realization that global hunger cannot be ended sustainably with a mind-set of “more” has many experts like Ms. Goodwin hopeful about the food systems summit, slated to run alongside the annual U.N. General Assembly meeting in New York.

The food systems summit will be the culmination of a nearly two-year process leading up to a “pre-summit” taking place in Rome this week – an innovative approach to the well-tread “global summit” format. The Rome meeting is designed to ensure that the September summit at the U.N. results in concrete commitments and plans of action from global leaders.

“The idea of a pre-summit reflects the need for some serious dialogue on this challenge of food security and ending hunger, and how to go about it,” says Jens Rudbeck, a professor of international development at New York University’s Center for Global Affairs and an expert in food security issues.

The conversation on solving global hunger has for decades centered on two basic approaches, he says: First, the need to industrialize food production in developing countries; and more recently, “a second narrative that to solve food security you have to start with small farmers” as well as small-scale fishers, female farmers, and Indigenous people.

The hope is that “the pre-summit can bring those two approaches, and the interests behind them, together to work towards the one goal,” Dr. Rudbeck says. With that sometimes “difficult dialogue” hashed out in Rome, he adds, heads of state may be better prepared to “use the big stage” in New York to make stronger commitments to ending hunger.

Yet if the run-up to this week’s Rome gathering is any indication, the debate between big agriculture and small producers looks likely to rage on past September. Already a number of small-farmer organizations and Indigenous groups chose to boycott the pre-summit and hold their own parallel events.

Still, world leaders and experts now in Rome sound determined to bridge divides and address key issues like food loss and climate adaptation so as to provide a road map to the September summit.

Reflecting on the “national dialogue” her country has undertaken in preparation for the food systems summit, Uruguay’s vice president, Beatriz Argimón, told the pre-summit opening session Monday that a key conclusion for Uruguay was the need to “celebrate and enhance the incredible resilience of women and their key role for the transformation of productive systems.”

National dialogues like Uruguay’s have taken place against the backdrop of a global pandemic that experts say was largely responsible for the addition of as many as 180 million people to a total food-insecure population of about 830 million people – slightly more than 10% of the world’s population.

It was the first significant rise in world hunger since at least 2005, according to the State of the Food Security and Nutrition in the World Report 2021, after five years of basically static numbers that themselves were cause for concern for many experts.

Whether last year’s increase was a “COVID blip” or signals a more long-term rise in global hunger remains unclear, experts say. But NYU’s Dr. Rudbeck says that one thing a half-century of dashed international efforts to end hunger makes clear is that new approaches are necessary – innovations he’s hopeful the food systems summit process will deliver.

“We’ve learned a lot about reducing hunger. We’ve built up a lot of institutional knowledge that has notably helped the World Food Program to become the effective global actor it is. We’ve changed the mind-set of consumers in the developed world about their role” in addressing hunger – notably by reducing food waste – “and we’re getting better at integrating the world’s small producers into the food system.”

But he adds that all of that knowledge and more will be needed to take on hunger in a world of new challenges like accelerating climate change and growing numbers of displaced people.

“These are new worries on top of the challenges to food security we’ve long faced,” he adds. “But if the summit can deliver the message that we have the knowledge to take on these issues and countries are taking steps to use that knowledge, that will be progress.”