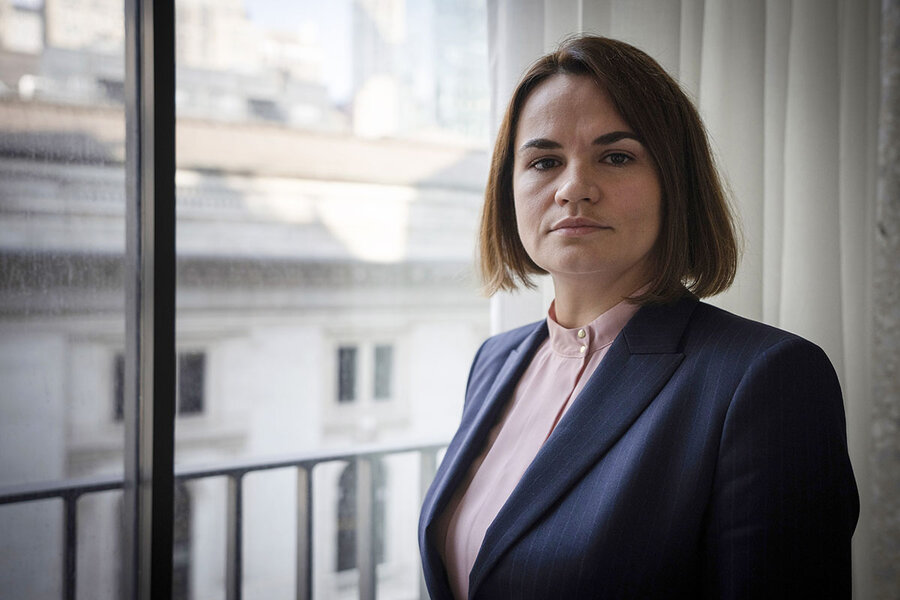 The tweet from @POTUS – President Joe Biden – at 12:34 p.m. Eastern time today came as a total surprise to the outside world.

“I was honored to meet with @Tsihanouskaya at the White House this morning,” the tweet said. “The United States stands with the people of Belarus in their quest for democracy and universal human rights.”

But her requested meeting with President Biden hadn’t come through. In my interview with her last Wednesday, Ms. Tsikhanouskaya was clearly disappointed but said she understood, he’s a busy man. Still, she made clear that he could have made a larger point by meeting with her.

“Since the beginning of his presidency, Joe Biden has declared that now is the struggle between autocracy and democracy,” she said.

Indeed, Mr. Biden regularly speaks of that stark choice, be it regarding China, Russia, North Korea, Cuba, or many other regimes. He has said the battle between democracy and authoritarianism will define our century. He also promised, early in his tenure, to hold a Summit for Democracy, aimed at fighting corruption and authoritarianism, and advancing human rights.

Belarus may seem obscure – a former Soviet republic of 9.5 million people, ruthlessly run by a close ally of President Vladimir Putin. But it’s a key buffer between east and west, Russia and Poland.

So Mr. Biden’s failure to meet with Ms. Tsikhanouskaya last week seemed a missed opportunity. When she left Washington for New York over the weekend, that seemed to be that. She was due to fly to San Francisco first thing today – but suddenly, there she was in the Roosevelt Room of the White House, shaking Mr. Biden’s hand.

According to a senior Biden administration official, Ms. Tsikhanouskaya came back to Washington to see National Security Adviser Jake Sullivan, and the president “briefly dropped by their meeting.” (She had already met with Mr. Sullivan last week.)

The Biden-Tsikhanouskaya meeting was framed as a casual hello, not appearing on the president’s daily schedule and not taking place in the more formal Oval Office. But she got her handshake and her photo op, which will not be lost on Mr. Lukashenko or President Putin.

“Thank you, @POTUS, for a powerful sign of solidarity with millions of fearless Belarusians who are peacefully fighting for their freedom,” her own tweet stated. “Today, Belarus is on the frontline of the battle between democracy and autocracy. The world stands with us. Belarus will be a success story.”