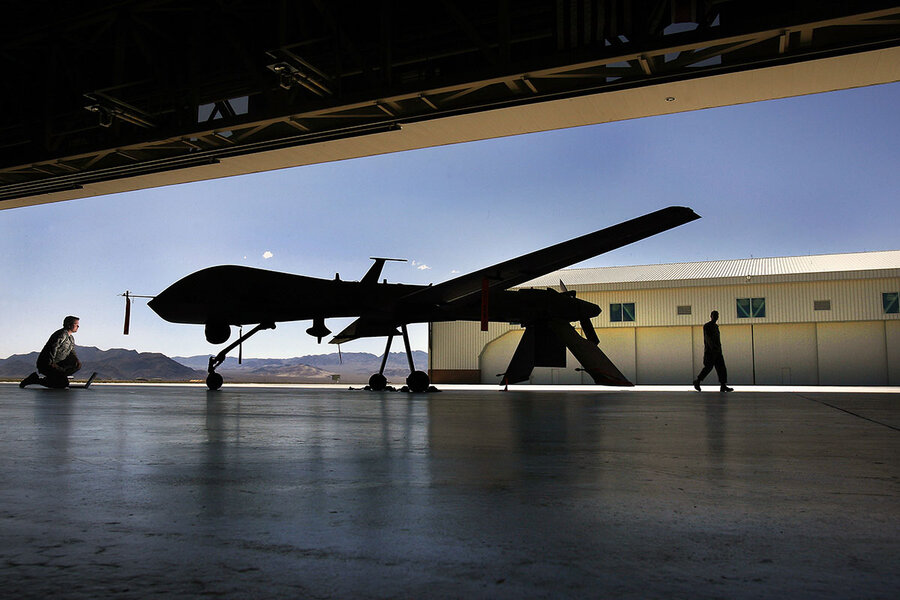 The persistent nature of drones allows us to watch a person for 8 or 24 hours, or for months. Early video monitors for RPAs were grainy – targets looked like blobs, not people. Today, the video feed is really good – you can tell what color shirt they’re wearing. You can see their hand gestures, their gait. It’s almost too good. I don’t know if it needs to be that good.

So you really observe the humanity of this person. You watch guys walking their kids to school and playing with them in the backyard for hours. As one analyst said, there’s no doubt they’ve done nefarious things, but with some there’s also no doubt that they’re good fathers and husbands.

You develop a one-sided intimacy with a person, and then you’re severing that intimacy when you kill them. It’s unlike any other weapon that we’ve deployed before.

And I think it’s important that we recognize that [RPA crews] might be removed from harm’s way, but emotionally and cognitively, they’re there. They’re in that fight.

Q. What are the implications of this kind of warfare?

What struck me about it was that – despite it being described as “video game warfare” – there’s a reluctance sometimes of people who are trained professionals in the military to kill. I actually think it’s refreshing. It should always be difficult to kill another human. I don’t think we want people who have no problems with that. We don’t want psychopaths conducting our combat operations. We want people who are ethical and who follow rules of engagement – who understand the humanity of the target.

Normally the military dehumanizes the target for us to mentally get over that natural resistance humans have to killing each other, but drones have the opposite effect of humanizing the target more.

Q. You mention particular cases in which you found that RPA crews struggle with the killing they do. What are some of those?

Any mission involving accidental civilian casualties. Nothing there surprises me, since we train [troops] on the law of armed conflict and to be an ethical fighting force. But there are instances where we deliberately strike a target knowing there will be civilian casualties, because the person we want to kill is so valuable that we’re willing to accept this. The payoff is supposed to be worth – I’m struggling for right word here – the collateral damage.

Those decisions – depending on how many people we think we’re going to kill – elevate up the chain of command. Some pilots receive a phone call from the president saying, “You’re authorized to strike that target.” There are no other jet pilots or tank commanders who have a direct line to the president. The authority figure takes responsibility for the strike, but the drone crew has to carry it out and live with it.

Another time drone pilots experience negative emotions is anytime a crew can’t prevent a friendly force on the ground from being wounded or killed in action. Regardless of their physical separation from these ground warriors they’ve probably never met – in the way these crews feel intimacy with the target, they also feel an intimacy with those they are protecting. It’s their duty and responsibility, and I think there’s a little bit of survivor guilt in that regard.

Q. In what way does the U.S. military need to reckon with this?

One of the things we can do is to better prepare the people [who are interested in being part of an RPA crew], to tell them it’s a near certainty that you’ll conduct a strike and kill somebody.

It’s also about changing the culture. Pilots value courage. It takes a lot of physical courage to fly a helicopter or jet – you go into harm’s way and you could get shot down or crash. It does not take a lot of physical courage to fly drones. You’re flying from a little box with AC on the other side of the planet, far removed from people who are shooting at you. So there’s a strange dynamic between manned and drone pilots – the military treats [the latter] as less than equal.

Q. You argue, paraphrasing the military philosopher Carl von Clausewitz in his book “On War,” that maybe RPA operators – since they’re not in a “kill or be killed” situation – replace physical courage in the face of personal danger with the moral courage to accept responsibility before the court of their own conscience. How have you seen that playing out?

Anwar al-Awlaki was the first U.S. citizen to be killed by a U.S. drone strike [without trial in the U.S. courts, in an operation ordered in 2011 by President Barack Obama]. I don’t want to debate whether he should’ve been killed or not. [Mr. al-Awlaki, born in New Mexico, was the former imam of a mosque in Falls Church, Virginia, who later joined Al Qaeda and was in Yemen when he was killed.] But this target was assigned to an Air Force drone squadron and they refused to carry it out. The leadership, and the people in the squadron, just flat out said, “We’re not going to kill an American citizen.” That takes a lot of moral courage. Some people were fired as a result. Eventually [the order was sent] to the CIA, and the CIA killed him.

Another story: An Army Grey Eagle pilot told me [his drone] was coming back to base when a commander on the ground requested air support. The commander said, ‘This house right here is your target.’ The pilot went through procedures and fired a missile into the house. Then a man rushed out of the home carrying [an injured] little girl in his arms and hopped in a car. The commander on the ground told the pilot, “OK, your new target is that car.” The pilot said, “Absolutely not. I’m not going to strike that car knowing there’s a wounded little girl in there.” That pilot got a phone call from a general officer saying, “How dare you refuse a request to strike from my ground forces!”

That’s kind of an extension of the soldier’s right to miss, something that Dave Grossman writes about [in “On Killing: The Psychological Cost of Learning to Kill in War and Society”]. Civil War [forensic] historians found soldiers who were killed on the battlefield with several charges still inside their muskets. This meant that when these soldiers would stop to take a knee, they weren’t actually shooting – they were pretending to need to reload.

There’s nothing new in combat in this sense, and I’m proud of some of the decisions that these drone crews are making. It’s not easy.