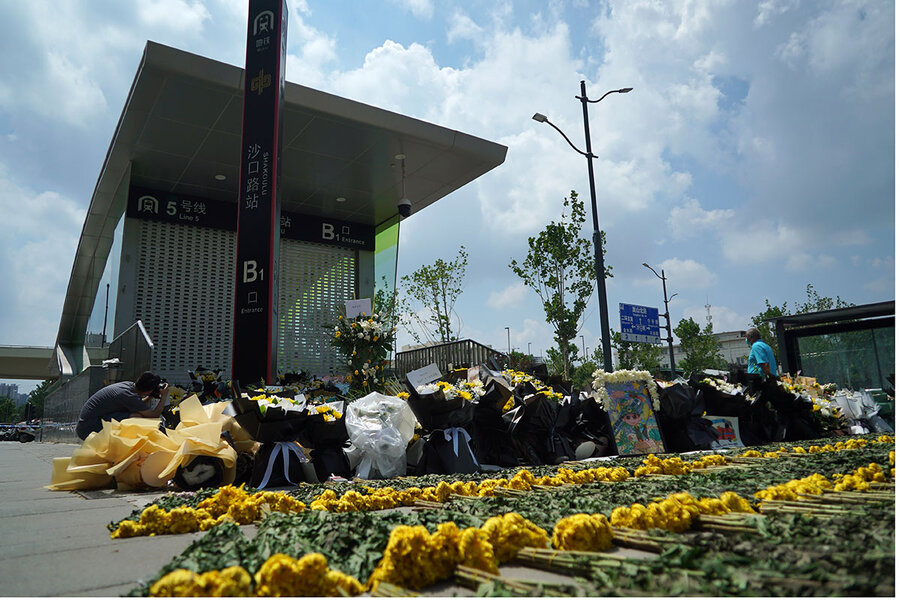 China’s sponge city program aims to use pervious pavements, rain gardens, green roofs, urban wetlands, and other innovations to absorb water during storms. The soil then purifies that water and gradually releases it – much like a sponge. The government has invested more than $12 billion in the program since 2014 to help cities create sponge features on 20% of the land, with the goal of retaining or reusing 80% of annual precipitation by the 2030s. The program is a window into how China is trying to balance the breakneck build-out of urban areas with environmental adaptions that potentially offer a model to other flood-prone nations.

Although Zhengzhou has spent more than $80 million since 2016 to create green belts, permeable roads, and collection wells to reduce flooding from heavy rainfall or overflow from major rivers, the intensity of last week’s rain rapidly submerged the area designed to absorb it. “For this type of rain, the soil will be saturated very, very quickly,” Professor Chan says.

“The sponge city program is good stuff, but it only can withstand the mild or large rainstorm” that comes once in 30 years, he says. The task ahead for China’s government is not to abandon the more sustainable and ecologically friendly approach to absorbing and recycling stormwater, but to pay greater attention to climatic extremes and uncertainty, he says.

Underlying the rising danger of climate change-induced flooding in Chinese cities is the country’s unprecedented urbanization. Since 1978, China’s urban population has expanded fivefold to 900 million – 64% of its population of 1.4 billion people now lives in cities.

As highways, buildings, and other infrastructure pave over land and shrink green space, surface flooding has emerged as the most serious water-related problem in urban China, with floods affecting scores of Chinese cities each year. Urban drainage systems in most Chinese cities are “insufficient to cope with rising urban flood risk” amid climate change, and in July last year more than 20 million city dwellers were hit by floods in 24 provinces, according to a 2020 paper by Chinese scientists.

The problem has also spurred a rethinking of the traditional “gray,” or hardened, flood-control infrastructure predominant in China, which has constructed 97,000 dams since the 1950s. The government’s emphasis on building dams, dikes, and levees to prevent riverine floods has been less effective in ensuring the protection of growing cities on floodplains, especially amid extreme rain, experts say.

“Dams are typically triumphed as flood mitigation tools, but as dams get larger, they tend to complicate flooding controls due to the unpredictability of climate change,” says Kirk Barlow, an Asia-focused staff member of International Rivers, an Oakland, California, nonprofit devoted to protecting rivers. He points to the collapse of two dams in Inner Mongolia from heavy rains in mid-July.

A harmonious relationship with nature

Yu Kongjian, a professor of landscape architecture at Peking University, is credited as the main architect of the sponge city concept. In a 2019 video for the World Economic Forum, he described the previous approach to flood prevention as “totally wrong.”

“We think we can use concrete to channelize the river; we think we can use dikes to protect the city from being flooded and we drain away all the water,” but instead, such structures are causing floods, he says. “Those gray infrastructures are actually killers of the natural system, which we have to depend on for our sustainable future.”

Professor Yu’s sponge city concept promotes a more harmonious relationship between humans and nature that in effect gives water more room to soak in and pool in urban areas – such as parks that are dry in some seasons and become shallow ponds or channels in rainy seasons. “Floods are not enemies; we can make friends with floods,” he says.

But the scale of the rain in Zhengzhou, capital of Henan province on the arid North China Plain, shocked the city and engulfed its sponge features.

Despite red alerts from meteorologists, 12 million residents were still going to work and school as usual when the heaviest rain struck, inundating roads and part of the subway system, where some 500 people were trapped for hours amid rising waters.

Commuters clung to trees and lampposts as rushing, waist-high waters churned through the city; the death toll to date is 73, according to state-run media. The flooding shut down transportation and cut electricity, water, internet, and phone connections in the city and its hinterland, impacting 13 million people and forcing more than 1 million to relocate. About 450,000 acres of crops were wiped out and thousands of pigs and other livestock killed in surrounding farmland in the region known as China’s breadbasket, adding to total economic damages estimated at more than $10 billion.

The incident highlighted how far China has to go to address the problem of waterlogging in cities, experts say.

“It’s quite clear that we need to take this far more seriously. And sometimes it takes kind of a real big disaster for that to happen,” says Ma Jun, director of the Institute of Public and Environmental Affairs in Beijing, noting there was a “gap” in the city management’s response. “We should not waste any crisis and take this as a lesson,” he says. “The whole trend of extreme, heavy rainfall is clear.”

The politics of hydrology

Indeed, as Zhengzhou struggles to recover, the heightened flooding risk is striking a political nerve in China, where since ancient times the ruler’s mandate has been tied to the state’s capacity to “order the waters” by controlling floods, with dynasties falling if they failed to do so.

China’s origin myths center around Yu the Great – founder of the earliest dynasty, the Xia – who according to legend carved out river basins on the North China Plain, where the Yellow River now flows through Zhengzhou.

“Throughout history and in the 20th century, water resource management and flood control are highly political issues” in China, says Sabrina Habich-Sobiegalla of the Institute for Chinese Studies at the Free University of Berlin.

In a reflection of this sensitivity, Chinese leader Xi Jinping issued an “important instruction” on July 21, the day after the Zhengzhou deluge, demanding that authorities prioritize flood prevention, “locate hidden dangers,” and improve the early warning system for rainfall.

On Wednesday, Chinese flood control officials and meteorologists warned that more heavy rainfall, typhoons, and floods are likely in August, including in megacities such as Beijing and Tianjin. They vowed to step up monitoring of rivers and reservoirs and provide early warnings of catastrophic weather to allow for timely evacuations, according to state-run media reports.

As for sponge cities, Professor Chan says targets that the government has set for absorbing water are “very ambitious,” and may ultimately be adjusted. Challenges such as financial constraints and a lack of public participation due to China’s top-down policy approach have slowed implementation, he says.

“Those cities need to find money to keep the plan going, and that is not easy,” he says. “We still need time to improve the effectiveness.”

Still, environmental experts believe the catastrophic rains in Zhengzhou and elsewhere will help raise awareness in China about the growing risks of climate change and the imperative for action. “It’s obviously hit home,” says Mr. Ma. Now, he says, “we need to provide very feasible solutions, and ways for people to join the effort.”