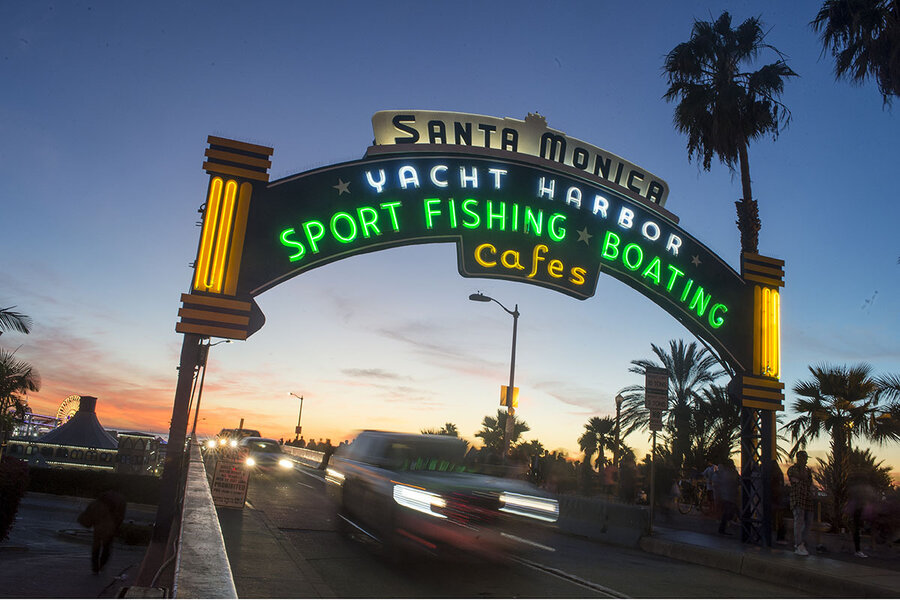 The way Robbie Jones sees it, the big infrastructure projects that reworked the face of her California hometown a half-century ago included a pointed message for minority communities.

During the 1950s and 1960s, whole neighborhoods in Santa Monica were forced to move to make way for what were called urban renewal projects, including a civic center and freeway.

“That whole community, predominantly African American residents, were uprooted, and their homes later … burned to the ground,” the activist and historian told the Thomson Reuters Foundation by phone.

“To me, that was sending a message,” she said, referencing the history of racism across the United States that made Black families feel unwelcome or endangered in certain neighborhoods.

The Santa Monica projects displaced thousands of households, disproportionately affecting communities of color and often paying them too little to relocate in the city, according to a city report.

Now the city is taking steps to redress the generations of trauma that policy caused, approving a pilot project on July 13 aimed at helping those families or their descendants move back to the city by prioritizing them for affordable housing.

“This sets an example of what a community can do – not just talk about longstanding injustices but actually bring the displaced people back,” said Kevin McKeown, the former Santa Monica city council member who spearheaded the proposal.

“When people say they live in an ‘exclusive’ neighborhood, do they think of who has been excluded?” said Mr. McKeown, who retired in June.

The Santa Monica report noted that hundreds of thousands of households were affected by urban renewal projects nationally in the 1950s and 1960s.

The city’s new pilot program will initially be open to 100 families, with applications set to open in the fall, officials said.

Approved applicants will be added to a preference list for affordable housing that the city oversees, said Natasha Guest Kingscote, Santa Monica’s administrator.

“Santa Monica [is] a fairly wealthy city in a very large county, on the coast,” she said. “Our market-rate housing and rents are very high.”

The new category would be placed second on the list behind Santa Monica residents who have lost homes due to various reasons such as natural disaster or closure of a mobile homes park.

Currently, there are about 4,000 people on the waitlist, Ms. Kingscote said, and annually the city is able to offer about half that number of units to people.

While the city does not yet know how many families will apply to the new preference program, Ms. Kingscote and colleagues estimate that at least 2,500 families were affected by the two infrastructure projects.

“This housing displacement pilot doesn’t fix everything, but it’s one more tool in our toolkit of addressing racial justice issues in our community,” she said.

The U.S. Department of Housing and Urban Development did not respond to a request for comment.

The approach Santa Monica is taking, sometimes called a “right to return,” has been garnering increased attention in recent years.

A number of other U.S. cities are looking into similar policies – including Austin, Texas, and Berkeley, California – and a few have programs in place.

Portland, Oregon was likely the first when it created a program in 2014 to address historical displacement that affected over 10,000 African American households, said Steve Messinetti, chief executive of Habitat for Humanity Portland Region, a nonprofit.

The program, backed by millions of dollars, created a “preference policy” that gave priority to families who experienced historical displacement, helping them get into rental units or buy homes in certain parts of the city, he said.

It was sparked by frustration among locals that new investment and development – focused on plans for a high-end grocery store –would not help Black residents or address the housing crisis they were facing, Mr. Messinetti recalled.

While he says the policy has been a “great success,” he cautioned that the challenge now is figuring out how to expand the program from its current geographically restricted focus.

“The only option with these funds is to move to these [targeted] neighborhoods – you can’t buy a house in your own neighborhood,” he noted.

The new national discussion on racial inequity is also leading some local jurisdictions to address land-based historical wrongs on a smaller scale.

Los Angeles County officials, for instance, are preparing to return to descendants of the Bruce family tens of millions of dollars’ worth of beachfront property that had been used as a resort for African Americans.

The city council seized the land in 1924, purportedly to build a park.

Organizers have rallied around the effort as a roadmap for possible reparations in California and a major step toward a nationwide goal of “[attaining] Black Land Back with the hope of closing the generational wealth gap,” according to the Justice for Bruce’s Beach website.

In June, Asheville, North Carolina put an initial $2.1 million into a reparations package that authorities said was an attempt to make up for “an urban renewal program that destroyed multiple, successful Black communities.”

While details on how the money will be spent have yet to be worked out, official documents show the city wants to use the new funding to help create intergenerational wealth through boosted access to housing, job creation, and more.

In Santa Monica, activist Ms. Jones has watched the discussion on the “right to return” with interest.

“There’s nothing wrong with looking back, to use that knowledge of the past to make positive change,” she said.

But while she welcomes the new program, she said the city’s “astronomical” housing prices are threatening to force Black families out all over again, saying even housing that is officially considered affordable is too expensive for many.

“My own son can’t afford to live here in Santa Monica,” she said.

“I love this city, and I’d love for my friends who live here and need housing to have housing – and not have to move out.”