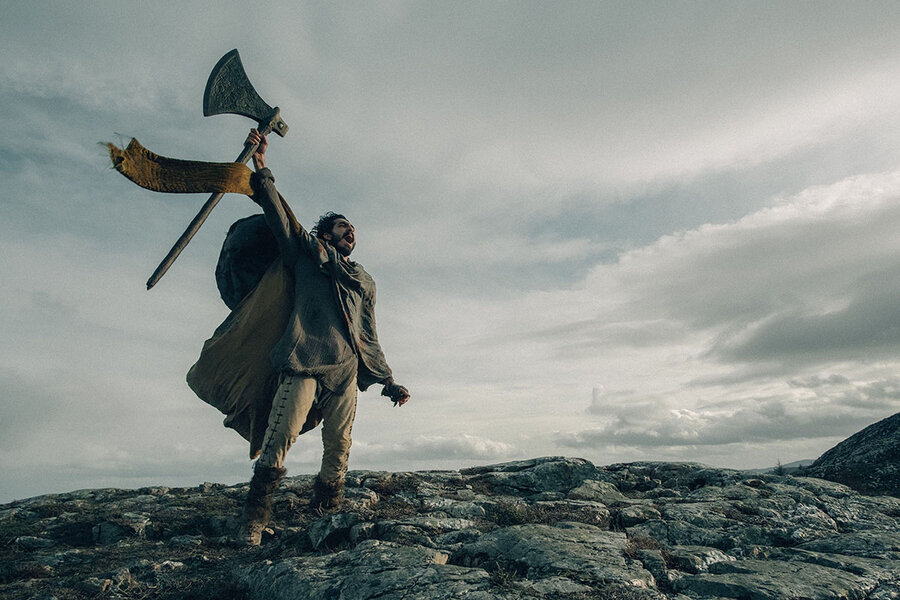 Kneeling in the fantastical Green Knight’s frondescent chapel, Sir Gawain is unflinching as he awaits word on whether he will have to pay the price of his long-awaited honor: his head.

“The Green Knight,” from studio A24, preserves the epic roots of “Sir Gawain and the Green Knight,” a poem drafted in the late 14th century by an unknown author. The movie stars English actor Dev Patel (“Slumdog Millionaire,” “The Personal History of David Copperfield”), who continues to redefine the roles accessible to actors of color with this dive into Camelot.

In a world where men are made through their prolific stories, Gawain is still a boy. He is King Arthur’s nephew, and subject to the medieval code of chivalry, but still the sincere Gawain has no heroic stories to tell. Even with his family’s patience, Gawain’s shame makes him the inevitable victim of an ancient code of manhood: the pursuit of honor at any cost.

What does it mean to live an honorable life? “The Green Knight,” a film based on a medieval Arthurian poem, examines the historical demands of chivalry and the timeless quest for dignity.

The film follows a game initiated by the statuesque, woodland-humanoid Green Knight who barges into Camelot, daring a challenger to humor him in sport. The rules are simple: One man will have the opportunity to inflict any blow on the knight and receive his exquisite ax. In return, however, in one year’s time, he must voyage to the Green Knight’s chapel with the prized ax and suffer the same blow that was dealt.

Desperate for honor, Gawain takes on the green giant’s challenge and doesn’t hesitate; he delivers a clean hit to the creature’s neck. In the midst of onlooker celebration, the Green Knight rises, decapitated. The contract is now initiated and if the knight is true to his word, Gawain must face his destiny in a year’s time.

The film, which doesn’t shy away from its medieval source, fully showcases renditions of the original sexual and violent trials that Gawain faces on his yearlong quest. But they are handled artfully, propelling the story and driving Gawain’s development. Many scenes are not family fare, but the story is compelling for any lover of legendary tales.

While medieval knights might have correlated honor to conquering, slaying, and adherence to chivalric code, the Western world’s once-ironclad mores have morphed into new social pressures. What might one glean from this story about the meaning of honor in 2021, when men are no longer subjected to the weight of knighthood? What is the contemporary definition of honor?

Today, some might call Gawain’s insatiable desire to prove himself to his kingdom a kind of toxic masculinity. While many fall into the trap of that self-induced poison, for the modern person, honor cannot be what it meant to the knights who had kings and queens to deem them worthy. Honor must be about integrity and those critical moments without an audience. Gawain is honorable not because he accepted the Green Knight’s challenge and became a Camelotian celebrity, but because of who he already was.

One thing director and screenwriter David Lowery points to in Gawain’s quest is his unwavering dignity and kindness. Throughout his psychologically grueling trials on the way to the chapel, he gives to those in need, takes risks for the sake of others, and politely avoids conflict. When it comes time for him to keep his promise and fulfill his end of the bargain, where some men might have fled, Gawain does not. Lowery never needed to convince audiences that Gawain was worthy; Patel did all that himself, extracting the dignity that was within Gawain from the beginning.

It wasn’t surrounded by the cheering Knights of the Round Table, or during his year of praise, that Sir Gawain found his honor. It was alone, kneeling with unflinching humility, between the silence of the chapel and the ax of the Green Knight, that he finally discovered the honor nestled within him all along.

“The Green Knight” opens in theaters on July 30. It is rated R for violence and some sexuality and nudity.