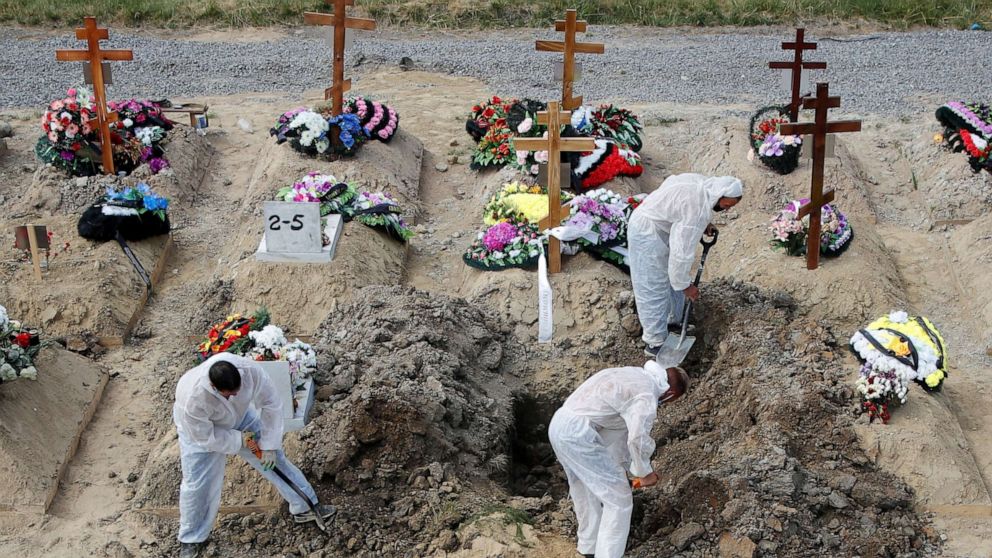 ST. PETERSBURG, Russia — At the start of June, St. Petersburg’s local administration stopped publishing information about how many COVID-19 patients had been hospitalized in the Russian city.

The sudden disappearance of the previously daily reported figures happened to coincide with the opening of one the city‘s most prestigious annual events, the St. Petersburg International Economic Forum.

The forum, a gathering of Russia’s elite and a showcase for its biggest companies, has become a flagship event under President Vladimir Putin. Over five days, 13,000 people were expected to attend the event, where Putin told the audience that life was “gradually returning to its normal routine” after the pandemic.

But the forum was opening just as St. Petersburg was seeing a terrifying surge in COVID-19 cases, as a third wave fueled in part by the delta variant bore down on the country. The last bulletin before the numbers vanished had shown St. Petersburg hospitalizing 500 people a day — a record number and one that meant the city would run out of hospital beds within days.

Journalists and critics of the government quickly started asking if the disappearance of the COVID-19 statistics was connected to holding the forum. St. Petersburg’s administration refused to comment and the latest figures weren’t published again until nearly three weeks later. They were no longer updated daily, either.

“They need to create the impression that everything is OK,” said Boris Vishnevsky, an opposition lawmaker from St. Petersburg’s city assembly, who also opposed holding the forum. “They don’t care about people’s lives and health.”

Throughout the pandemic, Russian authorities have been accused of massaging statistics to hide the real scale of the country’s COVID-19 impact. The Kremlin has repeatedly suggested that although it has been difficult, Russia has fared better than most other countries, even as it has neglected to impose tough lockdown measures.

But publicly available mortality statistics, as well as other data, show an ever growing, yawning gap between Russia’s official COVID-19 figures and what are likely the far larger real numbers. The data suggest the true death toll may already be over a half-million people. Far from doing better than most, the data suggests that, in reality, Russia has suffered one of the deadliest COVID-19 epidemics in the world.

The toll is growing even steeper now as Russia endures a deadly third wave that has remained largely unchecked amid few restrictions and poor vaccination uptake — the latter caused in part by some of the highest levels of vaccine scepticism in the world.

Russia’s official COVID-19 death toll, published by the government’s coronavirus task force, currently stands at around 155,000. In total numbers, that still places Russia fourth in the world, behind only Brazil, India and the United States. But, given the size of the country’s 144 million population and the number of cases it has had, that number appears puzzlingly low.

Almost every country hit by the pandemic has seen a steep increase in total deaths compared to the average. Although some of those extra deaths can be attributed to other causes, such as disruption to health systems, most experts believe the vast majority are COVID-19 deaths.

Russia’s official death toll doesn’t take into account excess deaths, but its national statistics service, Rosstat, has quietly continued to release total mortality data for each month, publishing it in spreadsheets on its website. That has allowed independent demographers and journalists to calculate excess deaths for Russia during the pandemic.

That means Russia has sustained at least 473,000 more deaths during the pandemic than usual, already three times higher than its officially reported toll. That does not yet include June and July, the deadliest months of the current third wave.

“I think that by the end of September, the overall excess mortality will be at least 700,000 people,” said Alexey Raksha, an independent demographer who previously worked at Rosstat. “It is a huge number.”

By proportion of the population, the current figures give Russia the highest death toll of any major country in the world and place it in the top five of any country in the world, behind only Peru, Bulgaria, North Macedonia and Serbia, according to a ranking by The Economist tracking excess deaths globally.

“In November and December of last year, the number of deaths have been record. The biggest in history, in post-war history in Russia,” said Raksha.

Raksha was fired from his job as a demographer at Rosstat last year after he publicly pointed out the discrepancies in the official COVID-19 statistics. He has accused Russian authorities of crudely manipulating the numbers, which he says is visible in the unnatural anomalies in the data released by the country’s coronavirus task force.

He said the sudden plateaus are nicknamed the “Soybanin’s Shelf,” referring to Moscow’s Mayor Sergey Sobyanin. He said they were the result of city officials simply putting a limit on the number of deaths that could be published that day.

“At some point, Sobyanin just ordered not to show more than 75 deaths daily in Moscow. That’s it,” Raksha said.

Russian health officials have previously said they take a more conservative approach to assessing COVID-19 deaths. But that does not explain the vast difference and, at times, officials have acknowledged the real death toll is substantially higher.

In December, Deputy Prime Minister Tatiana Golikova, who oversees the COVID-19 response, acknowledged that around 81% of all excess deaths in Russia were caused by COVID-19. The federal statistics service in June also published an estimate suggesting there had been over 270,000 COVID-19 deaths.

But Russia’s primary official death toll, which is most often used internationally and in state media, has not been updated to match those statements.

A recent investigation by three independent Russian investigative news sites also found evidence that internal government records show it is also concealing the scale of COVID-19 cases in the country by as much as five times.

The government has denied the reports, but issued conflicting responses, saying the database was not accurate and that it also contained vaccination numbers.

Critics have said the efforts to make Russia’s bout with the pandemic appear less deadly are making it worse by discouraging people from taking the virus seriously, which they say also hampers its push to vaccinate. Although Russia’s Sputnik V vaccine has been found to be effective, authorities are struggling to persuade Russians to get it.

With few restrictions in place and still less than 20% of the population fully vaccinated, doctors in the city told ABC News they feared a fourth wave in the autumn was already inevitable.

“Doctors will answer for it, not the government,” said a paramedic in St. Petersburg, who requested anonymity over concerns she could face retaliation.

In St. Petersburg last week, Alexander Yablokov, a 68-year-old soccer manager, said he did not believe the official death toll after he spent three weeks in a COVID-19 hospital. While there, he said he was in a small ward where all but one of seven patients with him died within a week. He said he had pulled his blanket over his head whenever he heard the sound of a gurney coming down the corridor, knowing another of his neighbors had passed.

“I thought I had found myself in a morgue. Not a hospital but a morgue,” he said