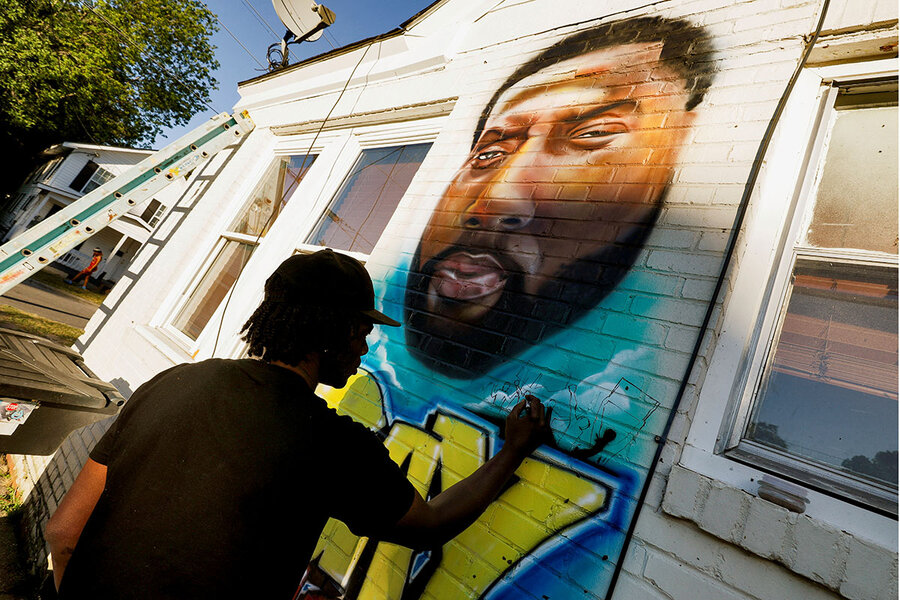 When sheriff’s deputies in coastal North Carolina broke department policy by shooting into a fleeing car, killing the driver, they were justified, the district attorney said. The man killed was a “violent felon,” and the officers felt their lives were threatened, he argued.

But when resident T.J. Selsey saw the truck with heavily armed deputies speed past his house in Elizabeth City on April 21, he had one thought: “Lynch mob.”

Andrew Brown Jr. was killed when deputies serving felony warrants and a search warrant surrounded his car as part of a drug sting. When Mr. Brown, who is Black, attempted to escape in his vehicle, the deputies fired 14 shots, killing him when one hit the back of his head. Mr. Brown was unarmed.

The fractured relationship between police and the Black community today is significantly shaped by how the United States changed its approach to illegal drugs 50 years ago.

The two interpretations of what happened that day point to a fault line that runs through Pasquotank County here and through the nation as a whole. Is America’s war on drugs, now in its 50th year, taking the necessary steps to maintain law and order, or has it warped and overmilitarized policing, with the Black community bearing the brunt of the human cost?

Born of the backlash to the 1960s-era drug counterculture, the war on drugs has since become a primary thrust of modern policing. The bipartisan support of years’ past, however, has crumbled as awareness of incidents such as those involving Mr. Brown have grown. In particular, the no-knock drug raid in Louisville, Kentucky, that killed Breonna Taylor resulted in widespread protests.

Here, the fault line is as obvious as the next election. Sheriff Tommy Wooten, who is white, has stood by the deputies. His challenger, Eddie Graham, who is Black, has pointedly said, “I would have handled [the arrest of Mr. Brown] differently.”

The picture is of a county divided, as the more liberal, minority-dominated Elizabeth City (population 18,000) shifts its values and morals around drug policy and policing away from those of more rural, conservative areas. In that way, Pasquotank County gives a glimpse of the country as a whole, illustrating both stark challenges and glimmers of potential in how communities and local police forces reckon with racially disparate impacts of the drug war.

“Drugs have always been depicted as this extraordinary enemy requiring extraordinary tactics,” says Matthew Pembleton, a historian at American University in Washington. “It’s always been a way to do things differently, … to use tools or force that otherwise could never be justified. It’s true that drugs are a problem with real social consequences. But [dealing with them] has always served as justification for state power.”

Increasingly, however, “there are a lot of things pushing us toward this reassessment of the war on drugs,” he adds.

Rethinking the war on drugs

One of the factors is the opioid epidemic among America’s white, blue collar communities, which has created more empathy for those struggling with addiction. In more affluent communities, recreational drug use has also become less taboo.

Recently, 59% of voters in Oregon voted to decriminalize possession of small quantities of all drugs, even cocaine and heroin. And so-called harm reduction initiatives are replacing incarceration for drug offenders in communities around the United States.

But part of this shift has also been the mounting conviction among many Americans that the war on drugs has done too much damage to minority neighborhoods. Cases like Mr. Brown’s have become rallying points.

“Andrew’s case is tragic, [and] one thing I keep thinking about is the fact that we’ve made it so that drug activity could lead to a death sentence,” says Maritza Perez, director of national affairs at the Drug Policy Alliance in Washington, D.C. “It goes back to the fact that we tend to think about people who are drug-involved as almost less deserving of equal rights and human rights.”

According to the Federal Bureau of Investigation Uniform Crime Report, annual drug-related arrests in the U.S. peaked at nearly 1.9 million in 2006, declining to about 1.5 million by 2019. In 1980, about 580,000 people were arrested on drug charges in the U.S.

After Congress passed stiffer penalties for crack and other drugs, the Black incarceration rate tripled from about 600 per 100,000 people in 1970 to 1,808 by 2000, according to a Prison Policy Institute analysis of Department of Justice data. Black people remain three times more likely to be arrested on a drug charge, even though white people use illicit drugs at roughly equal rates.

Part of the drug war’s momentum inside policing? Its tactics have become baked into how police approach poorer communities.

“The fundamental reorientation [during the war on drugs] of what it was to be a big city or small town police officer was just profound,” says David Farber, a historian at the University of Kansas and author of “Crack: Rock Cocaine, Street Capitalism, and the Decade of Greed.”

Dealing with broader crime problems through a drug lens “turned out to be really effective, because drugs were so ubiquitous,” he says. “It became a naturalized way to police.”

“Now we’re seeing a sea change. But policing hasn’t quite caught up to that yet.”

What happened in Elizabeth City

A clash of those forces took shape on the morning of April 21 on Perry Street, a largely African American neighborhood on Elizabeth City’s west side.

For Mr. Selsey, a Black artist, the raid seemed part of the larger national story. It was carried out the day after a Minneapolis police officer was convicted of murdering George Floyd.

“Taken together with everything else that is going on, that raid seemed like a power play,” he says.

When the local district attorney later called Mr. Brown a “violent felon,” City Councilor Kem Spence was taken aback. Mr. Brown had resisted arrest in the past, but no drugs were found in the April 21 raid. Though an autopsy found small amounts of methamphetamines in Mr. Brown’s blood, it concluded they “likely did not play a role in Mr. Brown’s cause or manner of death.”

With all those complications and nuances, Mr. Spence, who is Black, is grateful for an ongoing investigation of the incident by the U.S. Department of Justice.

“We don’t have the answers to what really happened that day,” he adds. “And, frankly, that scares me.”

None of the deputies involved were fired, but two have resigned, and at least three who opened fire received internal discipline for several department violations, including not having medical care ready nearby and the failure to turn on two of the body cameras on scene.

“While the [district attorney] concluded that no criminal law was violated, this was a terrible and tragic outcome, and we could do better,” Sheriff Wooten said in a recorded statement on May 28. “This should not have happened this way at all. While the deputies did not break the law, we all wish things could have gone different, much differently.”

Several calls to Sheriff Wooten’s office were not returned.

Racial tensions in Pasquotank County aren’t far from the surface. While there is a new Black Lives Matter mural in downtown Elizabeth City, Confederate flags can be seen on the waterfront of nearby Nixonton.

The past two presidential elections have shown a county evenly split, with Donald Trump doing better in 2020 than he did in 2016, losing to Joe Biden by only a few dozen votes.

During recent protests for racial justice in Elizabeth City, Sheriff Wooten pulled his deputies. In a June 23 letter, he criticized the city council, saying that “by the City of Elizabeth City’s continued issuance of permits, they have allowed and encouraged daily protests by a very small group of our community to hinder the lives of our citizens.”

In what many here saw as a tit-for-tat jab, the city council approved the large Black Lives Matter mural for a street within view of the sheriff’s office. The mural was defaced hours after it was completed.

The detective assigned to that case was Mr. Graham, the candidate for sheriff. Thanks to video footage and social media, Mr. Graham found and arrested the alleged perpetrator, who is white.

Mr. Graham, who faced racial epithets the last time he ran for sheriff in 2018, says Mr. Brown’s shooting has brought policing in Elizabeth City to a crossroads.

Fair, decent, and professional police work, he says, is ultimately “a matter of the heart.”

“I am still going to arrest people, and if drugs are against the law, I’ll arrest people for drugs,” says Mr. Graham. “But when I arrest someone, they often seek me out afterwards to talk, because they appreciate how I treat them, and how I basically tell them: “You broke the law, so now there’s some business at the courthouse we have to take care of. Let’s go sort it out.’”

A push to “back the blue”

Tim Hulett has a different view of the situation.

A supporter of Sheriff Wooten, Mr. Hulett is a former drug user who spent time in prison – at one point with Mr. Brown. He says he knows what it’s like to have police pointing guns at him and ordering him to the ground.

He doesn’t blame officers for his plight, only himself. In that way, Mr. Hulett says he can see in his own redemption a need for what he calls a “law and order” outlook that requires strong, effective, and unyielding law enforcement of drug laws. Sheriff Wooten, he says, has provided that kind of policing, and it has, he says, worked: “He’s really cleaned up this town.”

Mr. Hulett has pulled a parade permit for a “Back the Blue” rally on Aug. 7.

“I’m trying to get the people not to rise up in anger, but to wake up, speak up, stand up, show up, because if we do not we’re going to lose this little great reputation that we have in our city from the Outer Banks all the way to Currituck,” says Mr. Hulett.

Other conservatives sense that local policing strategies may have to adjust to a society that seems to be seeing the war on drugs differently.

Pasquotank County Commissioner Sean Lavin, who is white, grew up in a Black neighborhood in Greenville, North Carolina, the son of a teacher and a police officer. He is deeply sympathetic to police, whom he instinctively trusts. But he also wants to see accomplishments by Black residents more prominently acknowledged.

Conversations about the interplay of drug interdiction and race since the killing of Mr. Brown have helped him “realize how very similar we are … despite our different experiences.”

In that way, he says, “I am glad to see the pivot toward understanding the demand side instead of just fighting the cartels, who are just the suppliers, really. I think there’s going to be a lot of evaluation of policies and practices that will come out of any change to legalization of drugs, and any good police department should be doing that anyway, based on what they are seeing.”

St. Louis requires masks for everyone amid rising Covid-19 cases