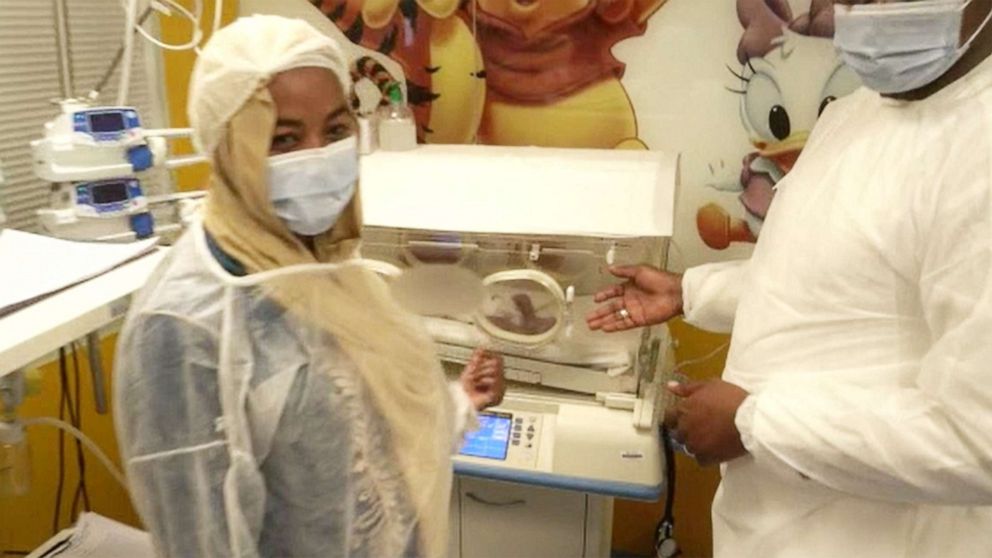 CASABLANCA, Morocco — “I feel very happy to carry my child,” 26 year-old Halima Cissé told ABC News, while holding newborn Muhammad, one of the nine babies to beat the world record for most babies born at one birth.

Cissé, already a mother to a little girl, gave birth to nine children on May 5. “All the children are doing well,” said Dr. El Alaoui, head of the clinic.

The four boys, named Muhammad, Bah, El Hadj and Oumar and five girls — Adama, Hawa, Fatouma, Oumou and Kadidia, are being taken care of at the clinic Ain Borja in Casablanca, Morocco.

Cissé, a 26 year-old student and Abdelkader Arby, a 35 year-old adjudant in the Malian army, say they have always wanted children. ” Everybody wants children … but if they had told me that I, Abdelkader Arby, would one day be the father of nine, I would not have believed it,” he told ABC News.

The parents say the extraordinary birth is a “gift from God,” and said the “responsibility is heavy.”

After a consultation with an OB-GYN revealed that Cissé, was carrying seven fetuses, authorities organized her transfer from Bamako, Mali, to the clinic Ain Borja in Morocco where she received specialized care.

The clinic prepared for the unusual birth of seven , before discovering during the operation two others.

“A lot of things were going through my mind, fear for myself, fear for my kids, how it was going to unfold,” Cissé told ABC News.

El Alaoui, head of the clinic Ain Borja, told ABC News that they tried to postpone the birth as long as they could to keep the babies’ chances high.

Cissé, who nearly lost her life due to blood loss and had to be operated on after the delivery, spent a month at the clinic on her back before the birth. She describes the difficult nights when she couldn’t sleep on the side until the day of birth, at 30 weeks pregnant.

“We thought, if we manage to save four, five children it’s already not bad,” said El Alaoui.

The birth of nine children is an extremely rare phenomenon. Only two others were recorded so far, in Australia in 1971 and in Malaysia in 1999. But Cissé’s is the the first example of nonuplets born alive.

Soumia Arkoubi, head nurse at the clinic, said “they take care of [the nonuplets] like it’s our own children” and that “it will be hard to see them go.”

With diapers changed every three hours at the clinic, the nine bundles of joy go through nearly 75 diapers a day and 100 bottles of milk.

However, according to the parents and the medical staff at Ain Borja, Cissé’s children were conceived naturally.

The children were all born prematurely, the smallest weighing only one pound at birth.

They will have to stay in the neonatal care at the clinic for at least another month before they can hope to meet their big sister in Mali.