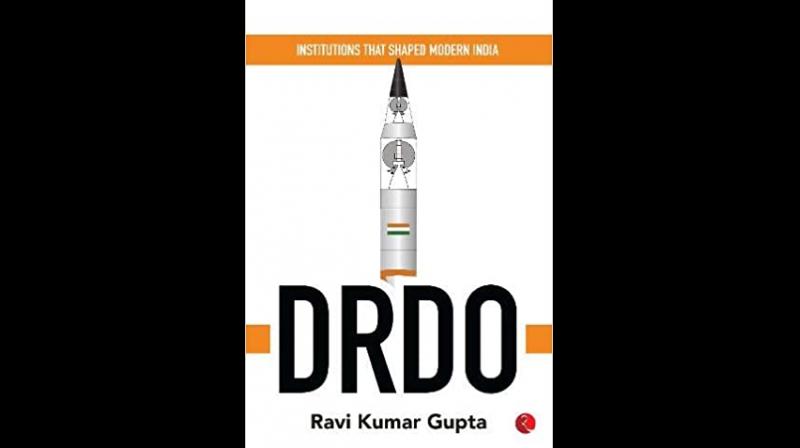 The process of evolution of India’s Defence Research and Development Organisation (DRDO) is unusual, to say the least. This book may not be the first on DRDO, but it is certainly the first to be written by one of its seasoned scientists, who also headed its public interface. Either way, it is welcome as it recounts events and personalities involved in the decades long process of DRDO’s evolution, providing interesting insights into India’s officialdom related to the Armed Forces and external security.

The author begins with a glimpse of historic Indian temples which are architectural wonders to prove what the capabilities of Indians were in those times including the applications of advanced technologies in warfare known to Indians since time immemorial but which were systematically rejected by most scholars of Western origin and many Indians influenced by the West as merely mythological. Centuries before British rule, India was subjected to large-scale destruction of its material wealth, cities, seats of learning, traditional knowledge, culture and traditions. Yet, there is much material evidence of high levels of understanding of science and technology and its applications in India’s archaeological finds like Dwarka, Sanauli, Mehrgarh and Hampi; the advanced architecture of Khajuraho, Helebeedu, Modhera, Virupaksha and Meenakshi temples; the caves of Ajanta, Ellora, Elephanta and the grand 32-metre-high Kailash temple at Ellora carved and chiselled out of a single rock; the metallurgy of the Ashokan pillar and other structures and weapons/cannons and detailed descriptions of plastic surgery and related medical procedures, all of which indicate that the Indian society has been technologically far more advanced than generally viewed through the prism of Western/leftist historians.

And yet, India’s first Prime Minister Jawaharlal Nehru invited Prof. P.M.S. Blackett of Manchester University to get advice about setting up defence research and development in India. It was Blackett, who, whatever his recommendations, became the cause of a decade-long delay in formation of the DRDO.
In May 1948, Professor Daulat Singh Kothari, University of Delhi, very reluctantly accepted the post of the scientific advisor to the Ministry of Defence at persistent insistence from Nehru.

The Defence Science Organisation, formed in 1956 for initiating studies and development of futuristic weapon systems, was headed by Dr B.N. Singh who formed the special weapon development team (SWDT) for study and development of guided missiles at Metcalfe House, Delhi. He worked on the first generation of anti-tank missiles for gaining developmental experience. SWDT later became the Defence Research and Development Laboratory (DRDL) at old Ahmed Manzil, Hyderabad in June 1962 under Gp Capt V. Ganesan as its director. The DRDL of DRDO is now part of what has been named as Dr APJ Abdul Kalam Missile Complex.

Following the tenure of India’s first Defence Minister, Baldev Singh, from September 1946 till May1952, there was no full-time cabinet rank defence minister till April 1957 when V.K. Krishna Menon was appointed for this important post. The author avers that notwithstanding the many controversies, including meddling with the Army’s leadership and making a mess jointly with Nehru of dealing with China that had led to his being expelled by Nehru immediately after the   Chinese Aggression, Mr Menon deserves to be remembered for his major contributions in promoting defence R&D and production.

The book reveals how DRDO’s growth/progress was hampered by bureaucratic apathy and politico-bureaucratic aims which often resulted in DRDO’s innovative projects being dumped so that the required weapon/system could be imported with large kickbacks.

Considering the problems India faced for decades in modernizing/replenishing its conventional weapons arsenal, thanks to politico-bureaucratic apathy and the sanctions/obstacles faced in reaching the Missile Technology Control Regime (MTCR) status, its achievements in the field of missile and satellite technology are commendable.

Astra (missile) and Dhanush (launcher) have been written about in the Mahabharata. Rockets and missiles were used by in India in the 18th century, during the period of Hyder Ali and Tipu Sultan. Rocket artillery brigades were used against infantry formations for mass attacks. With such a huge force, Tipu Sultan defended the Mysore kingdom against the British until his death in Srirangapatnam in 1799. Two of the rockets, captured by the British at Srirangapatnam, are displayed in London’s Royal Artillery Museum. Even Marathas used rockets in the 1761 Battle of Panipat. Indian rocketry, which ended after Tipu Sultan’s death, was revived in the 1970s by Dr Vikram Sarabhai and Dr A.P.J. Abdul Kalam, among others.

After many decades of problems and failures outweighing achievements, since the past few years the trend changed and there has been a steady rate of needful requirements/improvements in weapons and equipment as well as some praiseworthy projects covering medicines, food processing and improvement in living conditions in extremely challenging terrain and temperature. For the Western world, till World World War II, Alps at 8000 feet were considered the highest and coldest and Alpine became the term for categories of weapons, equipment and clothing. Since 1947, Indian Army redefined mountain warfare by fighting at and even transporting battle tanks to 14,000 feet in the Himalayas.

Today, Himalayan heights for Indian armed forces deployment and battle are up to 22,000 feet. DRDO has made some commendable contributions to ameliorate conditions for our troops deployed at almost thrice the Alpine height.

While the book is a useful reference piece and should be read by all related to national security, defence industry and the military technology, students, historians and other readers may find it engaging.

Join us on Google News to keep up to date with the latest news
Tags
book review defence research and development organisation (drdo) institutions that shaped modern india: drdo

Delta not specifically targeting children: WHO