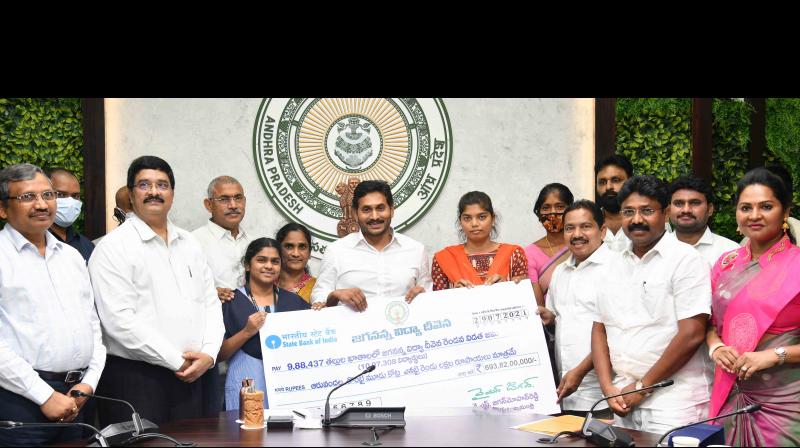 VIJAYAWADA: Chief Minister Y.S. Jagan Mohan Reddy disbursed Rs 693.81 crore to 10.97 lakh students under the second tranche of Jagananna Vidya Deevena. The Chief Minister said that education is the only property that could be given to children, which was why he was extending 100 per cent fee reimbursement.

Reddy said that a total of Rs 26,677 crore was spent on education under Amma Vodi, Vidya Kanuka and Nadu-Nedu. It spent Rs 5,573 crore through Vidya Deevena since 2019, besides clearing Rs 1,880 crore that was left pending dues by the previous government. He pointed out that according to the 2011 census, there is 33 per cent illiteracy in Andhra Pradesh while the national average is 27 per cent. Drawing comparison with BRICS nations with regard to students' enrollment for higher studies, he said it was 51.8 per cent in Brazil, 83.4 per cent in Russia, 83.4 per cent in China but only 27 per cent in India , where 73 per cent do not even join colleges.

The Chief Minister said that to ensure that no family runs into debts for the sake of providing education to their children, the State government has rolled out schemes like Jagananna Amma Vodi, Goru Mudha, Vidya Kanuka, and Vasati Deevena. Overall, Rs 26,677 crore has been on education alone, he said.

Pegasus is not a privacy issue, it’s treason: Rahul