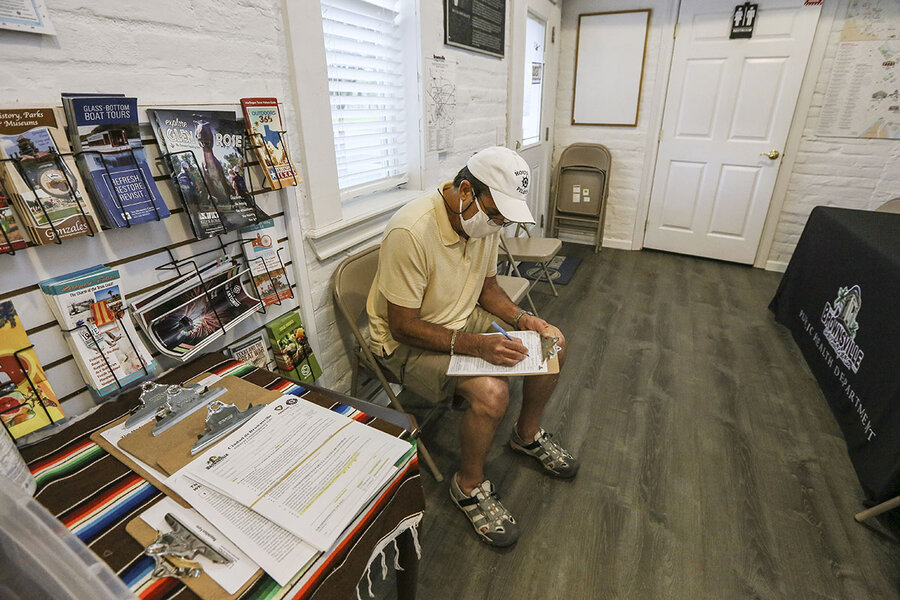 American attitudes toward COVID-19 vaccinations may be slowly shifting toward more widespread acceptance as coronavirus cases surge in some states and officials from the White House to many statehouses urge holdouts to get a shot.

That’s seen in the fact that some of the U.S. areas most resistant to vaccines in the past now lead the nation in the number of people getting their first shot of the two-shot vaccine regimen. Louisiana, for instance, has the fourth-lowest vaccination rate among states, but in recent days has seen vaccinations rise to their highest rate since April, according to Centers for Disease Control and Prevention numbers.

Experts say it’s possible that a new pro-vaccination push by some GOP leaders changed some minds in the least vaccinated portions of the country, which tend to be conservative. Rep. Steve Scalise of Louisiana, No. 2 in the House Republican leadership, publicly got his first vaccine shot earlier this month, for instance.

The United States has been largely drawn into two camps with starkly different views of vaccines and the pandemic. But there is evidence that thought is shifting in areas that have so far been wary.

But it’s more likely that the increases are due to a variety of factors, including worry about the deteriorating health situation in states with a high rate of unvaccinated people, and the urging of family, friends, and medical providers.

Edgar Navarro Garza is a pediatrician at a community health center in Killeen, Texas, that focuses on Medicaid families. He says that in the past few months, as COVID-19 cases have surged in the region, he’s seen an increase in people saying they’re going to get the coronavirus vaccine.

He estimates that 85% of his patient population has been or will soon be vaccinated, including parents and children over age 12.

“They’re really into getting the vaccine,” he says.

Currently, about 31% of Americans over age 18 remain unvaccinated. That means the U.S. remains just short of the goal President Joe Biden wanted to reach by July 4: 70% of the adult population vaccinated.

Meanwhile, the vaccination rate has plummeted since its peak. In mid-July Americans were receiving an average of about 540,000 vaccine doses a day – an 84% decrease from its early April high, according to a database compiled by The New York Times.

With the national case count rising, masks returning in many communities, and the promise of an end to the pandemic appearing to recede, anger is rising among the vaccinated as they blame vaccine hesitance for the backsliding.

Vaccinated and unvaccinated people can seem to live in two different worlds – even when they’re from the same family. Take San Antonio resident Dakota Flores, who is vaccinated, and her adult daughter Patience Flores-Lopez, also of San Antonio, who is not.

Ms. Flores got her first shot as soon as she could, on April 15. She says she acted because she and some other family members have conditions that could make them particularly vulnerable.

“I was hoping we were going to get back to normal,” she says. “And then the new [delta] strain started coming out, and something just told me this isn’t over.”

Too many people aren’t taking the resurgence seriously, she says. Recently she and her two younger children took a vacation and flew to the East Coast. On the plane they wore masks and did not take them off, even to drink water or eat snacks.

They visited a family who was not vaccinated. After they returned, they discovered that members of that family had tested positive for the virus.

The unvaccinated peeve her, she says. They don’t understand what’s going on until COVID-19 hits home.

“You choose to play with everyone else’s life. That’s the way I see it,” says Ms. Flores.

Meanwhile, her daughter, who gave birth during the pandemic, says she does not think she is going to get vaccinated.

“I just believe that there’s no way they could find a cure in such a short amount of time,” she says.

She says that she has a friend who was vaccinated and still caught the virus.

“What’s the point of the vaccine if it’s supposed to keep us safe [but it’s not]?” says Ms. Flores-Lopez, who also worries about a rare side effect with the Johnson & Johnson virus that led to a handful of deaths this spring.

She says she and her mother haven’t really talked about why she’s been hesitant, but her mom knows they don’t see eye to eye. Still – and perhaps importantly – she does not completely close the door on the possibility that she might change her mind.

“I do still think about maybe getting the vaccine. But I don’t think if they ever came up with a way for children to get it, I don’t think I’d let my daughter get it,” she says.

It’s extremely difficult to get those who are adamant about refusing vaccines to change their minds, say experts. According to a Kaiser Family Foundation poll from May, this “definitely not” group is about 13% of the U.S. adult population.

But there is also a group of Americans who admit they’ve entertained the idea they might do it. That “wait and see” group is about 12% of U.S. adults, and the group most likely to listen to the Biden administration’s pleas. Members of this group tend to be less Republican, more diverse, lower-income, and younger than the “definitely not” cohort.

“The most promising thing by far is to help people act” on their own intentions, says Noel Brewer, a professor in the department of health behavior at the University of North Carolina’s Gillings School of Global Public Health.

Research shows that interventions aimed at changing people’s thoughts and feelings are unlikely to work.

Changing behaviors is different, though. Offering a day off work or transportation to vaccination sites or $100 payments – as President Biden is promoting – is often enough to motivate some people.

Unsurprisingly, mandates work as well. The administration’s order for new vaccine rules for federal workers – get vaccinated, or face regular testing – could be a harbinger of more such moves to come.

Overall, says Dr. Brewer, “vaccinations are picking up; governments are using some new programs we haven’t seen before.”

Attitudes toward the vaccines have been fundamentally political since they first became available. To some extent they remain so: A recent Morning Consult poll showed 28% of Republicans remain unwilling to be vaccinated, with another 12% uncertain.

Some loud voices in the GOP remain anti-vaccine, but a number of prominent Republican leaders in recent days have stepped up public endorsements of the shots, notably Senate Majority Leader Mitch McConnell, who is running ads in Kentucky urging people to get vaccinated. Florida Gov. Ron DeSantis said on July 13 that “these vaccines are saving lives.”

Politicization of the vaccine is “slowly fading,” says Professor Brewer, pointing to the fact that more than 50% of Republicans have now had at least one shot.

But there are still many who remain adamant about opting out, such as Brian Holzmeier, who lives outside Fort Worth, Texas.

It’s not as though he’s a “pandemic denier,” Mr. Holzmeier says. He’s known about a dozen people who have been diagnosed, and some who died. Last March, he was just as anxious as the next person, as a steady drip of reports described the nation’s collective concern.

But Mr. Holzmeier’s opinion on the pandemic is that it didn’t turn out to be as dangerous as advertised.

“While it was bad, and it was way worse in some areas, I don’t think it turned out to be what it could have been,” Mr. Holzmeier says.

“The day [Texas Gov. Greg Abbott] shut the state down – and I agreed with that short term – I wrote a check that morning for five figures to buy my wife her own business. It was lockdown at 1 o’clock. It hurt me in the pocketbook,” he adds.

Meanwhile, Conroe, Texas, resident Carol Greenwade thought her life was speeding back up after she was vaccinated. Ms. Greenwade has a medical condition that could make her susceptible to the virus, and takes care of her elderly mother.

Then, a couple of weeks ago, she became a breakthrough COVID-19 patient.

Dealing with the virus so far has been difficult, she says.

But it has convinced some of those around her to change their minds.

“A lot of other family members that haven’t gotten the vaccine, I think they’re going to get it now,” Ms. Greenwade says.

‘Made in America’ company creates fashionable bags out of recycled sails

With moratorium lifting, can US avoid avalanche of evictions?