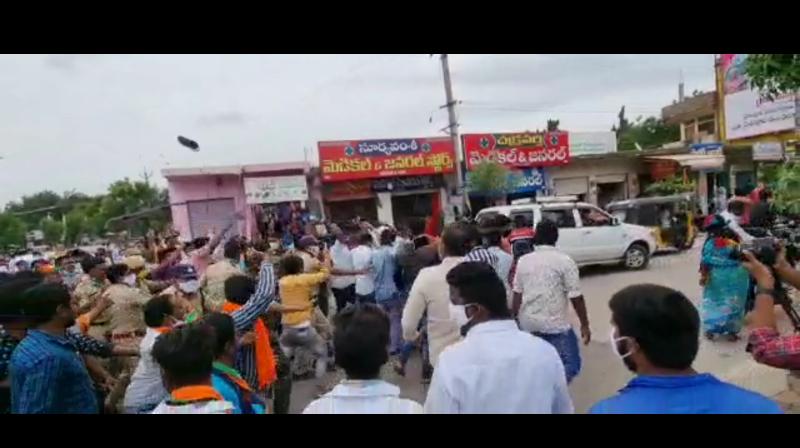 Karimnagar: Activists of the TRS and the BJP threw footwear at each other at the Ambedkar chowrasta in Huzurabad of Karimnagar district on Thursday, over certain remarks attributed to BJP leader Etala Rajendar’s brother-in-law Madhusudhan.

The issue was an alleged social media post reportedly made by Madhusudhan, the brother of Rajendar’s wife Jamuna, insulting people belonging to the SC communities.

Both parties competed with each other to take out rallies on the issue. TRS activists burnt effigies of Rajendar and the wall clocks which were presented by Rajendar’s followers to people in the constituency.

BJP activists took out a rally with the effigy of Chief Minister K. Chandrasekhar Rao and alleged that that the social media post was a fake and the handiwork of TRS leaders.

Both TRS and BJP leaders reached Ambedkar chowrasta, and began raising slogans against each other. Suddenly, some persons in the two groups began throwing slippers at each other.

The police who saw the situation deteroirating stepped in and managed to separate the activists.

Representatives of Dalita Sangham demanded that the government lodge a complaint against the family members of Etala Rajendar for insulting Dalits. Jamuna, the wife of Rajendar, strongly counter them saying that the social media post did not begin to her brother.

Later, Naresh, Etala Rajendar’s personal assistant, lodged a complaint with the police alleging that TRS leaders were deliberately provoking the people of the Dalit community against the BJP leader.