Greetings, homemade radio amateurs!
Radio-controlled cars are quite popular among children and adolescents, as well as adults, in whose heads childhood still plays. Within a certain radius, all the movements of a toy vehicle can be controlled from the remote control, which creates a lot of excitement and interest, however, such factory-made toys are sometimes not cheap, and cheap models either have extremely low quality or functionality. You can also assemble a radio-controlled model yourself, for this you need to master the assembly of rather complex circuits, since the reliable transmission of commands over the radio channel is not the most trivial task in electronics. There is an alternative option – assembling a car with your own hands, which independently travels along a predetermined black line. By drawing a line in a special way, you can make the car, for example, overcome small obstacles or get out of the maze. One of the interesting options for the game is to draw a black line from one room to another and start the car for a friend who is in another room and back. Unlike the radio-controlled model, assembling the entire electronic circuit for such a machine is not difficult even for a person who first picks up a soldering iron. The diagram is presented below.
Its advantage is the absence of microcircuits and microcontrollers that would have to be pre-flashed. The whole circuit consists of three transistors, three resistors and one optocoupler, which will directly follow the drawn black line. The machine will be powered by a motor mounted on a wheel. An important condition is that the scheme must be assembled in two copies, one for each wheel. When two motors rotate at the same time, the machine goes straight forward, if only one of the motors rotates, the machine turns in one direction or another. An interesting detail in the circuit is the optocoupler – the CNY70 is suitable for use, it is an infrared LED in the same package with a phototransistor. If a white object is placed in front of the optocoupler body, then it will reflect a significant part of the IR radiation onto the phototransistor and the latter will open slightly, but if a black object is placed in front of the optocoupler, almost all IR rays will be absorbed and will not reach the phototransistor, it will remain closed. On this simple principle, all the work of the robot car is carried out. In the photo below you can see the CNY70 optocoupler, it has a convenient housing for placement on a typewriter. If you couldn't get one, you can get by with a homemade optocoupler from an IR LED and an IR phototransistor, placing them so that the reflected light of the LED hits the transistor. 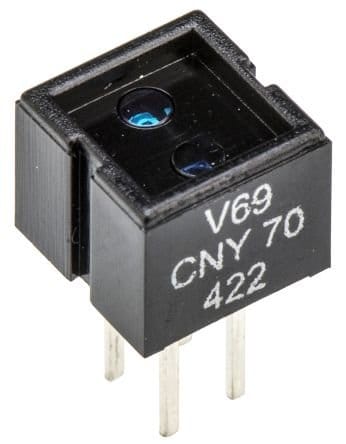 Resistor R1 sets the brightness of the LED in the optocoupler, by changing its value, you can adjust the sensitivity of the machine's “eye”. Transistor Q1 inverts the signal, so the motor (indicated by an inverted “M” in the diagram) will rotate when there is a white surface in front of the optocoupler. Transistor Q3 switches the motor itself by supplying voltage to it from the power supply. The supply voltage of the circuit is 5 – 12V, please note that the motor used must be rated for a voltage not lower than the voltage from which the circuit will be powered. For power supply, for example, 4-6 AA or AAA batteries are suitable, you can also use the Kronu battery, but it will not last for a long time due to the high current consumption of the machine's motors.
The printed circuit board for the circuit is presented below, it already involves assembly in two copies.
The design of the machine itself assumes three points of support – two driving wheels and an average support for stability, it should allow the machine to turn freely in one and the other side. As a machine frame, you can use, for example, the printed circuit board itself.

The motors used must be with gearboxes, so that the rpm is not too high, and the torque is enough to move the entire structure. When assembling, the optocouplers should be placed at a distance of about 1.5 – 2 cm from each other for stable line recognition, the line itself is easiest to draw with a black washable marker on a white flat surface, as shown in the photo below.
The resulting robot can be an excellent toy for children and adults, as well as a visual aid on the operation of transistors and optocouplers. Happy build!