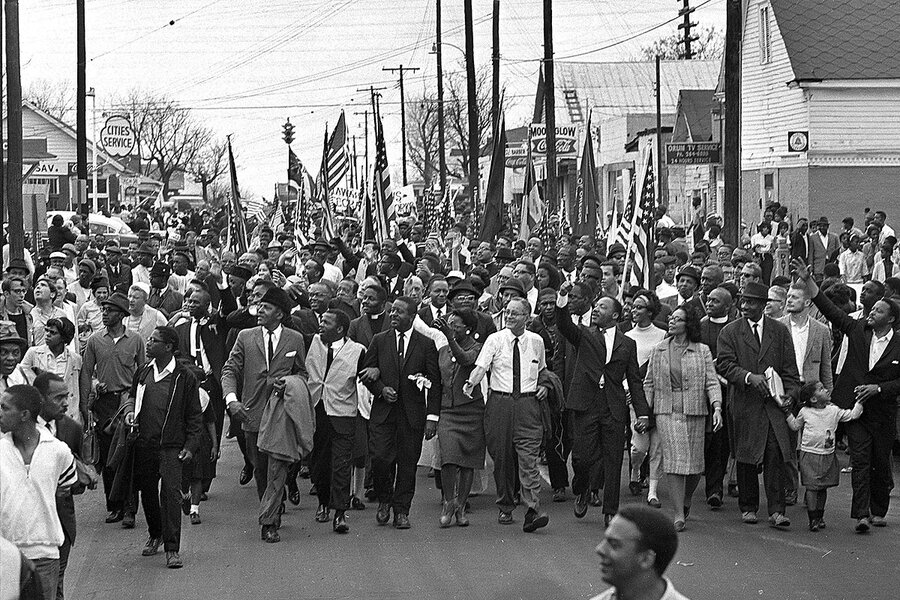 It was as close to the Rev. Dr. Martin Luther King Jr. – and to history in the making – as I would ever get, that bright Sunday morning in Selma, Alabama, in March 1965.

“Walk together, children,” Dr. King implored us from the steps of Brown Chapel AME Church at the start of the Selma-to-
Montgomery voting rights march. “Don’t you get weary, and it will lead us to the Promised Land. And Alabama will be a new Alabama, and America will be a new America.”

It was heady stuff, to be sure, with Dr. King’s voice rising as he said we would be serving a cause greater than ourselves. That, to me at least, was something of a new idea.

I was born in Chicago – a privileged white kid whose father would later build a house on 5 acres of farmland near the all-white community of Crystal Lake, about 30 miles northwest of the city, where my sister and I were raised.

My high school friends were a good-natured and happy-go-lucky bunch. One of them said he wanted to be a millionaire by the time he was 30, and we thought that was a great idea. We didn’t study much. We played sports, we hung out, and we attended church on Sunday.

After high school, I entered Ripon College, a small liberal arts college located in south-central Wisconsin, where I met the Rev. Herman Jerome “Jerry” Thompson, the college chaplain, who had clearly missed the millionaire train. I would learn that he was interested in other things.

Like many at the school, Mr. Thompson was appalled by the violence in faraway Selma on March 7, 1965. That’s when Alabama state troopers and sheriff’s deputies had viciously beaten back several hundred peaceful Black demonstrators led by John Lewis. They had been attempting to march to Montgomery, the state capital, to press Gov. George Wallace to ensure equal voting rights for all state residents, regardless of race. The next day, Dr. King issued a call to clergy from around the country to come to Selma to continue the march. No American, he said, was “without responsibility” for what had happened there and for the “eruption of the disease of racism, which seeks to destroy America.”

Days later, Mr. Thompson summoned several of us – mostly students in his world religions class – to discuss what we could do, even as other students on campus argued that the problems of the South should be left to Southerners. We in his office agreed that sending money or good wishes would be crass and cowardly. We should show our support in person.

It took us a week to make our way by car and public transportation through the Jim Crow South with our sleeping bags and Northern accents, wondering if we would be attacked by local white racists. I did not tell my parents what I was doing, as I thought they might worry. We arrived in Selma a few days before the march was due to begin. We joined about 2,000 others from around the country, more than half of them white.

The local white population was not amused, including law enforcement.

“You are here to cause trouble,” Dallas County Sheriff Jim Clark told us. “You don’t live here. You are an [outside] agitator, and that’s the lowest form of humanity.”

After Dr. King’s speech outside Brown Chapel AME Church on Sunday, March 21, 1965, Mr. Thompson and I and two other Ripon College students, Richard Grimsrud and Noel Carota, joined about 3,000 others to participate in the march to Montgomery along U.S. Highway 80.

Over the next five days, we endured rain and racist taunts from white people who lined the highway. But we were joined by thousands more sympathizers en route. By the time we reached Montgomery, there were 25,000 of us.

This time, federal troops were in charge, and they protected us. Governor Wallace refused to see us, but the message had been delivered.

Months later, on Aug. 6, President Lyn­don B. Johnson signed the Voting Rights Act of 1965, forbidding discriminatory voter registration policies and practices that had disenfranchised millions of Black Americans. It is widely thought that the president and Congress would not have acted so quickly, if at all, had it not been for Selma.

Mr. Lewis told me before he died last year that, in his opinion, the Selma-to-Montgomery march had a profound impact on America’s psyche, and that white students from the North had played a crucial role in the success of the march.

Throughout his life, Mr. Lewis had urged anyone who would listen to make “good trouble, necessary trouble” – nonviolent trouble – in the fight for justice.

Now, more than 50 years later, I am at a loss to satisfactorily explain what drew me to Mr. Thompson’s office that day in early March 1965, and from there to Selma. It certainly had something to do with his inspiring passion for justice and for lifting up others. It was also the cause being pursued. It might, too, have been something in the 1960s air – or even the prospect of momentarily escaping the lingering Wisconsin winter.

When I told my parents what I’d done, they said they were proud of me. In response, I might have said – and would certainly say today – that in Selma I had learned for the first time a real-life lesson in the importance of sometimes making “good trouble, necessary trouble.”

The author was the Monitor’s Brussels-based correspondent from 1975 to 1987.