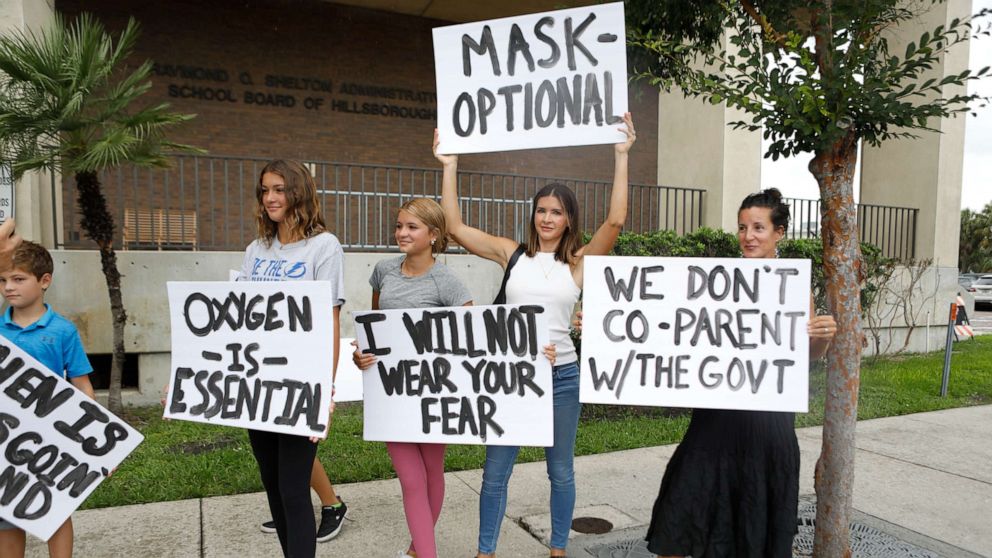 It takes less than ever to find partisan grooves these days — and the fact that they’ve been etched deeper out of the fallout from Jan. 6 serves as a case in point.

That’s the reality that confronts President Joe Biden with this next uncertain phase of combatting the pandemic. New federal guidance on mask mandates and the consideration of a vaccine requirement for federal workers run into longstanding political arguments about individual liberties and personal accountability.

The push for vaccinations has become less partisan of late, with prominent Republicans adding new emphasis — and giving special credit to the previous administration — to make the case.

Yet mask-wearing and vaccine requirements have long since taken on cultural as well as political significance, and the fallout of Biden’s latest comments offer just a taste. Former President Donald Trump is offering strong pushback to mandates, and consider as well how readily some Republicans are using Dr. Anthony Fauci as a foil — raising money off the mention of his name, and even threatening legal action against him.

Biden indicated that he will outline next steps in the push to vaccinate the country on Thursday, as some statistics showing rates going up of late. The president on Tuesday also served up a reminder that as a candidate he “promised to be straight with you about COVID — good news or bad.”

Another reminder: 11 months ago, Biden said he wouldn’t hesitate to order another shutdown if that’s what his advisers recommended.

“I would shut it down; I would listen to the scientists,” he told ABC “World News Tonight” Anchor David Muir last August.

The campaign was quick to clarify that comment at the time. Biden’s statement Tuesday about masks and vaccines framed them as a way “to avoid the kind of lockdowns, shutdowns, school closures and disruptions we faced in 2020.”

“We are not going back to that,” the president said.

Dunn’s heartbreaking testimony chronicled the racial slurs he endured as he tried to defend the seat of our nation’s democracy.

Among the insurrectionists were attackers who carried Confederate flags, donned shirts with anti-Semitic messages and freely hurled the n-word at Black officers.

“No one had ever, ever called me a n***** while wearing the uniform of a Capitol Police officer,” said Dunn.

He also brought with him the stories of other Black officers, later adding, “Another Black officer later told me he had been confronted by insurrectionists in the Capitol who told him, put your gun down and we’ll show you what kind of n***** you really are.”

For many, listening to Dunn recount the epithets stung as they were broadcast uncensored. The attack at the Capitol is often referred to as one of our nation’s darkest days, it’s particularly poignant that racism crept its way into the ugliness of it all, too.

It’s a vile reminder that racism in America, even in its most blatant forms, still exists.

Republicans in Washington have one more representative joining their ranks — but the victory serves as an upset to Trump, despite his looming influence over the Republican Party on a national scale.

Nearly three months after the May 1 special election, State Rep. Jake Ellzey came out on top in Tuesday’s runoff election for Texas’ 6th Congressional District. Ellzey faced off with fellow Republican, Susan Wright, who had Trump’s backing going into the contest due to the political legacy of her late husband, Rep. Ron Wright, who died in February from COVID and complications with cancer.

The conclusion of the race is the latest indicator of the former president’s looming influence over his party in a state that is increasingly becoming ground zero for intraparty battles.

On Monday, Trump waded into another high-profile Texan battle by endorsing incumbent Attorney General Ken Paxton for another term. The move served a devastating — and complicated — blow to Land Commissioner George P. Bush, who was the only member of his storied political family to publicly back Trump, despite the former president launching repeated attacks against his father, Jeb Bush.