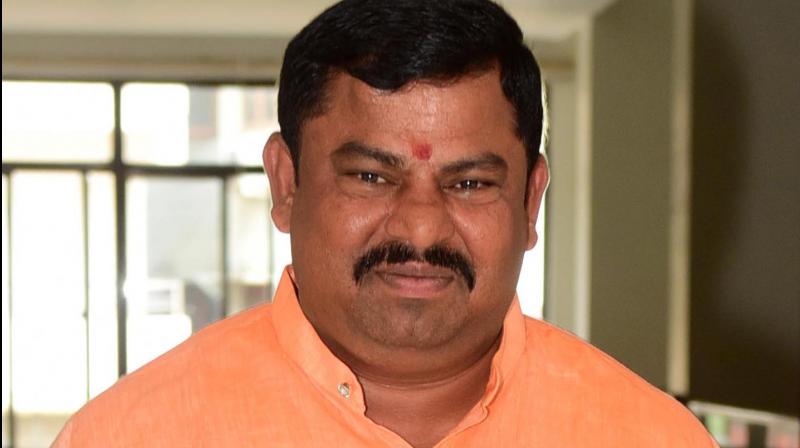 Hyderabad: The Begum Bazaar police took three BJP activists into preventive arrest at a temple that has been allegedly constructed at Bhagyanagar Colony in Nampally.

Speaking to Deccan Chronicle, Avinash Mullangi, an local resident, said that BJP activists, reportedly following the orders of Goshamahal MLA Raja Singh, were trying to encroach on the community space.

“This illegal construction has been happening since 2014. Initially, two families placed cement bricks under a tree. We lodged complaints, and the work stopped for three years. One morning in 2018, we woke up to a small marble construction with a photograph of an idol inside. It was installed overnight. During the 2018 Bonalu they started installing iron pillars around the place,” said Mullangi,

Following a complaint, the DCP had ordered a probe and asked that the pillars be taken down. Nothing was done and one Giridhar Raju, who claims to be president of the temple, started laying tiles on the floor and strengthening the pillars, he said.

On Friday, a group of people began praying at the temple, Mullangi said. The police was intimated, and they sent teams to maintain peace. The police put Giridhar Raju, Bharat and another person under preventive custody and released them later.

Meanwhile, Raja Singh posted a video on his Facebook page and warned the public and police to stay away from the temple.

“Bhagyanagar colony consists of 200 flats, out of which about 10 are occupied by Muslims and Christians. The temple was installed by old residents and I have been visiting it from my days as a corporator. Now, these families in are creating problems for us,” he alleged.

“Cops arresting activists is nothing new to us. I want to tell the residents of the colony that they must live peacefully without creating an issue. To the cops, I want to convey that though the temple is small now, we will make it bigger. Nobody can do anything.”

Asked about the issue, Abids ACP Venkat Reddy said that police had been sent to avoid communal issues and no case had been booked. “It is a sensitive issue and the community people should internally also address this,” he said.

Culture wars threaten to overtake war on COVID: The Note