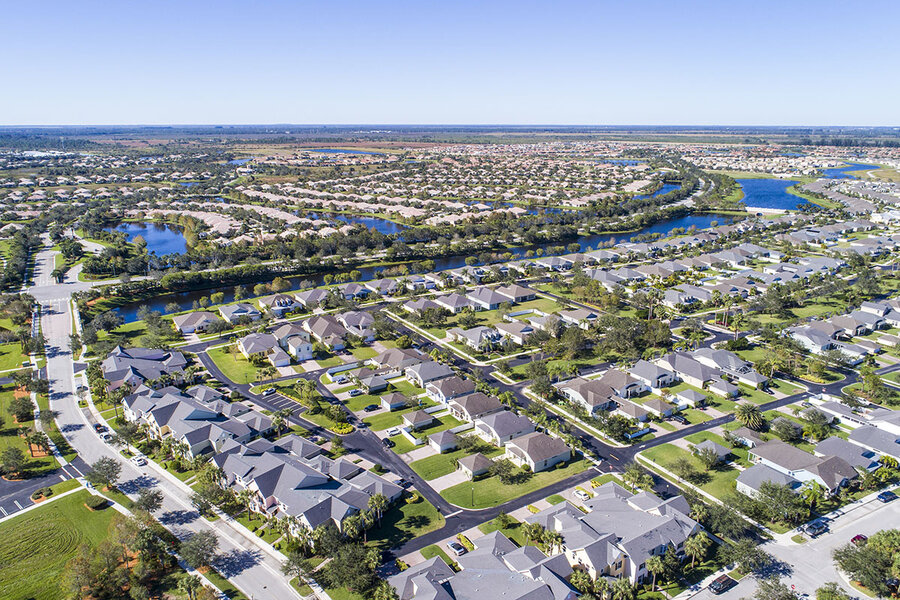 Alex Martinez has a curious observation about his hometown of Port St. Lucie, Florida. Though the city of 200,000 is 20% Latino, “There’s no ‘Hispanic’ neighborhood.” Though it is 18% Black, “there’s no ‘Black neighborhood,’” either.

Then, the local insurance broker who moved here in the early 1990s goes further: “And there’s really no poor or economically blighted areas here in town.”

To the unaware, Port St. Lucie might look like a rather nondescript Florida town, sprawling and sedate – a suburb in search of a city with nothing that resembled a downtown until developers built one about two decades ago.

Segregation in the United States is rising, contributing to racial tensions and creating roadblocks to a more equal and integrated society. But Port St. Lucie, Florida, is bucking the trend.

But that might be its genius. According to a recent study, only two of 113 of the largest cities in the United States qualify as integrated. And one is Port St. Lucie. (The other is Colorado Springs, Colorado.)

The trend is of momentous importance. Throughout American history, racially segregated neighborhoods have been a fundamental driver of profound racial disparities in education, policing, health care, and income. “Racial residential segregation is the glue that holds all these forms of systemic racism together,” Stephen Menendian, an author of the report, told The Atlantic. “You can’t solve extreme racial inequality in a segregated society.”

Port St. Lucie’s lessons are not cut and dried. A popular Black radio personality recalls the time about 10 years ago that someone threw a baseball inscribed with racial epithets through the front window of his home. And there has never been a Black city council member on Port St. Lucie’s five-seat council.

But a combination of factors – from Port St. Lucie’s relative newness as a town to the presence of a strong military community – all play some role in making it less segregated at the neighborhood level. And that has shaped the town in unusual ways. Poverty here is not found disproportionately among minority populations, and among all Florida cities with a population of more than 100,000, Port St. Lucie experienced the lowest number of crimes in 2020, according to the Florida Department of Law Enforcement’s 2019 Uniform Crime Report.

“The integration of the neighborhoods here in Port St. Lucie has always held solid,” says Mr. Martinez, who was a former professional jai alai player before moving to Port St. Lucie.

Data point to the value of desegregated neighborhoods. When regions, cities, and neighborhoods are well integrated, many racial disparities tend to get smaller, notes Mr. Menendian, director of research at the Othering & Belonging Institute at the University of California, Berkeley, in an interview.

Similar trends are apparent in Port St. Lucie. Poverty rates in the city reflect the diversity of the city itself. About 60% of its poorer residents are white, 13% are Black, and 18% Latino, according to an analysis of Census Bureau estimates by DataUSA.

Why Port St. Lucie is different

In many ways, Port St. Lucie was able to develop in ways unburdened by the legacies of historic segregation. In 1961, it was still a region of farms and fishing camps with a population of 330. From the start, Port St. Lucie emerged as a community with affordable housing. In fact, about 77% of Port St. Lucie’s integrated residents own homes across the diversity of its demographics.

In the first decade after Port St. Lucie’s incorporation, the General Development Corporation (GDC) designed a series of subdivisions with winding and curving roads rather than grids – an aesthetic decision that turned out to help shape its integrated character, says Paddy McCallister, a writer for Veteran’s Voice, which provides news for the area’s veteran population.

“It was that combination of things that came together to create communities that didn’t have that traditional right side and wrong side of the tracks kind of infrastructure,” he says. “And I’ll say now, I think the racial integration is mostly because the GDC started constructing homes after the Fair Housing Act. So, there’s really no redlining legacy present in its current infrastructure.”

Plus, the developers didn’t care who came. They were “building a lot of houses, and so they needed a lot of buyers, and they aggressively went to places like New York City – basically anywhere that they could find people who had money and wanted to buy a house in Florida,” Mr. McCallister says. “They were not picky about who was giving them money; they just wanted money.”

A higher-than-average presence of veterans and other military also contributes to the city’s integrated characters, says Mr. Menendian. The U.S. armed forces, he believes, demands the kind of positive intergroup cohesion, rooted in common goals and equal status, that help form well-integrated societies.

“The military creates a kind belonging that does not exist in American society,” he says.

“I can’t say that about other places”

Rudy Howard, who had the baseball thrown through his window, is generally positive on Port St. Lucie’s racial dynamics. The city’s integrated character has helped inoculate the region from many of the tensions that have erupted between residents of color and police.

“I haven’t had a bad experience with the police here in Port St. Lucie, and I’ve lived all up and down the east coast of Florida, and I can’t say that about other places,” says Mr. Howard.

Mr. Howard has played no small part in shaping the community here. A small-business owner and past president of its Chamber of Commerce, he spearheaded the creation of the region’s Economic Development Council, chaired its Expressway and Bridge Authority, and has sat on the boards of two local hospitals.

But before he went on air to host his weekly “African American Scene” radio show recently, Mr. Howard had been pondering what true belonging means.

“I know this is kind of a different spin on what I normally would do, but I have some words that I’d like for us to play with a little bit,” Mr. Howard told his listeners, introducing a series of intimate questions: What is love? What is friendship? What is family?

These deeper questions are experiences that embody the essence of belonging, he said.

A sense of belonging

For social psychologists and others, integration is a crucial variable, too. Differing groups must be able to share common goals, cooperate as equals, and find support in their society’s laws and institutions. “All of the resources and institutions that matter in contemporary society are predominantly shaped by residential location,” says Mr. Menendian.

One drawback, says Mr. Howard, is that integration can sometimes make problems seem more diffuse. “Because Port St. Lucie is so spread out, and there’s not a Black community or neighborhood, there is an illusion that there are no problems for minority kids, and that’s just not the case,” he says. “It’s just not open and obvious unless you’re a member of the community.”

Increased political representation would help, he says. “The number one thing right now is a lack of diversity in terms of administration and representation on the city council.”

Despite some negative experiences, Mr. Howard says Port St. Lucie has a lot to celebrate.

“On Friday nights when I sat in the stands to watch my son play high school football, I would look out at the kids and their families coming to the game. … It was like it was United Nations,” he says.

When his family hosts neighborhood cookouts, there is a remarkable ethnic mix in his backyard.

“I used to think to myself sometimes, I wish I could take this picture and give it to everybody and say, ‘Look, this is what we could be if we let ourselves be this.’”

Bipartisan infrastructure bill unveiled. Up next, a Senate vote