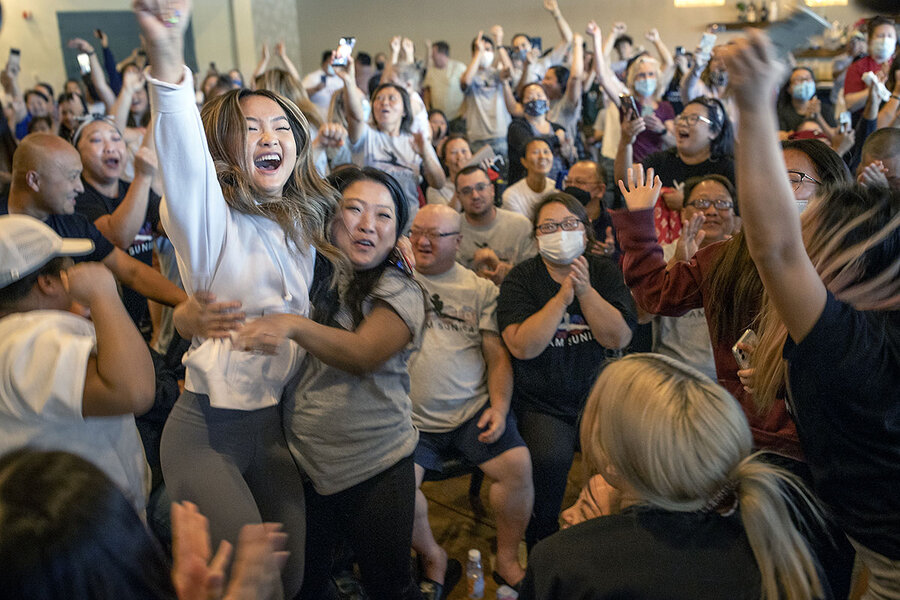 Cecelia Lee never imagined her family could be so quiet. But as she and 300 of Sunisa Lee’s family members and friends gathered in an Oakdale, Minnesota, events center last week to cheer her on thousands of miles away at the Tokyo Olympics, the gymnast’s aunt says the room reached “cricket silence.”

Judges were about to announce the winner of the individual all-around final – the most prestigious title for an Olympic gymnast. And then what they’d only dared dream about happened. Ms. Lee, the first-ever Hmong American to participate in an Olympic Games, won – becoming the fifth American woman to do so in a row.

“It felt so amazing; we had so much pride in knowing that she got it,” says Cecelia Lee. “All of us were feeling like, this doesn’t happen to an ordinary person, and then one day it does. It’s surreal.”

The viewing party was just one of many events that Minnesota’s Hmong community has organized in her honor over the years. It’s held fundraisers to raise money toward her training and travel, and a large send-off in the days before she headed to Tokyo – which she was unable to attend due to COVID-19 concerns.

“Gymnastics can be a costly sport, so anytime funds dried up, there was no doubt, we were going to step in and help,” says Cecelia Lee.

The support of Sunisa Lee’s large family – she is one of six children – and the Hmong community in Minnesota has been crucial in catapulting her to success. Her parents have backed her dreams of being an Olympic gymnast, with father John once building her a makeshift balance beam to practice on in the backyard.

In Hmong American communities, where children see few professional athletes they can identify with, sports are often viewed as more of a hobby than a path to success. But Ms. Lee’s accomplishments – in addition to her individual gold, a team silver and now a bronze in uneven bars – are reshaping that image, and shining a spotlight on the community as a whole. As Ms. Lee looks to her final balance beam event Tuesday, she’s bringing more than pride; she’s changing perceptions about what it means to be Hmong American, both inside and outside the community.

“Forty years ago, no one thought the Hmong people could move from surviving in the jungles [of Asia] to the jungles of America. They underestimated us,” says Lee Pao Xiong, director of the Center for Hmong Studies at Concordia University, St. Paul, who came to the United States as a refugee at 9 years old. “Sunisa, a child of refugees, has won at the Olympics. We’re so emotional. It epitomizes the hopes and dreams our parents had for us: Work hard and you’ll be successful. It’s possible in America, the land of opportunity.”

“You can do what you love”

The Hmong people, an ethnic group living mainly in mountainous regions of China, Laos, and Vietnam, hold an important place in U.S. history. In the 1960s, amid the Vietnam War, the CIA recruited thousands of Hmong men in Laos, known as the “Secret Army,” to fight alongside U.S. soldiers. Meanwhile, those who remained saw their towns bombed and burned, and many were displaced.

In the 1970s, the first wave of Hmong refugees arrived in the U.S., and Minnesota is now home to one of the largest populations in the country, at more than 66,000. Nearly 60% of Hmong Americans are considered low-income, and 1 in 4 live below the poverty line, according to a legal aid group, Asian Americans Advancing Justice-Los Angeles.

In the U.S., many parents put a premium on education as the best way for their children to get ahead.

“Women especially are very much pushed to get married and have children, but the main focus is on education. … Go out, get a higher degree. That’s the key to having a successful future,” says Kang Vang, a filmmaker who teaches citizenship classes at the Hmong Cultural Center in St. Paul. “I think parents see it as, those who are educated don’t have to have the physically hard lifestyle they may have had themselves.”

Even if many parents may not see sports as a means to an end, athletics are a vibrant part of the community. Every July, St. Paul holds the Midwest Hmong International Freedom Festival to display the sports, arts, and music talents of Hmong people from around the world. Hmong pro athletes include soccer players, a golfer, and an ice skater, and badminton is huge in high schools.

Still, for many young people, putting extracurriculars first often means forging a parent’s signature or fibbing about where they’re going after school. Lue “Finisher” Thao is a St. Paul-based break dancer who says in high school his parents thought he was in a gang, as he often sneaked out at night. But he was only going to dance at the local rec center or at friends’ houses.

Now, even if Mr. Thao runs his Cypher Side Dance School in St. Paul and danced at the 2018 Super Bowl halftime show, his parents remain skeptical about his career choice. He hopes Ms. Lee’s win will help other parents recognize nontraditional life paths.

“It’s so awesome to see a Hmong American paving the way, to show you don’t have to be a doctor or lawyer,” says Mr. Thao. “You can do what you love to do if it’s a positive thing; you just have to work hard for it.”

Ms. Lee’s all-around title comes at a time when the Asian American community needed a win. Hate crimes against Asians in America rose sharply in 2020, according to advocacy groups, and António Guterres, the United Nations secretary-general, has expressed profound concern over spikes in violence against people of Asian descent during the pandemic.

Watching an Asian American athlete reach international fame not only helps overturn general stereotypes, but it could also be an opportunity to educate Americans about the Hmong community, specifically.

“We get a lot of questions, like ‘Who are the Huh-mongs’ or ‘Are you from Mongolia?’” says Cecelia Lee, Sunisa’s aunt. “They’re not trying to be disrespectful, but I hope [Sunisa’s visibility] will educate the country, not just about the Hmong people but everyone who is from a different community.”

The young gymnast is already having an impact on her hometown. Following her all-around gold, Minnesota Gov. Tim Walz declared last Friday “Sunisa Lee Day” in her honor.

And more parents within Minnesota’s Hmong community are starting to see the benefits of gymnastics specifically. Ms. Lee’s coaches at Midwest Gymnastics Center, where she has trained since she was 6, say the gym has started to see more Hmong American girls, and Asian Americans in general, since she became a household name in the past few years.

“Now that parents are seeing that athletics can be a path to education, they’re starting to see things in a different light,” says Punnarith Koy, Ms. Lee’s first coach. She will head to Auburn University in the fall on a full gymnastics scholarship. “[Her win] will have a huge impact. Anyone at her level is an instant role model.”