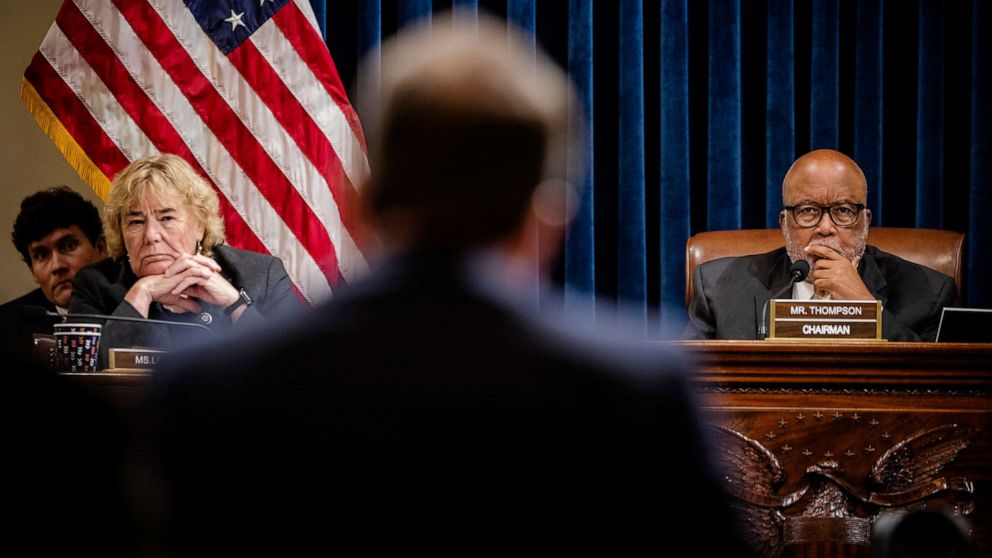 A day after its first hearing with emotional testimony from police officers brought the Jan 6. Capitol attack back into the national spotlight, the House select committee investigating the assault will meet this week on possible next steps, including issuing subpoenas.

“I have no reluctance whatsoever in issuing subpoenas for information,” Chairman Bennie Thompson, D-Miss., told MSNBC’s “Morning Joe” Wednesday morning, asserting the committee “absolutely” has the authority. “Nothing is off limits in this investigation.”

His comment comes after the Department of Justice said in letters to former DOJ officials and provided to congressional committees that they can participate in investigations related to Jan. 6, according to sources and letters reviewed by ABC News Tuesday, which the House Oversight Committee later confirmed. Therefore, if witnesses try to fight subpoenas, they may have to do so on their own dime.

“Members of Congress have already admitted that they talked to the White House while it was going on. Now many of them are trying to walk back the conversation they had,” Thompson said. “We plan to pursue it.”

Rep. Liz Cheney, R-Wyo., who sits on the committee, told ABC News’ George Stephanopoulos that the committee had not ruled out calling Rep. Jim Jordan, R-Ohio, who has criticized the committee and was vetoed from it by House Speaker Pelosi over comments she said would damage its credibility, to testify.

Jordan admitted on Tuesday evening that he — like GOP Leader Kevin McCarthy — spoke to former President Donald Trump on the phone on Jan. 6, and in another interview Wednesday with Ohio Spectrum News reporter Taylor Popielarz, confirmed he spoke to Trump on Jan. 6.

Asked by Popielarz if he spoke to Trump before during or after the attack, Jordan said he didn’t remember.

Baier followed up, “But I mean on January 6, congressman.”

Conversations in Trump’s orbit, such as the apparent call with Jordan, are key to what the committee is seeking to investigate, with Cheney saying Tuesday that Americans should know what happened “what happened every minute of that day in the White House.”

House Speaker Nancy Pelosi affirmed the committee’s subpoena power in her weekly news conference on Capitol Hill, but distanced herself from the committee itself as House Republican leaders disparaged the two GOP members who joined the panel as “Pelosi Republicans.”

When asked what will happen if House members don’t comply with subpoenas, Pelosi emphasized she is not involved with the select committee and “has not been a party to any of those decisions, so I cannot tell you what they might decide.”

The speaker also dismissed concerns that there will be political backlash if the committee’s work drags out or loses momentum, asked if she would like to see the committee move more expeditiously.

“They will take the time that they need,” she said. “We were very late in getting to this because we were striving for the bipartisan commission, which we thought was very possible.”

While lawmakers have a seven-week recess coming up, Thompson said Wednesday that the committee will meet again to discuss its next steps this week.

“We’ll have a meeting before we break for the August recess, but in reality, I think you know we’ll be back during that recess doing our work because we have to get to the bottom of it,” he told MSNBC. “Our democracy depends on it.”

At its first hearing, the committee heard from four officers who recounted they feared for their lives on Jan. 6 as they were brutally beaten and outnumbered by a pro-Trump mob. One officer described fearing he would be “torn apart” and chants of “kill him with his own gun.” Another said he was taunted with racial slurs in uniform for the first time in his career.

They all criticized lawmakers who have downplayed the attack and pleaded with the panel to uncover if those in power aided and abetted rioters, including the former president.

“There was an attack on Jan. 6, and a hit man sent them,” said Capitol Police officer Harry Dunn. “I want you to get to the bottom of that.”

Democrats are already coming to the defense of the officers after right-leaning cable news hosts attacked the testimonies as performative Tuesday night.

“Stupidity has no reach. It can go anywhere. It’s unfortunate that people would interpret the brave people who defended the Capitol as somehow disingenuous in their presentations,” Thompson said Wednesday.

While Capitol police officers watched the hearing on TVs and phones in the hallways of the building that was attacked, Republican leaders who blocked efforts to investigate the day dismissed the hearing as a political play and said they didn’t watch.

Senate GOP Mitch McConnell, who said after the attack that the “mob was fed lies” and “provoked by the president and other powerful people,” said he was “busy doing work” during the hearing.

“I don’t see how I could have expressed myself more forthrightly than I did on that occasion, and I stand by everything I said,” he said.

McCarthy, who held an event outside the Capitol ahead of the hearing as a preemptive strike to the officers’ testimony, told a Politico reporter he wasn’t able to because he was stuck in “back-to-back meetings.”

Notably, McCarthy has suggested Pelosi didn’t do enough to secure the Capitol that day, but McConnell, as leader of the Senate, has not faced the same criticism. Security at the Capitol is controlled by the Capitol Police Board.

GOP Rep. Matthew Rosendale of Montana told ABC News he only watched the opening statement from Cheney, who was ousted as the No. 3 House Republican earlier this year following her criticism of Trump’s role on Jan. 6.

“I was quite disappointed,” he said, before launching into a series of questions he wanted to be answered.

But because Republicans gave up their ability to participate in the hearing, with McCarthy withdrawing all of his members, they couldn’t lead the discussion in their preferred direction.

Rep. Pete Aguilar, D-Calif, who sits on the committee, blasted Republicans to ABC News who chose not to hear from the officers who helped protect them.

“For Kevin McCarthy and for my colleague from Montana to just say, ‘Oh I didn’t have the time to watch this hearing,’ you know, is just unfortunate and sad, and they just want to play politics with this,” he said. “That’s all this is.”

Aguilar added the public can expect more public hearings to come, though the date for the committee’s next hearing has not yet been announced.

GOP mask defiance is all about the 2022 ballot box